Blood samples were obtained on six days within two two-week periods in February and October, 2008. Plasma 25OHD, serum intact parathyroid hormone (PTH) and 1?,25-dihydroxyvitamin D 1?,25(OH)(2)D were measured. Individual monthly mean 25OHD levels were 16-56% higher in October than in February (p=0.03), while individual monthly mean intact PTH levels were 15-41% lower in October (p=0.09). No seasonal change was observed in 1?,25(OH)(2)D (p=0.62). Notably, nearly all measured 25OHD levels in February were lower than the reference value of 20 ng/ml. Our study identified the occurrence of seasonal variation in circulating 25OHD and intact PTH levels, even after accounting for inter-day variability, and hypovitaminosis D in wintertime in indoor daytime male workers in Japan. Due to this variability, single spot measurements of 25OHD may lead to misjudgment of workers' vitamin D status.

Study is attached at the bottom on this page 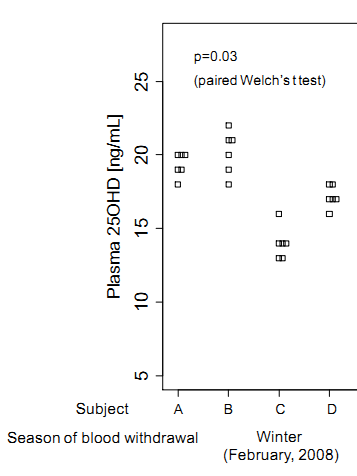 Printer Friendly PDF this page! Follow this page for updates
This page is in the following categories (# of items in each category)
Tests for Vitamin D 140
Edit Comments Files 2