All hypertension patients should have vitamin D levels measured – 2010

Should the Concentration of Vitamin D be Measured in All Patients with Hypertension? 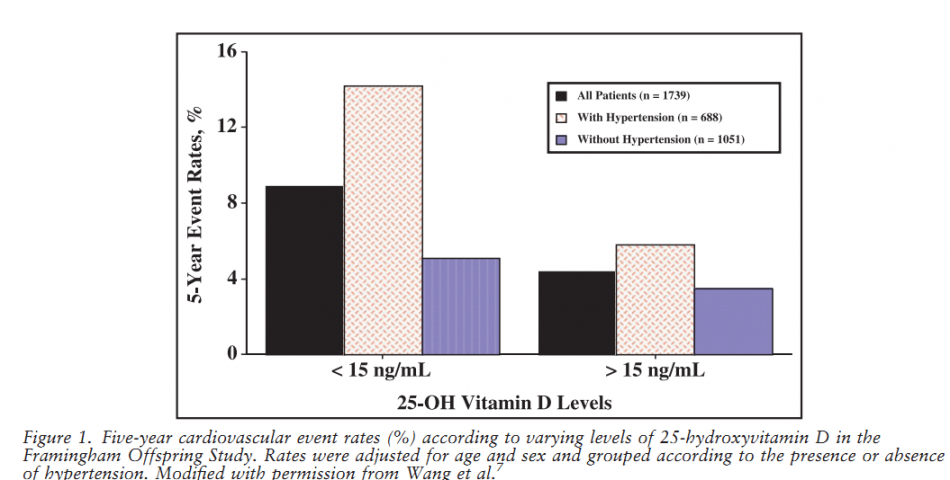 Epidemiologic association between Vitamin D deficiency and hypertension— Data from the INTERSALT study suggest a rise in BP is proportional to distance from the equator 12 while seasonal variations in BP have also been reported in temperate climates 13.

Population studies have shown an inverse relationship between vitamin D levels and hypertension, with increasing incidence of hypertension as Vitamin D levels decrease 6,14. The largest database is from Forman and colleagues (6) using 117,730 subjects from the Health Professional follow-up study and the Nurse's Health Studies in which there was a median follow-up period of 4 years for the development of incident hypertension. When comparing those individuals whose 25-0H D levels were < 15 ng/ml versus those > 30 ng/ ml, the relative risk of developing hypertension was 3.18, with a marked gender difference (6.13 in men and 2.67 in women). Hence, a significant inverse relationship exists between vitamin D and development of hypertension.

With mounting evidence indicating the direct effect of vitamin D on the vascular smooth muscle cell, endothelial function and the renin-angiotensin-aldosterone system, it is clear that randomized trials of vitamin D replacement and renin and angiotensin inhibition in patients with hypertension and vitamin D deficiency are warranted. Preliminary research has shown an inverse relationship between BP and vitamin D levels, and supplementation appears promising. To that end, we have just initiated a randomized clinical trial evaluating the effects of vitamin D and/or a renin inhibitor on ambulatory and clinic BP in vitamin D deficient patients with hypertension (clinical trials.gov identifier NCT00974922).

The high prevalence of vitamin D deficiency and insufficiency, particularly in northern latitudes and during the winter months, supports determining 25-hydroxyvitamin D levels in patients with hypertension and supplementation provided to those whose levels are < 30 ng/ ml. It is noteworthy that recommended 25-OH D levels of > 30 ng/ml (75 nmol/L) are unlikely to be achieved with the previous recommendation of 200 IU for younger people and
600 IU of vitamin D for older adults 3.

Doses of vitamin D3 from 1000 to 2000 IU daily are often required 4,25. For every 100 IU of vitamin D ingested, the levels in patients with vitamin D deficiency should increase by 1 ng/ml 4.

Therefore, to bring most of the adult population to levels of > 30 ng/ml, vitamin D supplementation of 1000 IU would be required in most, but even doses as high as 4,000 I.U. are safe for short-term ‘loading’, and would bring about 90% of the population to levels above 30 ng/ml within a few weeks.

Noticed that Dr. White is also involved in a clinical trial

All hypertension patients should have vitamin D levels measured – 2010         Printer Friendly PDF this page! Follow this page for updates
This page is in the following categories (# of items in each category)