Vitamin D and aging: Beyond calcium and bone metabolism

Background
Low serum 25-hydroxyvitamin D (25OHD) levels are common and may be associated with morbidity and mortality (and indeed with frailty more generally). This association is not restricted to the links between vitamin D and calcium and bone metabolism.

Objective
To review the influences of vitamin D on the aging process other than those related to bone and calcium. Its effect on mortality is also assessed.

Methods
The PubMed database was searched for English-language articles relating to vitamin D, using the following MeSH terms: vitamin D, mortality, cardiovascular diseases, and frailty. In addition, searches were carried out with Google.

Conclusion
The aging process and mortality are associated with low vitamin D levels. Prospective controlled trials are warranted to determine whether vitamin D supplements can increase longevity and reduce the incidence of certain conditions. 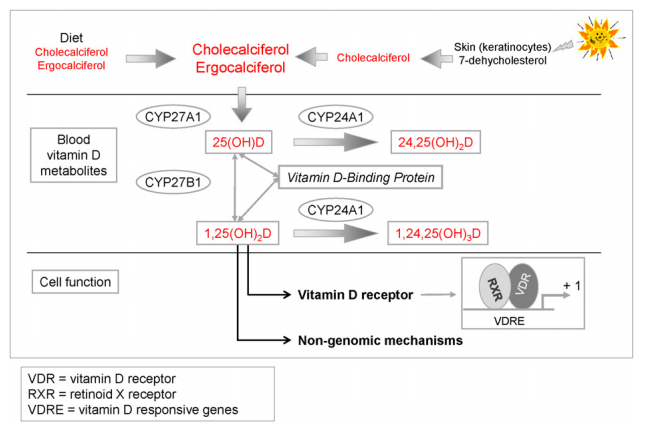 Low vitamin D associated with all-cause mortality and frailty – Mar 2011         Printer Friendly PDF this page! Follow this page for updates
This page is in the following categories (# of items in each category)