Factors affecting changes in the serum levels of 25-hydroxyvitamin D: a 3-year follow-up of the ROAD study. 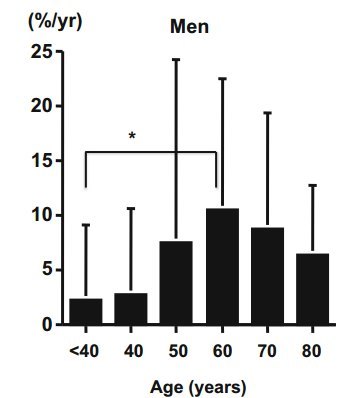 In this 3-year population-based cohort study, among 1346 subjects, the mean annual change in the serum 25-hydroxyvitamin D levels was 7.6 %/year, which tended to increase during the 3-year period. Multivariate regression analysis indicated that the L2-4 bone mineral density and total daily energy intake were significant independent associated factors.

INTRODUCTION:
The aim of this study was to clarify the change rate of the serum levels of 25-hydroxyvitamin D (25D) and the associated factors in a general Japanese population during a 3-year period.

METHODS:
The baseline survey of Research on Osteoarthritis/osteoporosis Against Disability study (ROAD), a large-scale population-based cohort study, was performed between 2005 and 2007, and a follow-up survey was repeated 3 years later. Among 1690 participants at baseline, the change rate of the serum 25D levels were assessed in 1346 individuals (79.6 %; 458 men and 888 women) who completed measurements of 25D at both the baseline and follow-up examinations. The change rate was calculated, and the factors associated with the changes in the 25D levels were determined using multivariate regression analysis after adjustment for age, gender, body mass index, participated month, and regional differences at baseline.

CONCLUSIONS:
The serum levels of 25D tended to increase over the 3-year period, and higher lumbar bone mineral density and daily energy intake were found to be associated with increases in the 25D levels over time.

Many seniors around the world have started vitamin D supplementation

Vitamin D levels increasing 7 percent per year, bones denser in Japan (probably supplementation) - June 2015         Printer Friendly PDF this page! Follow this page for updates
This page is in the following categories (# of items in each category)
Osteoporosis 200 Increased use of D 50