Vitamin D Is Not as Toxic as Was Once Thought: A Historical and an Up-to-Date Perspective 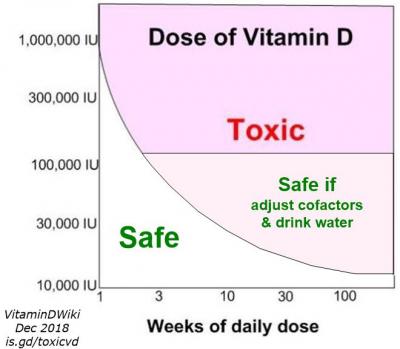 In the current issue of Mayo Clinic Proceedings, Dudenkov et al1 report on a retrospective study of serum 25-hydroxyvitamin D (25(OH)D) values in patients registered in the Rochester Epidemiology Project. The article reported that although serum 25(OH)D values of more than 50 ng/mL increased over the 10-year study period, vitamin D toxicity and hypercalcemia were exceedingly rare. To understand the importance of this finding as it relates to clinical care, it is useful to begin with a review of the history of hypovitaminosis D diagnosis and vitamin D replacement, followed by new insights into vitamin D offered in the recent literature.
In the late 19th and early 20th centuries, there was evidence of the growth retardation and bony deformities associated with rickets in more than 80% of the children living in cities on the East Coast of the United States and in cities throughout Europe.2 In 1921, Hess and Unger reported that exposing children to sunlight was an effective treatment for rickets. This was quickly followed by the observation that exposure of various foods to ultraviolet radiation imparted antirachitic activity. This led to the addition of ergosterol to milk that was then exposed to ultraviolet B radiation, which resulted in the production of vitamin D2. With the discoveries of vitamin D2 and vitamin D3 and the development of methods to cheaply produce these vitamins, they were used to directly fortify milk with vitamin D.2 Children who drank vitamin D—fortified milk no longer developed rickets. As a result of this success, vitamin D fortification became widespread throughout the United States and Europe.2,3 Not only milk but a wide variety of foods and beverages were fortified with vitamin D, including bread, soda pop, beer, custard, and even hot dogs.2 In the 1940s, vitamin D was thought to be effective for treating rheumatoid arthritis and massive doses of 200,⑻0 to 300,⑻0 IU/d were given. It was soon realized that these massive doses resulted in vitamin D intoxication, including hypercalcemia, hyperphosphatemia, nephrocalcinosis, kidney stones, and soft tissue calcifications. When the vitamin D treatment was stopped, it took months to years for the manifestation of vitamin D intoxication to resolve because this fat-soluble vitamin (stored in body fat) continued to be released back into the circulation. Thus, physicians were alerted to the potential of vitamin D being toxic. However, these experiences did not influence the fortification of foods and other products with vitamin D, which persisted until the 1950s.
In Great Britain in the early 1950s, several cases of infants with facial abnormalities, supravalvular aortic stenosis, mental retardation, and hypercalcemia were reported.4 This was followed by reports of hypercalcemia as high as 19 mg/dL in some infants.3 The Royal College of Physicians and the British Pediatric Association were charged with finding the cause for these unusual occurrences. After careful scrutiny of the literature and surveys of dietary intake, they concluded that the most likely causes were the unregulated overfortification of milk with vitamin D and/or excessive intakes of vitamin D from various foods fortified with vitamin D and natural foods containing vitamin D, including dried milk and cod liver oil.3,5 Although the Royal Academy of Physicians admitted that it did not have any direct evidence for this conclusion, it based its conclusion on the literature that reported that pregnant rodents receiving intoxicating doses of vitamin D delivered pups with altered facial features, supravalvular aortic stenosis, and hypercalcemia.6 The British Pediatric Association documented hypercalcemia but only in a relatively few infants who had approximate intakes of 1500 to 1725 IU/d of vitamin D. As a result, legislation was instituted in Great Britain forbidding the fortification of any food or any product with vitamin D. This concern for vitamin D toxicity in children led to most of the world (including countries in Europe, the Middle East, Asia, Africa, and South America) banning vitamin D fortification of milk. Only the United States, Canada, and a few European countries continued to permit milk to be fortified with vitamin D. However, in retrospect, it is likely that these infants were suffering either from

Vitamin D Is Not as Toxic as Was Once Thought – Holick May 2015         Printer Friendly PDF this page! Follow this page for updates
This page is in the following categories (# of items in each category)
Toxicity of Vitamin D 103