Results of Vitamin D RCTs with Beneficial Non-Skeletal Effects,
Those that Failed, and
Expectations for those Underway

red text and lines were added by VitaminDWiki 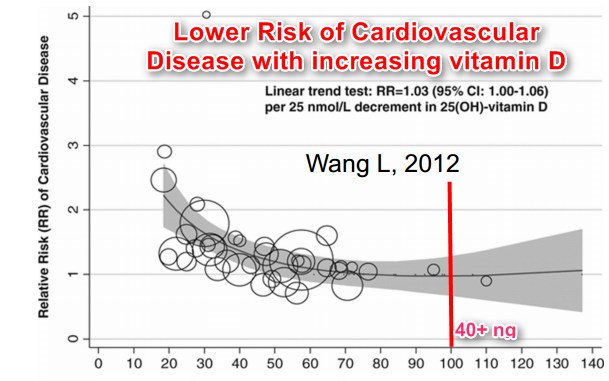 A number of recent papers have pointed out that most vitamin D randomized controlled trials (RCTs) to date have not found beneficial effects when conducted on healthy populations in Western developed countries. There could be several reasons for these general failures. One is that vitamin D may not affect risk of disease. A second is that too little vitamin D was used in the trials. A third is that serum 25-hydroxyvitamin D [25(OH)D] levels were too high to show an effect for the vitamin D doses used in the studies.

A literature search was conducted at pubmed.gov for vitamin D RCTs finding beneficial effects for non-skeletal outcomes. Studies that used combined vitamin D plus calcium were generally excluded unless there was also a calcium-only arm. In addition, data from large unsuccessful vitamin D RCTs were obtained, as well as the designs of the five major vitamin D RCTs underway on adults. 25(OH)D levels for the various studies were estimated based on 25(OH)D levels for the populations from which the participants were drawn.

The lower the 25(OH)D level of the participants and the higher the vitamin D dose, the greater likelihood of finding significant beneficial nonskeletal effects. Some of the major vitamin D RCTs underway should find significant beneficial effects for cancer, cardiovascular disease, and other nonskeletal effects, but others may not. The outcomes will depend on the baseline 25(OH)D levels of the participants and the extent to which vitamin D affects the major health outcomes such as cancer and cardiovascular disease.

The failure of vitamin D RCTs to confirm the findings of ecological and observational studies to date should not be considered evidence that vitamin D does not have beneficial effects but, rather, the result of poor design of the vitamin D RCTs.

The populations from which the participants in the successful vitamin D RCTs were drawn include African-Americans, those living in Argentina, Iran, Mongolia, and Turkey, those with COPD, diabetes mellitus, PCOS, prostate cancer, or who are obese, and those taking statins. Trial durations ranged from two months to four years. The number of participants in the trials, including those in all arms, ranged from 8 to 1179. Evidently large numbers of participants are not required for significant effects if the serum 25(OH)D levels are low enough, the vitamin D doses high enough, and the population at increased risk of the health outcomes.

One thing vitamin D RCTs cannot assess is the effect of 25(OH)D levels prior to the age of the participants. There is increasing evidence that there are important in utero effects on risk of breast cancer as an adult, for example. A classic example of the effect of early life environmental influences on cancer risk is the multicountry ecological study of diet and risk of cancer that identified animal fat and animal protein as important risk factors for cancers common in Western developed countries [Armstrong and Doll, 1975]. The results of this study were disputed for years until Harvard was able to confirm that meat was a risk factor for breast cancer in younger women [Cho, 2006]. The results of the 1975 study were largely confirmed in a more recent study [Grant, 2014]. Thus, vitamin D RCTs may have a harder time confirming ecological studies based on geographical variations of solar UVB doses than in confirming observational studies based on 25(OH)D levels.
Another caveat is that some of the associations between solar UVB doses and serum 25(OH)D levels and health outcomes may be due to UV effects of both vitamin D and other, as yet undetermined mechanisms. See the recent paper by Rebel et al. [2014], which found in a mouse model that UV irradiance had a larger impact on intestinal cancer than oral vitamin D, even though both approaches increased 25(OH)D levels the same amount.

There are five major vitamin D RCTs with adults underway. The relevant information regarding these trials is presented in Table 3. All will have at least 5000 participants, use at least 1600 IU/d in the vitamin D arm, and last for at least five years. It is not clear how many of them are measuring 25(OH)D levels of the participants at baseline. However, there are no restrictions on baseline 25(OH)D levels for participants, but there are limitations on the amount of vitamin D supplements that can be taken. In the U.S., the limitations are from the IOM Report, i.e., 600 IU/d for those under the age of 71 years, 800 IU/d for those older than 71 years. The mean baseline 25(OH)D levels for the various studies were estimated from reports in the literature for elderly people in the countries where the studies are being conducted.
The data are plotted in Figure 1. The linear regression fit to the data lies closer to the fit to the vitamin D RCTs that failed than to the ones that succeeded. However, two of the studies apparently have a significant number of participants who are expected to have baseline 25(OH)D levels below 50 nmol/L, one in Finland (FIND) and one in the U.S. for the 5000 African Americans being enrolled (VITAL). While there is uncertainty whether the trials will find beneficial effects for vitamin D supplementation for those with 25(OH)D levels above 50 nmol/L, when pooled together, the likelihood of finding significant beneficial non-skeletal effects will certainly increase.
The estimates for detecting the effect of vitamin D in reducing the risk of disease was estimated for the VITAL study [Manson, 2012]. In their Table 1, the power for the effects of vitamin D were estimated for cancer for various observed relative risks (RRs). While no estimates were provided for the expected RR, it can be estimated from existing observational study results along with estimated baseline 25(OH)D levels of the participants. From NHANES data for 2001-4, the 25(OH)D levels for whites over the age of 60 years was 63 nmol/L, while for blacks, it was 41 nmol/L [Ginde, 2009]. Assuming 25% blacks and 75% whites, the average baseline 25(OH)D level is expected to be 58 nmol/L. For 2000 IU/d vitamin D, the 25(OH)D levels for whites should increase to 103 nmol/L while for blacks, to 88 nmol/L [Garland, 2011], for a combined average of 99 nmol/L. The 25(OH)D-cancer incidence and mortality rate relations can be estimated several ways. One is to use the 25(OH)D level-incidence relations for breast and colorectal cancer [Grant, 2010]. That approach yields an odds ratio of 0.75. However, since 15% of non-skin cancer cases are due to lung and related cancers in the U.S. [Siegel, 2014], and since some of other cancers may not be vitamin D sensitive, the odds ratio changes to 0.80-0.85. A second way is to use the RR value for an increase in 25(OH)D level of 25 nmol/L found in the Health Professionals Follow-up Study was 0.84 (0.72-0.98) [Giovannucci, 2006]. That would lead to an estimate of 0.70 for a 41 nmol/L change, assuming the 25(OH)D level-colorectal cancer incidence relation and a low 25(OH)D level of 55 nmol/L. The cancer mortality rate RR was 0.69 (0.55-0.86) in that study. Thus, the range of RR for cancer incidence rates is from 0.70 to 0.85 plus the uncertainty of these values, and the range of RR for cancer mortality rates ranges from about 0.50 to 0.70 plus the uncertainty of these values. From Table 1 in Mason [2012], the power for detecting the effect of vitamin D on cancer incidence ranges from 86% to 99.9%, while that for cancer mortality ranges from 78% to 96%.
For CVD, the 25(OH)D level-CVD incidence relation is available as a meta-analysis of observational studies [Wang, 2012]. For baseline and final 25(OH)D levels of 58 and 99 nmol/L, the expected RR is 0.90. From Table 2 in [Manson, 2012], this gives a power effect of 35% for major CVD and 53% for total CVD. Most of the effect of increasing 25(OH)D levels should come from the 5000 African Americans. Based on their expected baseline and final 25(OH)D levels, the RR for CVD for African Americans should be about 0.7. Thus, it appears more likely that the VITAL study will find beneficial effects for cancer than for CVD.

References for all sections

&nbspDownload the related PDF from VitaminDWiki

Vitamin D non-skeletal trials – review June 2014         Printer Friendly PDF this page! Follow this page for updates
This page is in the following categories (# of items in each category)
Intervention 689