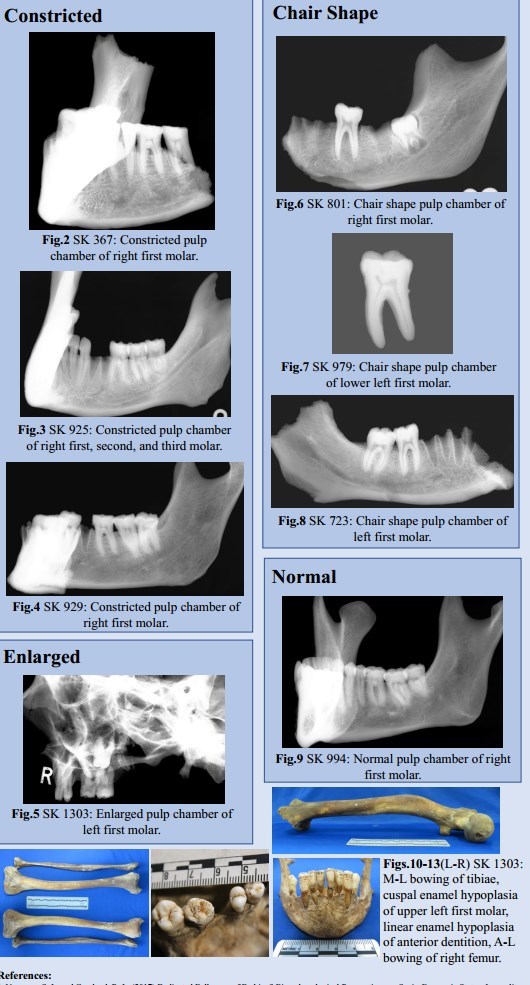 The prevalence of rickets amongst urban children dramatically increased during the 19th century in England as a result of overcrowding, pollution, and poor diet.1’2’3 However, the identification of this condition in the archaeological record is limited due to the remodelling of bone over time, the poor preservation of non-adult remains, and because clinical symptoms can occur in the absence of skeletal change.4 Bioarchaeological identification of vitamin D deficiency (childhood rickets, residual rickets in adulthood, and osteomalacia) within post-medieval burial populations therefore likely does not represent the true prevalence of vitamin D deficiency during this period.

Vitamin D deficiency impacts the absorption of minerals such as calcium and phosphate, which clinical studies have shown can lead to a range of dental abnormalities.5 Recent research has found significant differences in pulp chamber morphology in those with vitamin D deficiency, suggesting that radiographic analysis of teeth may be used as a screening tool to identify deficiency disease.6
30 adult individuals had suitable teeth and were selected for radiography (Nmale=17, Nfemale=13). All teeth were radiographed at the University of Bradford’s radiography laboratory using a Faxitron Cabinet X-ray System. The specimens were orientated as if a bitewing dental radiograph was being taken, from a lingual to buccal view in order to show the pulp chambers. All specimens were radiographed between 50-60kV for 90 seconds. The method established by D’Ortenzio et al. (2018) was followed to identify morphological changes in the pulp chamber (Fig.1).

Of the 30 individuals analysed, 28 exhibit morphological changes to the pulp chamber consistent with vitamin D deficiency. Deficiency must occur during pulp chamber formation for morphological changes to arise (1.5-2 years in males, and 1.4-2 years in females), therefore these results suggest that the vast majority of adults in this sample group experienced prolonged vitamin D deficiency ~1.5 years of age.
Two individuals exhibit change in the first, second, and third molars, indicating chronic or recurring deficiency throughout childhood. Neither exhibited skeletal evidence for vitamin D deficiency.
SK1303 exhibited an enlarged pulp chamber. Clinically, this has been linked to both vitamin D- resistant hypophosphatemic rickets and odontogenesis imperfecta.6 This individual is currently the subject of further research, as they also exhibit skeletal change consistent with residual rickets (See Figs.10-13).
The results of this study indicate that childhood vitamin D deficiency was much more prevalent within this burial population than skeletal evidence has previously suggested. The timing of deficiency recorded in the first permanent molar is consistent with the age at which rickets is most common (6-24 months). The limited evidence for residual rickets in this population suggests that either the level of deficiency required to cause alteration to the pulp chamber is less than that required to cause skeletal change, or alternatively, that the re-modelling of bone throughout life has caused the loss of skeletal evidence for deficiency in all but two individuals.

(Cached) Printer Friendly PDF this page! Follow this page for updates
This page is in the following categories (# of items in each category)
Deficiency of Vitamin D 343 Dental 77 Infant-Child 589
Edit Comments Files 2