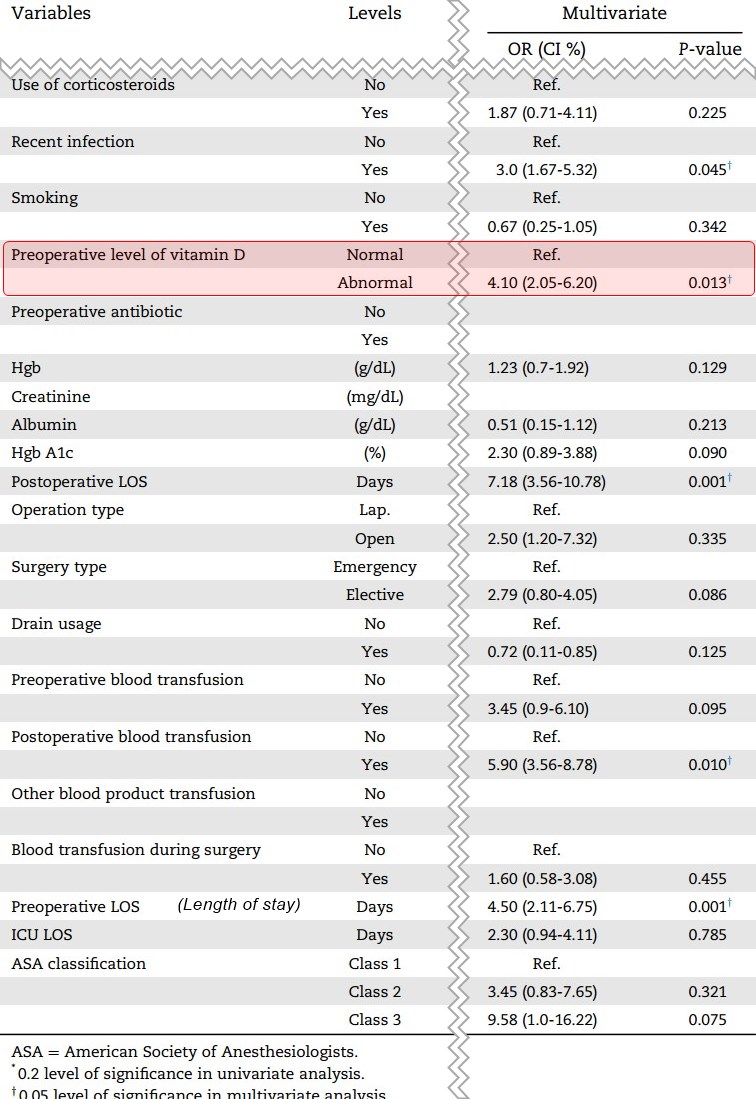 BACKGROUND:
Surgical site infection (SSI) is one of the most important and costly complications of surgical operations. Vitamin D antimicrobial and wound healing effects have been recently shown in animal models and in laboratory settings. Furthermore, potential effects of vitamin D in mitigating nosocomial infections and SSIs have been examined at a limited scale. To our knowledge, no comprehensive study has been performed to show the relationship between preoperative level of vitamin D and incidence of SSI. The present study was designed and implemented to investigate this relationship.

MATERIALS AND METHODS:
We performed a prospective cross-sectional study involving 300 adult patients who were admitted to undergo surgery in our tertiary care unit from January 2016 to January 2018. Cutoff point was considered at a level of 30 (ng/mL) in defining vitamin D deficiency. The presence of any SSI was investigated and recorded at the time of discharge and at postoperative visits up to 30 d after the surgery. Cross-tabulation and bivariate and multivariate logistic regression with unadjusted and adjusted odd ratio were used to determine the association between dependent and independent variables and to identify factors associated with SSIs.

RESULTS:
Overall, of 300 patients who were investigated, 39% had preoperative vitamin D deficiency and 11% developed SSI. In univariate logistic regressions, 20 predictors were selected to be included in the multivariate analysis. Finally preoperative level of 25-hydroxy vitamin D, history of recent infection, preoperative and postoperative hospital length of stay, and postoperative blood transfusions were confirmed as statistically significant independent predictors of SSI.

Surgical Site Infection 4X more likely if low vitamin D – Aug 2019         Printer Friendly PDF this page! Follow this page for updates
This page is in the following categories (# of items in each category)
Trauma and surgery 277