Objectives To quantify changes in vitamin D and matrix metalloproteinase-9 (MMP9) in submariners over a single long patrol and compare the data to a group of non-deploying servicemen from their base port.

Methods A prospective time-series analysis was performed. Blood samples were taken from 49 submariners deploying on patrol and 43 shore-side controls from the base port (naval officers from base or non-deploying submariners), following a winter ashore at latitude 56° north. Samples were drawn immediately before the submarine sailed, in January, and again in the final week of patrol 85 days later. Paired pre-patrol and late samples from each individual were assayed together and changes in vitamin D and MMP9 were assessed.

Conclusions This is the first study to quantify vitamin D and MMP levels in submariners. Circulating vitamin D concentrations on board were insufficient to prevent a rise in MMP. This has potential for adverse health effects and requires further study.

Note: Tthe submariners were 9 nmols lower than shore-side to start with.
Suspect that their vitamin D levels had not recovered from the previous patrols.

Seem like the following photo of the UK submariners was just an experiment, not an on-going practice 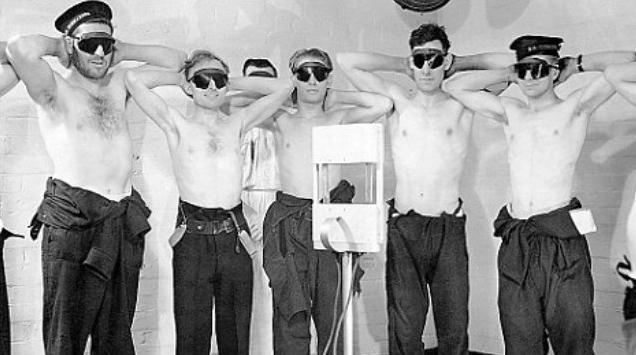