Functionally naked skin which comes in a range of colours is unique to the human species. This review summarises current evidence pertaining to the evolution of these attributes. The biggest changes in the integument occurred during the course of human evolution in equatorial Africa, under regimes of high daytime temperatures and high ultraviolet radiation (UVR). Loss of most functional body hair was accompanied by the evolution of an epidermis with a specialised stratum corneum and permanent, protective, eumelanin pigmentation. The main reason for the evolution of dark pigmentation was to protect against folate deficiency caused by elevated demands for folate in cell division, DNA repair, and melanogenesis stimulated by UVR.

Dispersal out of tropical Africa created new challenges for human physiology especially because of lower and more seasonal levels of UVR and ultraviolet B (UVB) outside of the tropics.

In these environments, the challenge of producing a vitamin D precursor in the skin from available UVB was met by natural selection acting on mutations capable of producing varying degrees of depigmentation. The range of pigmentation observed in modern humans today is, thus, the product of two opposing clines, one favoring photoprotection near the equator, the other favoring vitamin D photosynthesis nearer the poles. Recent migrations and changes in lifestyle in the last 500 years have brought many humans into UVR regimes different from those experienced by their ancestors and, accordingly, exposed them to new disease risks, including skin cancer and vitamin D deficiency.

Human skin pigmentation evolved as a compromise between the conflicting physiological demands of protection against the deleterious effects of ultraviolet radiation (UVR) and photosynthesis of UVB-dependent vitamin D(3). Living under high UVR near the equator, ancestral Homo sapiens had skin rich in protective eumelanin. Dispersals outside of the tropics were associated with positive selection for depigmentation to maximize cutaneous biosynthesis of pre-vitamin D(3) under low and highly seasonal UVB conditions. In recent centuries, migrations and high-speed transportation have brought many people into UVR regimes different from those experienced by their ancestors and, accordingly, exposed them to new disease risks. These have been increased by urbanization and changes in diet and lifestyle. Three examples-nutritional rickets, multiple sclerosis (MS) and cutaneous malignant melanoma (CMM)-are chosen to illustrate the serious health effects of mismatches between skin pigmentation and UVR. The aetiology of MS in particular provides insight into complex and contingent interactions of genetic and environmental factors necessary to trigger lethal disease states. Low UVB levels and vitamin D deficiencies produced by changes in location and lifestyle pose some of the most serious disease risks of the twenty-first century.
PDF is attached at bottom of this page

2009 map by Jablonski and Chaplin 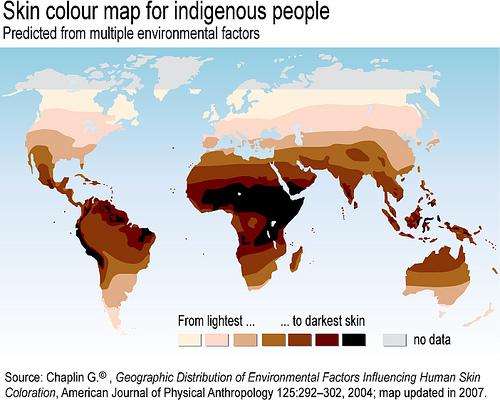 Skin color and vitamin D – Jablonski – Spring 2012         Printer Friendly PDF this page! Follow this page for updates
This page is in the following categories (# of items in each category)
Skin - Dark 441