Overview of Rickets and vitamin D contains the following summary

Rate of rickets is usually < 0.1% of births, unless dark skin or breastfed
Rate of rickets has greatly increased with the drop in vitamin D levels during the past 40 years
400 IU can prevent/treat most rickets Turkey gave vitamin D to EVERY child and eliminated Rickets
A low serum level of vitamin D does not indicate rickets
Sometimes rickets is also associated with a poor vitamin D receptor
Giving enough Vitamin D to the mother PREVENTS Rickets
Rate of rickets in some countries varies from 10% to 70% (typically poor health overall)
Rickets has been more than doubling in many countries
Rickets is strongly associated with severe breathing problems (weak ribs)
Bowed legs is not the primary indication of rickets (3 other indications of rickets are seen more often)
Vitamin D and Rickets consensus took 80 years 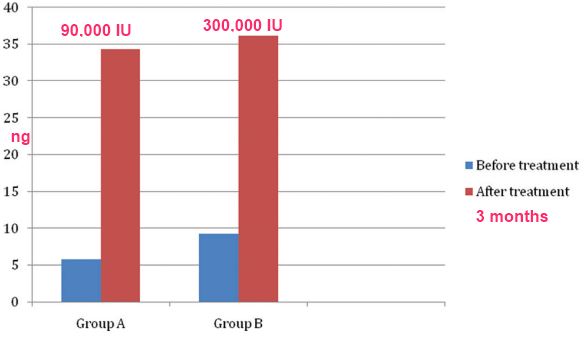 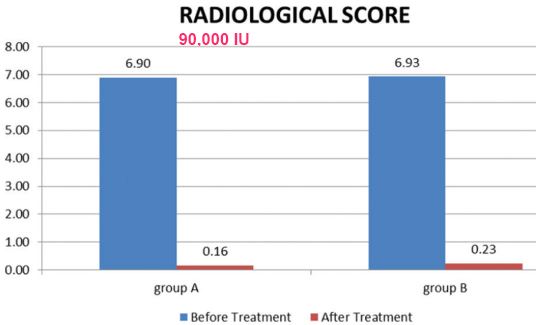 Methodology: Severity of rickets was scored on knee and wrist X-ray as per Thacher's radiographic score. Baseline serum levels of calcium, SAP, 25(OH)D, iPTH were measured. Follow up was done at 1 week, 4 weeks, and 12 weeks.

Results: Eighty-six subjects (43 in each group) completed the study. The radiographic score reduced from 6.90 to 0.16 in group A and from 6.93 to 0.23 in group B. The levels of 25(OH)D, ALP, and PTH were similar between the groups at baseline and follow up. Hypercalciuria and hypercalcemia were seen more often in group B as was hypervitaminosis D. There were no clinical adverse events.

We conducted this study to establish the safety and efficacy of a lower dose (90,000 IU) of vitamin D in healing of rickets and found results comparable to 300,000 IU in efficacy and better in safety. Treatment of rickets, as given practically, has many variations as regards to route, dose, and the duration over which it is given. The oral route is well tolerated and effective. Doses could be given as daily dose over long duration or as a single dose therapy (stoss) that are advantageous in terms of improved compliance. Various dose regimens for treatment of rickets have been used by different studies.
Stogmann et al. compared stoss regime (400,000 IU vitamin D3, given as 200,000 IU orally on day 1 and day 3) versus continuous treatment (9,600 IU vitamin D3, daily for 18 days, cumulative dose of 172,800 IU) and found no difference between the two treatment groups.[16] In another study, three different therapeutic modes (single dose of 150,000 IU intramuscular, single dose of 150,000 IU orally, and oral 5,000 IU/day for 30 days) were compared, with similar improvement in rickets.[17] Similarly, Ozkan et al. also evaluated the efficiency of three different therapeutic approaches (300,000 IU orally single dose, 300,000 IU intramuscular single dose, and 600,000 IU orally single dose of vitamin D), and found no difference in response to treatment among the groups.[18] However, the group that received 600,000 IU dose had 30% incidence of hypercalcemia. A study from Kuwait compared the efficacy of single intramuscular dose of vitamin D (600,000 IU) with that of an oral daily dose of vitamin D (2,000 IU) for 4 weeks in infants with nutritional rickets. Among those on oral therapy, 40% did not achieve radiographic healing and this was attributed to poor compliance.[19]
Cesur et al. did not find any difference among three doses of vitamin D (150,000 IU, 300,000 IU, and 600,000 IU as single oral dose) in the healing of rickets. However, hypercalcemia developed in eight infants, 2/20 who received 300,000 IU dose and 6/16 who received 600,000 IU dose.[6] Soliman et al. administered single dose of vitamin D in doses of 10,000 IU/kg intramuscular (upto a maximum of 150,000 IU) with radiographic evidence of completeee healing in 95% subjects.[9] More recently, an Indian study evaluated the non-inferiority of 300,000 IU to 600,000 IU oral vitamin D (administered as single dose) and demonstrated radiologic healing in all subjects at 12 weeks. However, hypercalcemia was seen in 1/32 and in 1/34 at 4 weeks in the groups that received the lower and higher dose, respectively.[7]
Our results demonstrated that good healing of rickets can be achieved with 90,000 IU single oral dose of vitamin D without any increased risk of hypercalcemia and hypercalciuria. Hypercalcemia was noted in similar numbers of subjects in both the groups, however, none of them were symptomatic. Hypercalcemia is more likely to occur with higher doses of vitamin D as reported by Cesur et al.l6]
The higher dose (300,000 IU) also resulted in hypervitaminosis D [S.25(OH)D >150 ng/mL] in 2/43 subjects which was not seen in the group receiving 90,000 IU dose. Hypervitaminosis D is more likely with higher doses and our results also corroborate with that.[20]
The study, conducted as part of postgraduate thesis work, had a large number of inpatients and the most common presenting manifestation was hypocalcemic seizures. Similarly, hypocalcemia had a high incidence of 72% comparable to high incidences reported by other authors.[6>7] S.25(OH)D level <20 ng/ mL was seen in the majority (86.3%) as also reported by other Indian authors.[7>21] In our study, four cases had S.25(OH)D level >30 ng/mL, however, all of them had rickets at the time of inclusion. It may be possible that they might have received vitamin D supplementation just before inclusion although we tried our best to obtain clear history ofvitamin D supplementation at the time of inclusion. It may also be possible that calcium deficiency alone may be responsible for radiological features of rickets as also ascribed to by various authors.[21-23] All of these four patients showed complete radiological healing at the end of
study. Two patients of these four belonged to group A and the rest to group B. None of these subjects developed hypercalcemia or hypercalciuria. Their initial calcium ranged from 5.4 mg/dL to 8.7 mg/dL and this increased to 9 mg/dL-9.5 mg/dL.
The radiological response to the two different doses was similar with >90% patients showing complete healing with radiographic score reduced to zero at 12 weeks. This is in conformity with the results of other authors who have observed considerable improvement though the scores may not reduce to zero in all cases.[7A21]
Mittal et al., using single dose of 300,000 IU oral in group A and 600,000 IU oral in group B, demonstrated scores <4 at 12 weeks.[7] Similarly, Aggarwal et al. also observed reduction in radiological score to <1.5 in 70% of the subjects, who received high dose vitamin D (single dose 600,000 IU, intramuscular).[21]
In seven out of eight patients (group A - 4 and group B - 4) who did not show complete healing (radiographic score more than zero), score had shown significant improvement from the baseline and had reduced to <4 in six subjects. Only one patient with initial score of 10, had shown significant decrease in score, but remained in moderate range of score of 6. This subject belonged to group B (300,000 IU). It is very much possible that if we could have followed these children further, their score could have reduced to zero as shown by Chatterjee et al.[24] They demonstrated that initial radiographic score and radiological resolution were linearly associated and the time for radiographic score to be 0 had a mean of 126 days, ranging from 20 to 180 days.
The strengths of our study include a robust design, powered to assess radiologic healing of rickets and use of a validated vitamin D formulation that was administered under direct supervision. We used age appropriate cut-offs to define hypercalciuria. Our limitations were not being able to measure S.25(OH)D level at 4 weeks when more incidence of hypervitaminosis D could have been picked up. Also, a further follow up could have been done to assess the final healing in rickets especially in subjects who did not achieve radiographic score of zero at third follow up. Our study may form the basis of further research in larger number of patients and establish new guidelines.

Printer Friendly PDF this page! Follow this page for updates
This page is in the following categories (# of items in each category)
Rickets 117 Loading dose for Vitamin D 142 Top news 808
Edit Comments Files 5