Background The presence of hypovitaminosis D in patients with autoimmune bullous skin diseases, such as pemphigus vulgaris (PV) and bullous pemphigoid (BP), is debated. In a previous study we found an increased prevalence of vertebral fractures (VFx) and hypovitaminosis D in PV and BP patients. The present study extends the sample size of the previous one, for investigating the 25-hydroxyvitamin D (25OHVitD) levels in relation with the skeletal health and disease intensity in these patients.

Methods The previous study was performed in 13 PV and 15 BP patients and 28 controls. Data from 39 additional patients (22 PV and 17 BP) were now added. Eventually, we studied 67 patients (35 PV, 32 BP, 51 females), aged 64.7???16.9? years and 67 age- gender- and body mass index-matched controls. In all subjects, serum 25OHVitD, calcium and alkaline phosphatase (ALP) levels were measured, bone mineral density (BMD) was evaluated by Dual-energy X-ray. Absorptiometry at lumbar spine (LS) and femoral neck (FN) and the presence of VFx were ascertained by visual assessment from spinal radiographs. In patients, the disease intensity was evaluated by the autoimmune bullous skin disorder intensity score (ABSIS).

Conclusions PV and BP patients have an increased prevalence of hypovitaminosis D and VFx. The extended study shows, for the first time, that the 25OHVitD levels are inversely associated with disease intensity and that VFx occur in spite of a not reduced BMD. 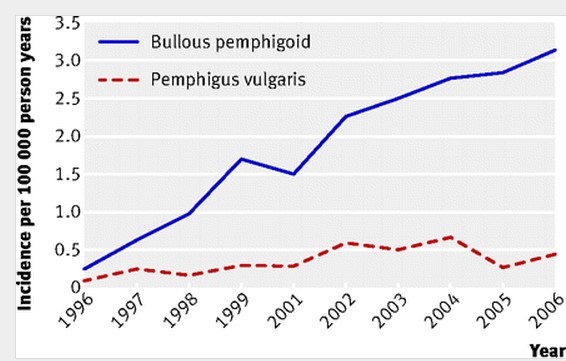 4.4X increase in a decade

Rare skin diseases (autoimmune bullous ) strongly associated with low vitamin D and is increasing – Feb 2015         Printer Friendly PDF this page! Follow this page for updates
This page is in the following categories (# of items in each category)
Skin 97