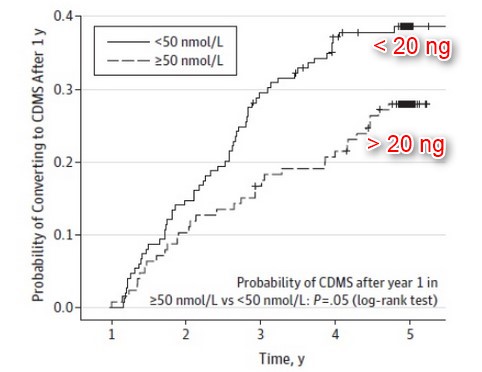 Importance It remains unclear whether vitamin D insufficiency, which is common in individuals with multiple sclerosis (MS), has an adverse effect on MS outcomes.

Objectives To determine whether serum concentrations of 25-hydroxyvitamin D (25OHD), a marker of vitamin D status, predict disease activity and prognosis in patients with a first event suggestive of MS (clinically isolated syndrome).

Design, Setting, and Participants The Betaferon/Betaseron in Newly Emerging multiple sclerosis For Initial Treatment study was a randomized trial originally designed to evaluate the impact of early vs delayed interferon beta-1b treatment in patients with clinically isolated syndrome. Serum 25(OH)D concentrations were measured at baseline and 6, 12, and 24 months. A total of 465 of the 468 patients randomized had at least 1 25(OH)D measurement, and 334 patients had them at both the 6- and 12-month (seasonally asynchronous) measurements. Patients were followed up for 5 years clinically and by magnetic resonance imaging.

Similar associations were found between 25(OH)D measured up to 12 months and MS activity or progression from months 24 to 60. In analyses using dichotomous 25(OH)D levels, values greater than or equal to 50 nmol/L (20 ng/mL) at up to 12 months predicted lower disability (Expanded Disability Status Scale score, −0.17; P = .004) during the subsequent 4 years.

Conclusions and Relevance Among patients with MS mainly treated with interferon beta-1b, low 25(OH)D levels early in the disease course are a strong risk factor for long-term MS activity and progression.

Note: The doctors did not give extra vitamin D, but just observed that those MS patients whose vitamin D levels increased by 20 ng had much better outcomes

Multiple Sclerosis patients who increased their vitamin D levels by 20 ng had better outcomes – March 2014         (Cached) Printer Friendly PDF this page! Follow this page for updates
This page is in the following categories (# of items in each category)
Multiple Sclerosis 364