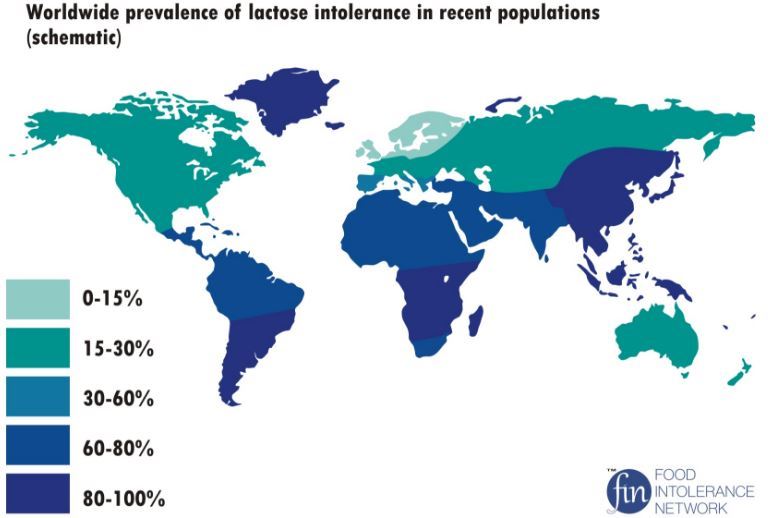 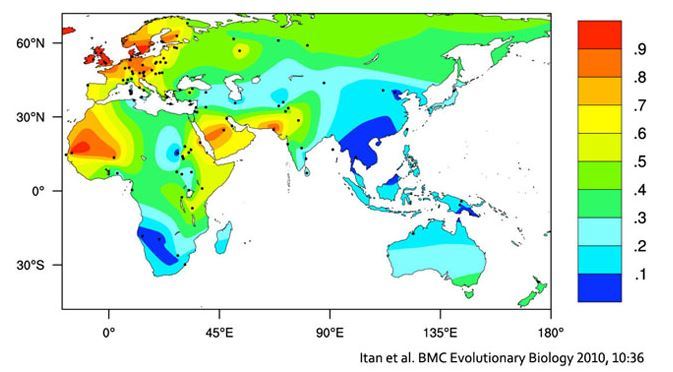 2.5 X more likely to be deficient if allergic to cow’s milk

Methods: This cross‐sectional study included 120 children aged 2 years or younger, one group with CMPA and a control group. The children were recruited at the pediatric gastroenterology, allergology, and pediatric outpatient clinics of a university hospital in the Northeast of Brazil. A questionnaire was administered to the caregiver and blood samples were collected for vitamin D quantification. Vitamin D levels <30 ng/mL were considered inadequate. Vitamin D level was expressed as mean and standard deviation, and the frequency of the degrees of sufficiency and other variables, as proportions.

Conclusions: Lower vitamin D levels were found in infants with CMPA, especially those who were exclusively or predominantly breastfed, making these infants a possible risk group for vitamin D deficiency.

Objective: The objective was to determine the prevalence of genotypes predictive of LI in different ethnic groups living in Canada and to determine whether the LCT genotype is associated with plasma 25(OH)D concentrations.

Methods: Blood samples were drawn from a total of 1495 men and women aged 20-29 y from the Toronto Nutrigenomics and Health Study for genotyping and plasma 25(OH)D analysis. Intakes of dairy were assessed by using a 196-item food frequency questionnaire. The prevalence of LCT-13910C>T genotypes was compared by using χ2 analysis. Using a Mendelian randomization approach, we examined the association between LCT genotypes and 25(OH)D concentrations.

Conclusions: In Caucasians, the CC genotype that predicts LI is associated with a lower plasma 25(OH)D concentration, which is attributable at least in part to a lower intake of dairy, particularly skim milk. Increased risk of suboptimal concentrations of vitamin D was also observed among those with the CT genotype, suggesting an intermediate effect of the heterozygous genotype.

Milk – Vitamin D deficiency 2X more likely if lactose intolerant, milk allergy, or low fat milk – 2017         Printer Friendly PDF this page! Follow this page for updates
This page is in the following categories (# of items in each category)
Fortification with Vitamin D 122