Often vets are 10 years ahead of human doctors in the use of Vitamin D
This study is for cows, but I wonder if mild acidic diet would help pregnant women too

The objectives of the experiment were to evaluate the effects of feeding diets with distinct dietary cation-anion difference (DCAD) levels and supplemented with 2 sources of vitamin D during the prepartum transition period on postpartum health and reproduction in dairy cows. The hypotheses were that feeding acidogenic diets prepartum would reduce the risk of hypocalcemia and other diseases, and the benefits of a negative DCAD treatment on health would be potentiated by supplementing calcidiol compared with cholecalciferol. Cows at 252 d of gestation were blocked by parity (28 nulliparous and 52 parous cows) and milk yield within parous cows, and randomly assigned to 1 of 4 treatments arranged as a 2 × 2 factorial, with 2 levels of DCAD, positive (+130 mEq/kg) or negative (-130 mEq/kg), and 2 sources of vitamin D, cholecalciferol or calcidiol, fed at 3 mg for each 11 kg of diet dry matter.

The resulting treatment combinations were

which were fed from 252 d of gestation to calving. After calving, cows were fed the same lactation diet supplemented with cholecalciferol at 0.70 mg for every 20 kg of dry matter. Blood was sampled 7 d before parturition, and at 2 and 7 d postpartum to evaluate cell counts and measures of neutrophil function. Postpartum clinical and subclinical diseases and reproductive responses were evaluated.

Feeding a diet with negative DCAD eliminated clinical hypocalcemia (23.1 vs. 0%) and drastically reduced the incidence and daily risk of subclinical hypocalcemia, and these effects were observed in the first 48 to 72 h after calving.
The diet with negative DCAD tended to improve the intensity of oxidative burst activity of neutrophils in all cows prepartum and increased the intensity of phagocytosis in parous cows prepartum and the proportion of neutrophils with killing activity in parous cows postpartum (58.5 vs. 67.6%).

Combining the negative DCAD diet with calcidiol reduced morbidity by at least 60% compared with any of the other treatments.
Cows with morbidity had lower blood ionized Ca and serum total Ca concentrations than healthy cows. Treatments did not affect the daily risk of hyperketonemia in the first 30 d of lactation. Despite the changes in cow health, manipulating the prepartum DCAD did not influence reproduction, but feeding calcidiol tended to increase the rate of pregnancy by 55%, which reduced the median days open by 19.

In conclusion, feeding prepartum cows with a diet containing a negative DCAD combined with 3 mg of calcidiol benefited health in early lactation. 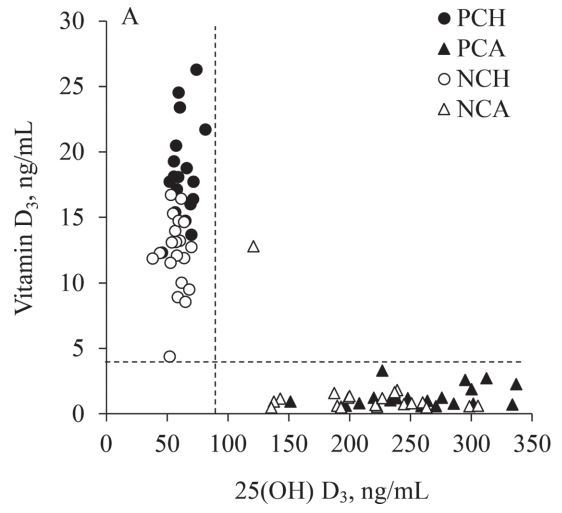 Mild acidic diet with vitamin D eliminated hypocalcemia before birth (cows) – Dec 2017         Printer Friendly PDF this page! Follow this page for updates
This page is in the following categories (# of items in each category)
Pregnancy 782 Vitamin D and Calcium 198