Magnesium, vitamin D status and mortality: results from US National Health and Nutrition Examination Survey (NHANES) 2001 to 2006 and NHANES III 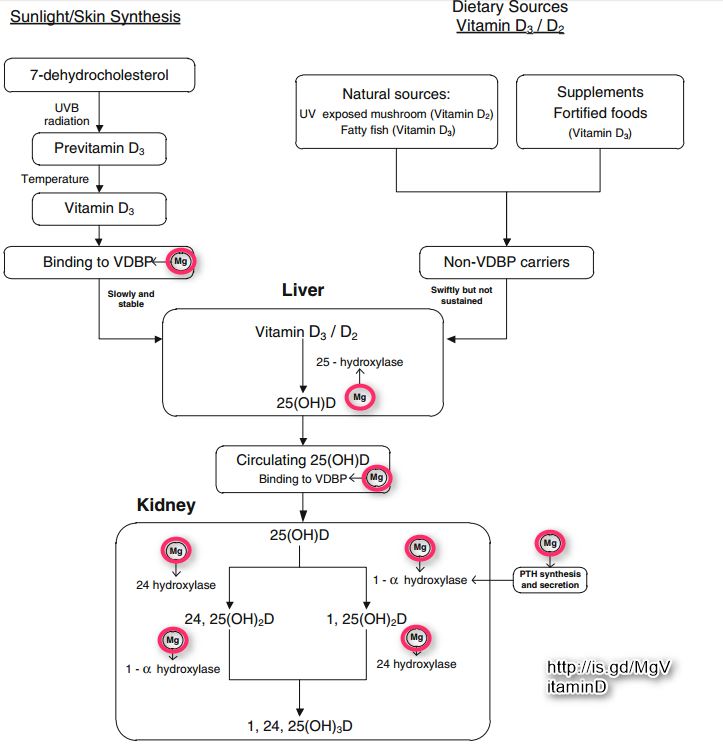 Background
Magnesium plays an essential role in the synthesis and metabolism of vitamin D and magnesium supplementation substantially reversed the resistance to vitamin D treatment in patients with magnesium-dependent vitamin-D-resistant rickets. We hypothesized that dietary magnesium alone, particularly its interaction with vitamin D intake, contributes to serum 25-hydroxyvitamin D (25(OH)D) levels, and the associations between serum 25(OH)D and risk of mortality may be modified by magnesium intake level.

Methods
We tested these novel hypotheses utilizing data from the National Health and Nutrition Examination Survey (NHANES) 2001 to 2006, a population-based cross-sectional study, and the NHANES III cohort, a population-based cohort study. Serum 25(OH)D was used to define vitamin D status. Mortality outcomes in the NHANES III cohort were determined by using probabilistic linkage with the National Death Index (NDI).


Conclusions
Our preliminary findings indicate it is possible that magnesium intake alone or its interaction with vitamin D intake may contribute to vitamin D status. The associations between serum 25(OH)D and risk of mortality may be modified by the intake level of magnesium. Future studies, including cohort studies and clinical trials, are necessary to confirm the findings.

132 studies referenced this study as of Oct 2020 Google Scholar

Pages listed in BOTH the categories Magnesium and Mortality

Magnesium decreases Vitamin D deficiency and mortality - 2013         Printer Friendly PDF this page! Follow this page for updates
This page is in the following categories (# of items in each category)
Vitamin D and Magnesium 318

Anti-aging Effect of Magnesium on Telomeres (in rats) - Mar 2014Health problems prevented by eating nuts (perhaps due to Magnesium and or Ome...Interactions between Magnesium, Vitamin D, and Calcium – April 2016Magnesium is needed by Vitamin D in 8 places - 2013Magnesium is vital to Vitamin D in 4 places (maybe 8) – March 2018Why Vitamin D is Useless without This Critical Nutrient (Magnesium) - Jan 2019