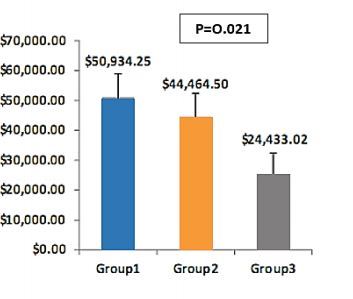 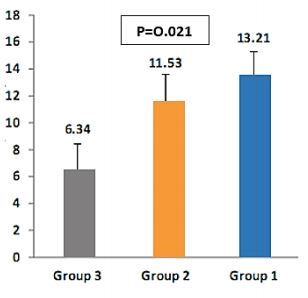 Trauma and surgery category starts with the following

Trauma and Surgery category has 266 articles

Hypothesis: We hypothesize that low vitamin D levels (a steroid hormone that activates CD4, a T-cell for immune response) and a low CD4 cell count (a T-cell and a marker of a weak immune system) account for most of these healthcare disparities seen in Hispanic and African American patients. We further hypothesize that aggressive treatment of vitamin D deficiency decreases intensive care unit (ICU) length of stay (LOS), ICU cost, and mortality rate in this patient population.

Methods: We performed a prospective study of the vitamin D status on 316 Hispanic and African American patients admitted to Grady Hospital SICU from August 2009 to September 2011. The patients were divided into 3 groups:

The injury severity score (ISS) was a mean of approximately 15 in all three groups. There wasn't ant statistical difference between the three groups in terms of injury severity. A CD4 cell count was measured in a subset of 180 patients to evaluate as a marker for potential immune system compromise or weak immune system. In our surgical intensive care unit, Hispanic and African American patients had lower vitamin D levels and CD4 counts up to 40% lower than Caucasian Americans.

Healthcare disparities have been well documented in the United States and persist despite previous medical and government interventions. The root cause of these disparities remains unclear and has eluded medical researchers for decades. It is recognized by many authorities that multiple factors contribute to healthcare disparities in the United States, such as socioeconomics (education and employment), lifestyle behaviors (physical activity, alcohol, and drug use), and access to healthcare services [1]. However, several studies have shown that these factors do not provide adequate rationale for the observed disparities. In fact, the influence of all these factors is modest and explains less than 20% of healthcare disparities [2]. Furthermore, recent reports have concluded that progress in eliminating these differences in healthcare outcomes between Caucasian Americans (CAs) and non-Caucasians remains bleak, and efforts to date have had a negligible impact on resolving this challenge.
It has become increasingly well-recognized that significant health disparities exist between AAs and CAs. According to data released by the Centers for Disease Control and Prevention, and other governmental agencies, African Americans (AA) and Hispanic Americans (HA) tend to have higher disease rates and mortality rates than Caucasian Americans (CA) [3]. Many studies are beginning to surface that suggest dietary differences are major contributors to some of these health disparities. However, which nutritional deficiencies represent the greatest risk remains a subject of intense research and debate.
Vitamin D deficiency is rampant throughout our society and is the most common nutritional deficiency in the United States population affecting over 70% of the population [4]. Common causes of vitamin-D deficiency include: poor vitamin-D content in foods (very few foods are fortified with vitamin-D); sunscreen use which blocks 95% of vitamin-D production by the skin; and melanin pigment in dark-skinned people (African-American) who need 3x1s-6xs longer sun exposure than Caucasians to produce the same amount of vitamin-D. This is because melanin serves as a natural sun screen blocking 98% of vitamin D production in dark -skinned people. Thus, the average AA/HA tend to have vitamin D levels up to 43% lower than the average WA. Other plausible causes of this vitamin D deficiency include in the elderly, aging skin which reduces vitamin-D production by 70% at age 70; obesity which causes vitamin-D to be stored in the fat cells instead of the liver in normal sized people; chronic kidney disease; lack of, or inadequate vitamin-D supplementation (current RDA too low for optimal health); and seasonal variations, latitude, and time of day [4-11]. In addition, people living above the 32nd latitude (e.g., Atlanta, Georgia) do produce vitamin-D from November - March. This is because the sunlight hits the northern hemisphere at a 45o angle, instead of the 90o angle required to produce ultraviolet band of wavelengths from 290-315 nm, which is essential for vitamin-D production in the skin from 10 am until 3 pm [4].
Humans get vitamin D from their diet, exposure to sunlight, and from dietary supplements [12]. Solar ultraviolet B radiation (wavelength, 290-315 nm) penetrates the skin to convert cholesterol to vitamin D3 [13]. Very few foods are fortified with vitamin D. Thus, limited sun exposure (15 minutes) and supplements are necessary to reach their maximal requirements [14].
We hypothesize that low vitamin D levels and a low CD4 cell count (a marker of a weak immune system) account for a large percentage of these healthcare disparities. We further hypothesize that aggressive treatment of vitamin D deficiency decreases intensive care unit (ICU) length of stay (LOS), ICU cost, and mortality rate.

We conducted a prospective study on the vitamin D status on 316 Hispanic and African American patients admitted to Grady Hospital from August 2009 to September 2011. Vitamin D levels were measured by high pressure liquid chromatography (HPLC) and tandem mass spectrometry at Quest Lab. We defined vitamin D deficiency as a level <40 ng/ml. A CD4 cell count was measured in a subset of 180 patients to evaluate as a marker for potential immune compromise or a weak immune response system.
The injury severity score (ISS) was a mean of approximately 15 in all three groups. There wasn't any clinically significant difference between the 3 groups in terms of severity of injury. Blunt trauma accounted for 70% of the injuryes in all three groups. penetrating trauma accounted for 30% in all groups.
This research was approved by Morehouse School of Medicine Institution Review Board. The patients were divided into 3 groups: Group 1 was treated with vitamin D 50,000 IU weekly, orally/nasogastric tube for up to 8 weeks or discharge for SICU (50,000-400,000 IUs of vitamin D); Group 2 was treated with vitamin D 50,000 IU orally or down their nasogastric tube daily for 5 days (250,000 IU of Vitamin D); and Group 3 (aggressive treatment) was treated with vitamin D 50,000 IU daily for 7 straight days (350,000 IU of vitamin D) we examined patient's baseline demographics which include the following: age, race, gender, and baseline biochemical markers such as vitamin B12 levels, albumin, pre-albumin, and calcium. To examine the potential impact of comorbidities, we evaluated the patients for cardiovascular disease, pneumonia, urinary tract infections, pulmonary embolus, and trauma injuries.
Our primary outcomes assessed in this study were ICU LOS and ICU cost. Secondary outcome studied was mortality rate. Statistical analysis was conducted using SPSS 16.0 software SPSS, Chicago, Illinois). Data was summarized as means plus or minus standard deviation and proportion (percentages) for continuous and qualitative data, respectively. A p-value < 0.05 was considered statistically significant.

Exclusion criteria Patients admitted to the SICU for less than 24 hours were excluded from the study. Vitamin D levels were drawn on all patients upon admissions to the SICU.

Why is vitamin D important to our general and overall health? Vitamin D is a pleiotropic seco-steroid hormone with effects throughout the body. It is hydroxylated at the 1 and 25 position to produce activated vitamin D. Vitamin D receptors have been identified on nearly all cells and tissues in the human body [4]. As Vitamin D is actually a steroid hormone, it works on the DNA in the nucleus of the cell on Vitamin D response-elements and thereby controls the expression of over 3,000 genes in the human body, including immune modulation (T-cell count and function) and inflammation (CRP, IL6, TNF, antimicrobial peptide, and free radical formation) [4,6,7].
Several studies reported that vitamin D deficiency has important health consequences due to its influence on immune function and other organ systems have begun to surface [15]. Consequently, many chronic diseases such as cardiovascular diseases (congestive heart failure, coronary artery disease, and myocardial infarctions), strokes, osteoporosis, rickets, osteopenia, rheumatoid arthritis, muscle cramps, muscle pain, joint pain, cancers (17 different types), autoimmune diseases, flu, colds, depression, type 2 diabetes, muscle weakness, and falls in elderly patients have been strongly associated with vitamin D deficiency [4,6, 7].
A meta-analysis of 18 randomized clinical trials on vitamin-D supplementation found that randomization to vitamin-D was associated with lower, all-cause mortality rates in the general population [8]. Although it is well known that the combination of vitamin-D and calcium is necessary to maintain bone density as people age [16], vitamin-D deficiency may also be an independent risk factor for falls and fractures among the elderly [17]. Another study showed that vitamin-D levels less than 17.8 ng/ml increase the risk of death 26% from all causes in the general population [8-10].
In fact, higher serum levels of 25-hydroxyvitamin D (25[OH]D) have been shown to be associated with improved health outcomes [18,19]. Based on recent meta-analyses of several observations studies of differences in serum 25(OH)D levels for AAs versus CAs, lower vitamin D level may help to explain many of the health disparities that we have observed in America, and throughout the western society. The impact of suboptimal levels of 25(OH)D on proper immune function has been elucidated by several recent investigations. As a result of lower vitamin D levels in AA/HA, there tends to be a trend towards a less responsive immune system, increased inflammation, increased oxidative stress (oxygen free radical formation), and increased endothelial dysfunction in these patient populations, which may explain most of the present healthcare disparities and chronic diseases [11].
In our previous study, we demonstrated that vitamin D deficiency was associated with increased mortality rates and length of stay in critically ill hospitalized patients admitted to the surgical intensive care unit. However, the question is what is the mechanism by which vitamin D deficiency actually causes compromise of immune function? And are there other identifiable markers which shed more light on the correlation between vitamin D deficiency and poorer health outcomes in the critical care setting? We postulate that vitamin D deficiency is associated with decrease CD4+ T-lymphocyte counts, which decreases adaptive immunity and worsens the ability of the host to overcome infectious and pro-inflammatory insults, such as, sepsis, multiple organ failure syndrome (MOFS) and adult respiratory distress syndrome (ARDS).
Limitations in our study include the loss of outpatient follow up with many of our patients once discharged from the hospital. Many patients followed up with their local medical physician or failed to keep their appointments. Also, we did not take into account the seasonal variations of vitamin D levels which are 20-30% lower in the winter months due to decreased vitamin D production.
Any discussion on healthcare reform should address correcting the most common nutritional deficiency in the United States and the world. Vitamin deficiency is associated with nearly all of the chronic diseases that drive up healthcare costs. Normalizing everybody1s serum vitamin D level > 40 ng/ ml could potentially reduce healthcare costs by $ 400 billion per year [20]. We are presently spending $ 3.0 trillion on healthcare annually. We have demonstrated in this study that higher vitamin D levels reduce hospital costs and mortality [21-29].

We conclude that a compromised immune system due to a low vitamin D status and a low CD4 cell count may explain a large percentage of healthcare disparities. Aggressive optimizing serum vitamin D status to > 40 ng/ml may be one of the most important steps in treating healthcare disparities in the United States. Further investigation into these very important biologic factors (low vitamin D levels and low CD4 cell counts) is needed to more clearly delineate these findings.

Printer Friendly PDF this page! Follow this page for updates
This page is in the following categories (# of items in each category)
Trauma and surgery 266 Cost savings with Vitamin D 137 Intervention 615 Top news 808
Edit Comments Files 3