There have been many extremely successful vitamin D intervention trials.
Often the trials are random-controlled and double-blind: neither the doctor nor the subject knows who gets it
The trials are listed in the following table are sorted by the number of days between doses of 50,000 IU.
It appears that the higher the dose of vitamin D the more diseases which are prevented or treated. 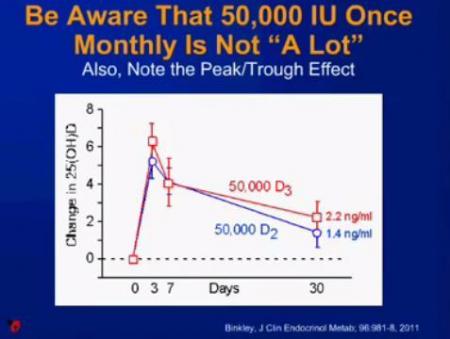 Bio-Tech Pharmacal started selling their 50,000 IU vitamin D capsules in the US in 2000.

As of March 2012, their 50,000 IU size was widely available in the US and on the internet
They also sell 5,000 IU capsules. The 5,000 IU and 50,000 IU sizes are available both over the counter and as a prescription. These are NOT new products.
It is available on the internet in via many suppliers, such as Amazon $20 for 100 capsules.
Bio-Tech has supplied products to over 40 institutions for use in clinical research, usually at no cost
The PDF attached at the bottom of this page details their US and international distributors as of Sept 2012.
The wholesale cost of 50,000 IU of D3 is about 15 cents. (D2. which doctors previously prescribed, is much more expensive and not nearly as good
Their capsules are made from beef (non-pork: Kosher/Halal approved)
Vegi capsules (without beef) are available, but are more expensive

Printer Friendly PDF this page! Follow this page for updates
This page is in the following categories (# of items in each category)
How much Vitamin D 330 Intervention 629 Top news 809
Edit Comments Files 3