The Mechanism of Action of Vitamin D in the Asthmatic Lung

Vitamin D, or 1,25-di-hydroxy-vitamin D (1,25(OH)D) in its activated form, has long been recognized as a critical mediator in bone health. New research has identified 1,25(OH)D as also vital for respiratory health. Due to its intrinsic anti-inflammatory properties, 1,25(OH)D may be very important in people with asthma. This review article seeks to evaluate the current literature to delineate the potential mechanisms of action by which 1,25(OH)D impacts asthma. We summarize the evidence that 1,25(OH)D has receptors in multiple lung cell types and acts to abrogate asthma by several mechanisms: by promoting lung immunity, by decreasing inflammation, by slowing cell cycling, by reducing hyperplasia, and by enhancing the effects of exogenous steroids. Put together, there is compelling evidence for the role of vitamin D in asthma.

Vitamin D is a crucial mediator in calcium homeostasis with a well-described role in bone formation and resorption. Vitamin D is synthesized via precursor exposure to UV light or ingested in the diet and then metabolized in the liver, kidney, and other tissues into its active form, 1,25-dihydroxy vitamin D (1,25(OH)D). In pulmonary tissues, 1,25(OH)D has been shown to be both anti-infectious and anti-inflammatory and thus may be important in the pathobiology of asthma, a disease whose exacerbations are commonly triggered by infection and whose chronicity is a result of inflammation. Recently, many studies have shown strong associations between vitamin D levels and asthma in multiple populations,1, 2 but there have been no studies that fully describe its mechanism of action in asthmatic lung tissue. Herein, we review the current knowledge regarding how 1,25(OH)D functions in the lung and, in turn, how it may impact asthma. (Figure 1) 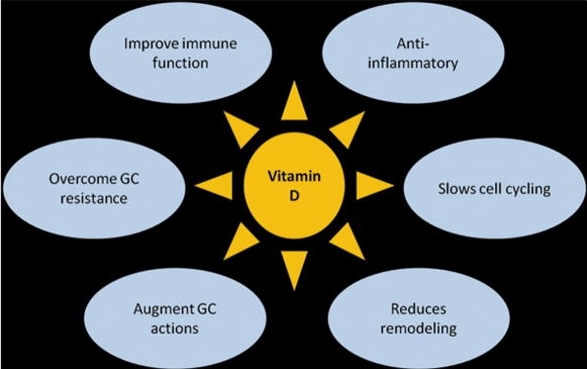 Vitamin D has a variety of effects in lung tissue; many of these are extremely relevant to asthma. As shown above, vitamin D plays critical roles in supporting the immune system, which may help prevent acute asthma exacerbations, decreasing inflammation, ...

Cells that contain vitamin D receptors (VDR) are targets for vitamin D activity. The vitamin D receptor is one of the superfamily of nuclear receptors. Upon entering the cell, vitamin D binds to the VDR, then heterodimerizes with the retinoid X receptor (RXR), and forms an active complex that translocates to the nucleus to bind with vitamin D response elements (VDRE) on the genome. VDRs are both active and functional at the cellular level in pulmonary tissue. The VDR gene is located on chromosome 12, in an area associated with both asthma diagnosis and asthma severity.3 VDRs have been localized in both respiratory epithelial cells and in bronchial smooth muscle. Pulmonary VDRs have been proven to be fully functional: 25(OH)D is converted into 1,25(OH)D in respiratory epithelial cells and both VDR and CYP24A1 (a hydroxylase that metabolizes 1,25(OH)D) synthesis are increased in bronchial smooth muscle cells, 4, 5 Eight single nucleotide polymorphism of the VDR gene have also been associated with asthma and atopy in a large population-based study,6 thus establishing a relationship between asthma and vitamin D metabolism genetics.

Cathelicidin is a peptide that is a part of the innate immune system and is regulated by 1,25(OH)D. Cathelicidin is known to be active against Mycobacterium tuberculosis, as well as against gram positive and negative bacteria, viruses, and fungi and is is secreted by respiratory epithelial cells and peripheral blood immune cells and is primarily regulated by 1,25(OH)D. Cathelicidin deficient people are more susceptible to mucosal infections.13 VDREs were identified in the promoters of both cathelicidin and defensin- β2, another prominent pulmonary anti-microbial peptide, which indicates that 1,25(OH)D stimulates transcription of genes important in pulmonary immunity.14 In fact, in another experiment, respiratory epithelial cells exposed to 1,25(OH)D exhibited increased mRNA of both cathelicidin and CD14, another anti-microbial glycoprotein involved in mucosal defense.4 Additionally, monocytes exposed to 1,25(OH)D before infection with M. tuberculosis had fewer CFUs 7 days after primary infection than controls.15 This suggests that 1,25(OH)D activates anti-mycobacterial substances through interactions with a VDRE in both respiratory epithelial cells and in peripheral blood. When immortalized lung adenocarcinoma cells were exposed to 1,25(OH)D, resultant cellular secretions were found to be inhibitory to the growth of both E. coli and Pseudomonas, which also indicates transcription and translation of antimicrobial peptides.14

Inflammation is a key component in the pathology of asthma; glucocorticoids (GC) are commonly prescribed for their anti-inflammatory properties. 1,25(OH)D has been shown to be anti-inflammatory in many tissues, including lung tissue. When airway smooth muscle cells were treated with TNF alpha and/or IFN gamma to mimic the inflammation of an acute asthmatic flare, and then exposed to increasing doses of 1,25(OH)D and GC, inflammatory cytokine production decreased in a dose-dependent manner. Both RANTES (a pro-inflammatory molecule that attracts monocytes, eosinophils, and T-cells) and IP-10 (a pro-inflammatory mediator that recruits activated T cells, NK cells, and mast cells) were noted to have significant decreases. 16 Additionally, in a mouse model of COPD, mice without VDRs (and thus, low vitamin D levels) had increased lung inflammation when compared to wildtype mice; they had more neutrophils in bronchoalveolar lavage fluid and increased release of NF-κB (a chemoattractant).17 In yet another study, airway epithelial cells were infected with RSV (respiratory syncitial virus), a common culprit of childhood lower respiratory tract infections marked by excessive inflammation of the respiratory epthelium, When the cells were pre-treated with vitamin D, there was a dose-dependent increase of the NF-κB inhibitory protein IκBα.18 If 1,25(OH)D could decrease inflammation caused by viral infections in pulmonary tissues, it could also potentially prevent the onset of acute asthma exacerbations caused by a rapid increase of inflammation.

Chronic tissue changes in asthma results from hyperplasia of smooth muscle and glandular tissue. 1,25(OH)D ameliorates this disordered growth; in airway smooth muscle cells, VDR-regulated genes that are also part of the asthmatic network include VGEF, a gene known for increasing smooth muscle hyperplasia, IL-6, a gene involved in increasing remodeling, and FN1 (fibronectin), which has been shown to be increase extracellular matrix deposition.5 Down-regulating these genes would result in decreased remodeling.

Decelerating the cell cycle can also result in more organized regeneration, as it allows cells more time to repair DNA damage. When airway smooth muscle cells that were sensitized with asthmatic serum were treated with 1,25(OH)D, fewer cells proceeded into S phase.19 In another study, airway smooth cells from normal and asthmatic donors were treated with 1,25(OH)D and then stimulated with PGDF and/or thrombin, both of which promote cellular proliferation; 1,25(OH)D again reduced proliferation by halting cells in G0/G1 phase.20 This was found to occur by decreasing hyperphosphorylation of RB and increasing phosphorylation of CK1.20

In a mouse model, in comparison to wild-type mice, VDR-knockout mice have been shown to have higher levels of pulmonary neutrophils, MMP-2, MMP-9, and MMP-12; all known to contribute to increased deposition of extracellular matrix. There was also an increase of collagen deposition in airway tissues of VDR-knockout mice.17 All of these studies show that 1,25(OH)D reduces disorganized hyperplastic regeneration in pulmonary tissue.

Steroid-resistance is a common problem in patients with asthma and can result in significant morbidity. When airway smooth muscle cells are exposed to the combination of TNF and IFN, an in-vitro condition mimicking steroid resistance, subsequent treatment with 1,25(OH)D caused a decrease in the expression of FKN, a steroid-resistance gene.16 Increasing 1,25(OH)D levels were associated with improved lung function in vivo and with improved GC-responsiveness in vitro: GC-exposed airway cells treated with 1,25(OH)D exhibited enhanced GC-regulated induction of MKP-1, an important anti-inflammatory mediator. The inability to trigger production of MKP-1 is one of the known mechanisms of steroid resistance. 1,25(OH)D helped to overcome GC-resistance by increasing its ability to be anti-inflammatory.21 1,25(OH)D, in combination with dexamethasone, increased both MPK-1 and IL-10, both important anti-inflammatory mediators primarily regulated by GC. Combining 1,25(OH)D and steroids also lowered the total dose of steroid required to increase MPK-1 and IL-10.22

Asthma is a common chronic lung disease with a few, well-defined treatment options. Given its inherent anti-inflammatory and anti-infectious properties, vitamin D has been suggested as adjunctive therapy for improved asthma control. We reviewed the current literature for the mechanisms of action of 1,25(OH)D in lung tissue and found compelling evidence for the hypothesis that vitamin D may be beneficial in patients with asthma. These studies show that 1,25(OH)D acts in lung tissues to improve immune function, reduce inflammation, decelerate cell cycling, decrease hyperplasia, and overcome steroid resistance. Put together, these studies provide ample evidence that vitamin D has the potential to decrease both acute asthma severity and also to reduce remodeling of the lung architecture. However, these results should not be thought of as definitive proof of improved clinical outcomes, but rather as a sufficient baseline knowledge to pursue randomized controlled trials of 1,25(OH)D in people with asthma.

How Vitamin D reduces asthma – 2011         Printer Friendly PDF this page! Follow this page for updates
This page is in the following categories (# of items in each category)
Breathing 403