Half as many hip fractures if take Calcium, hormones, and a tiny amount of vitamin D – July 2013

CLEVELAND, Ohio (June 26, 2013)—Should women take calcium and vitamin D supplements after menopause for bone health? Recommendations conflict, and opinions are strong. But now, an analysis from the major Women's Health Initiative (WHI) trial throws weight on the supplement side—at least for women taking hormones after menopause. The analysis was published online today in Menopause, the journal of The North American Menopause Society.

The effects translated into


These results suggest, said the authors, that women taking postmenopausal hormone therapy should also take supplemental calcium and vitamin D.
Although they couldn't specify how much, they noted that the benefits seem to increase with increasing total intake of calcium and vitamin D.
The dose will depend on keeping side effects, such as constipation from too much calcium, to a minimum, they said.

That differs from the recommendation of the US Preventive Services Task Force (USPSTF), made earlier this year.
USPSTF stated there was no basis for recommending calcium and vitamin D supplements to prevent fractures. But now, with a study this large, there may well be.
The study will be published in the February 2014 print edition of Menopause. 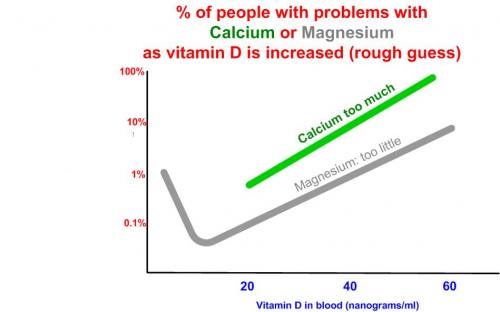 Half as many hip fractures if take Calcium, hormones, and a tiny amount of vitamin D – July 2013         Printer Friendly PDF this page! Follow this page for updates
This page is in the following categories (# of items in each category)
Falls and Fractures 225