Nutritional Deficiencies and Clinical Correlates in First-Episode Psychosis: A Systematic Review and Meta-analysis

Note: This stiuy did not look at the interaction of cognition and Omega-3

Items in BOTH the categories Cognition and Omega-3 in VitaminDWiki 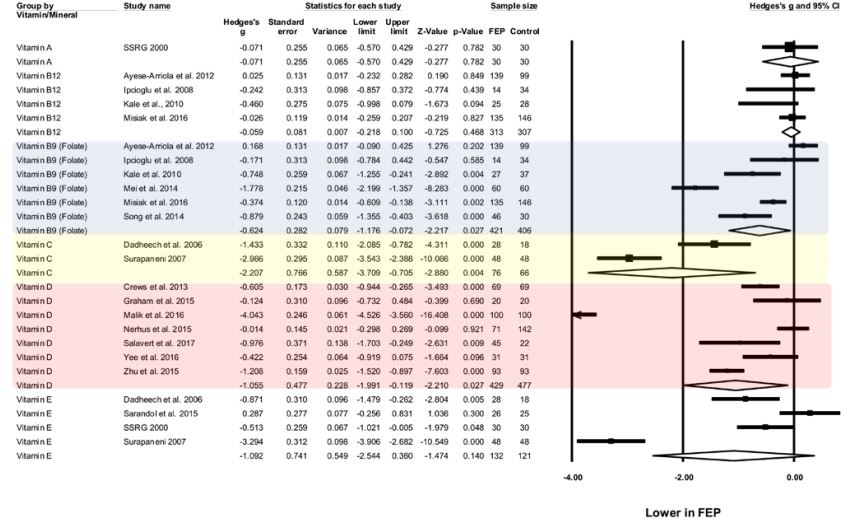 Objective
Diet is increasingly recognized as a potentially modifiable factor influencing the onset and outcomes of psychiatric disorders. Whereas, previous research has shown long-term schizophrenia is associated with various nutritional deficiencies, this meta-analysis aimed to determine the prevalence and extent of nutritional deficits in first-episode psychosis (FEP).

Conclusions
Deficits in vitamin D and folate previously observed in long-term schizophrenia appear to exist from illness onset, and are associated with worse symptomology. Further research must examine the direction and nature of these relationships (ie, mediator, moderator, or marker) with clinical status in FEP. Future trials assessing efficacy of nutrient supplementation in FEP samples should consider targeting and stratifying for baseline deficiency.

Review of study in Medscape

First-Episode Psychosis associated with low Vitamin D, Vitamin C and Folate – meta-analysis Nov 2017         Printer Friendly PDF this page! Follow this page for updates
This page is in the following categories (# of items in each category)
Cognitive 302