Inadequate vitamin D level is associated with various adverse medical outcomes. There is a growing concern that insufficient vitamin D may play a role in the development of psychiatric symptoms. This study aims to answer the question: do children with mental disorders have a higher prevalence of hypovitaminosis D? A retrospective chart review examined 25 hydroxyvitamin D (25(OH)D) levels in youth ages 7 to 17 (n=67) at two Oregon psychiatric residential facilities. Vitamin D deficiency is defined as <20 ng/ml and insufficiency as <30 ng/ml. Diagnoses were organized into six categories. 25(OH)D levels were compared across genders and diagnostic groups using a two-sample t-test and ANOVA, respectively. Statistical differences in prevalence across diagnostic categories were calculated using a Pearson chi-square test. Using the data from Saintonge’s NHANES III study on healthy US children for comparison, 21% of our cohorts were found to be vitamin D deficient and 64% insufficient, in contrast to 14% and 48%, respectively. While our results are not statistically significant, mainly because of small sample size, the overall mean 25(OH)D level in our cohort was insufficient (27.59 ± 9.35 ng/ml), compared to a sufficient mean value of 32.1 ng/ml in the general population.
No statistical significant difference was found in the prevalence across diagnostic categories.

This study found that children with psychiatric disorders might have a higher prevalence of hypovitaminosis D than the general pediatric population. 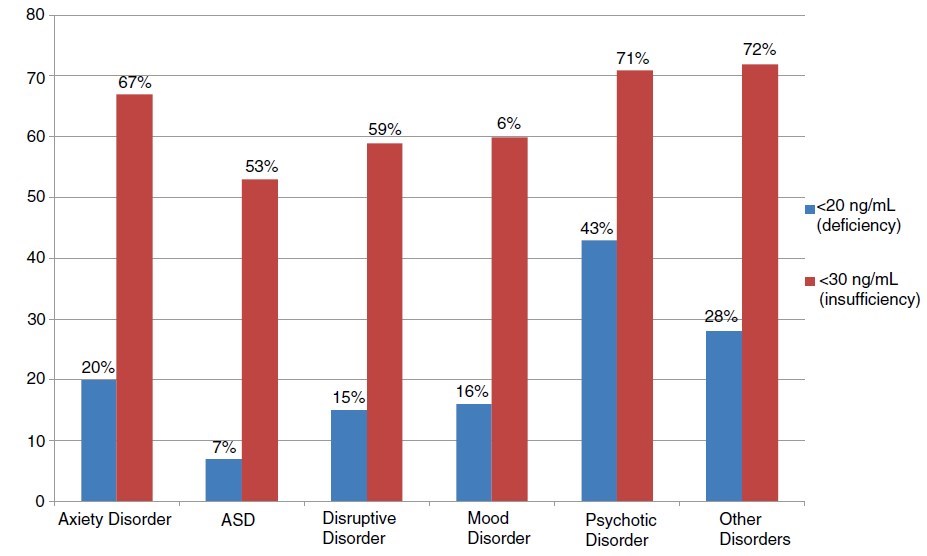 Childhood mental disorders vs levels of vitamin D – July 2013         Printer Friendly PDF this page! Follow this page for updates
This page is in the following categories (# of items in each category)
Autism 138 Infant-Child 695