>100X more likely to have "ALS Reversal" with various supplements 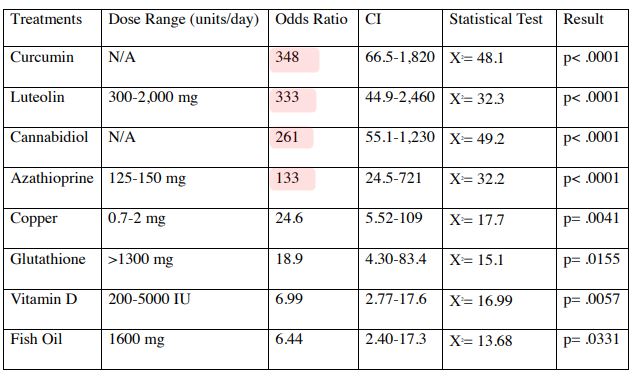 OBJECTIVE:
To identify differences in demographics, disease characteristics, treatments, and co-morbidities between patients with "amyotrophic lateral sclerosis (ALS) reversals" and those with typically progressive ALS.

METHODS:
Cases of possible ALS reversals were found in prior publications, in the Duke ALS clinic, through self-referral or referral from other Neurologists, and on the internet. Of 89 possible reversals identified, 36 cases were included because chart or literature review confirmed their diagnosis and a robust, sustained improvement in at least one objective measure. Controls were participants in the Pooled Resource Open-Access ALS Clinical Trials database and the National ALS Registry. Cases and controls were compared using descriptive statistics.

RESULTS:
ALS reversals were more likely to be male, have limb onset disease, and initially progress faster. The prevalences of myasthenia gravis (MG) and purely lower motor neuron disease in cases were higher than estimates of these prevalences in the general population. The odds of taking

were greater for cases than controls.

CONCLUSIONS:
When compared to patients with typically progressive ALS, patients with reversals differed in their demographics, disease characteristics, and treatments. While some of these patients may have had a rare antibody-mediated ALS mimicker, such as atypical myasthenia gravis, details of their exams, EMGs and family histories argue that this was unlikely. Instead, our data suggest that ALS reversals warrant evaluation for mechanisms of disease resistance and that treatments associated with multiple ALS reversals deserve further study.

ALS reduction far more likely if take Curcumin, Luteolin, CBD, Omega-3, or Vitamin D etc – April 2018         (Cached) Printer Friendly PDF this page! Follow this page for updates
This page is in the following categories (# of items in each category)
Intervention 734