Decreased Brain Levels of Vitamin B12 in Aging, Autism and Schizophrenia.

Items in both categories Vitamin B12 and Cognitive are listed here:

Items in both categories Vitamin B12 and Autism are listed here: 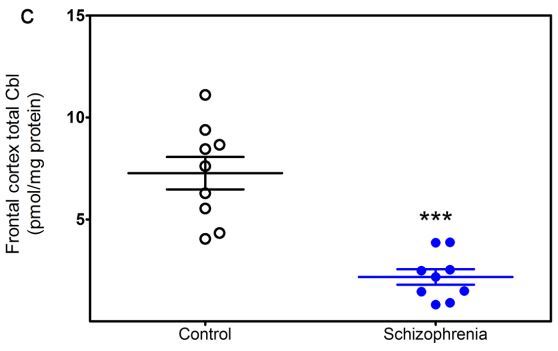 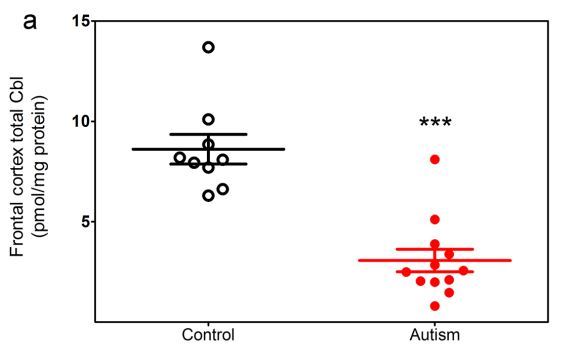 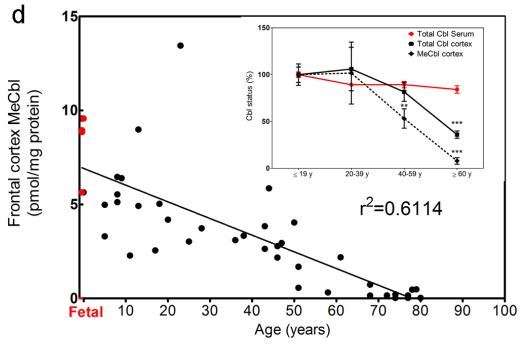 Many studies indicate a crucial role for the vitamin B12 and folate-dependent enzyme methionine synthase (MS) in brain development and function, but vitamin B12 status in the brain across the lifespan has not been previously investigated. Vitamin B12 (cobalamin, Cbl) exists in multiple forms, including methylcobalamin (MeCbl) and adenosylcobalamin (AdoCbl), serving as cofactors for MS and methylmalonylCoA mutase, respectively. We measured levels of five Cbl species in postmortem human frontal cortex of 43 control subjects, from 19 weeks of fetal development through 80 years of age, and 12 autistic and 9 schizophrenic subjects.
Total Cbl was significantly lower in older control subjects (> 60 yrs of age), primarily reflecting a >10-fold age-dependent decline in the level of MeCbl. Levels of inactive cyanocobalamin (CNCbl) were remarkably higher in fetal brain samples.
In both autistic and schizophrenic subjects MeCbl and AdoCbl levels were more than 3-fold lower than age-matched controls. In autistic subjects lower MeCbl was associated with decreased MS activity and elevated levels of its substrate homocysteine (HCY). Low levels of the antioxidant glutathione (GSH) have been linked to both autism and schizophrenia, and both total Cbl and MeCbl levels were decreased in glutamate-cysteine ligase modulatory subunit knockout (GCLM-KO) mice, which exhibit low GSH levels.
Thus our findings reveal a previously unrecognized decrease in brain vitamin B12 status across the lifespan that may reflect an adaptation to increasing antioxidant demand, while accelerated deficits due to GSH deficiency may contribute to neurodevelopmental and neuropsychiatric disorders.

Printer Friendly PDF this page! Follow this page for updates
This page is in the following categories (# of items in each category)
Autism 132 Cognitive 287 Vitamin B12 40
Edit Comments Files 4