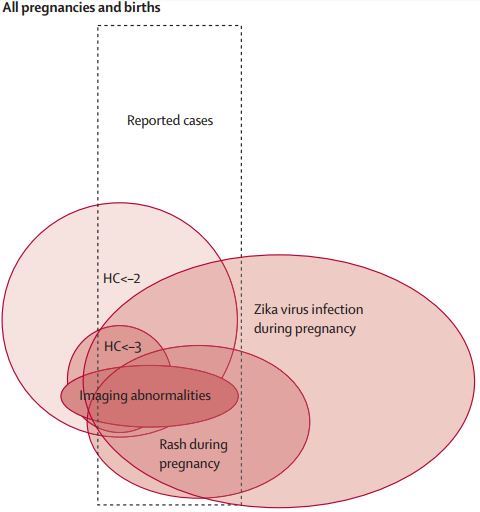 Background
In November, 2015, an epidemic of microcephaly was reported in Brazil, which was later attributed to congenital Zika virus infection. 7830 suspected cases had been reported to the Brazilian Ministry of Health by June 4, 2016, but little is known about their characteristics. We aimed to describe these newborn babies in terms of clinical findings, anthropometry, and survival.

Methods
We reviewed all 1501 liveborn infants for whom investigation by medical teams at State level had been completed as of Feb 27, 2016, and classified suspected cases into five categories based on neuroimaging and laboratory results for Zika virus and other relevant infections. Definite cases had laboratory evidence of Zika virus infection; highly probable cases presented specific neuroimaging findings, and negative laboratory results for other congenital infections; moderately probable cases had specific imaging findings but other infections could not be ruled out; somewhat probable cases had imaging findings, but these were not reported in detail by the local teams; all other newborn babies were classified as discarded cases. Head circumference by gestational age was assessed with InterGrowth standards. First week mortality and history of rash were provided by the State medical teams.

Findings
Between Nov 19, 2015, and Feb 27, 2015, investigations were completed for 1501 suspected cases reported to the Brazilian Ministry of Health, of whom 899 were discarded. Of the remainder 602 cases,

of congenital Zika virus syndrome.
Clinical, anthropometric, and survival differences were small among the four groups. Compared with these four groups, the 899 discarded cases had larger head circumferences (mean Z scores -1·54 vs -3·13, difference 1·58 [95% CI 1·45–1·72]); lower first-week mortality (14 per 1000 vs 51 per 1000; rate ratio 0·28 [95% CI 0·14–0·56]); and were less likely to have a history of rash during pregnancy (20·7% vs 61·4%, ratio 0·34 [95% CI 0·27–0·42]). Rashes in the third trimester of pregnancy were associated with brain abnormalities despite normal sized heads. One in five definite or probable cases presented head circumferences in the normal range (above -2 SD below the median of the InterGrowth standard) and for one third of definite and probable cases there was no history of a rash during pregnancy. The peak of the epidemic occurred in late November, 2015.

Interpretation
Zika virus congenital syndrome is a new teratogenic disease. Because many definite or probable cases present normal head circumference values and their mothers do not report having a rash, screening criteria must be revised in order to detect all affected newborn babies.

Printer Friendly PDF this page! Follow this page for updates
This page is in the following categories (# of items in each category)
Virus-Pregnancy 34
Edit Comments Files 2