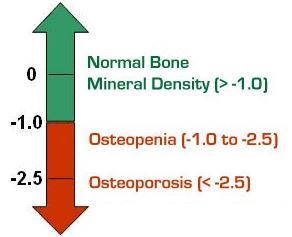 Subset of table in PDF with P-values (probability of error) < 0.01%


Objective: To find out the frequency of osteopenia and associated risk factors among young female students.

Results: A total of 100(76.9%) students were included in this study. The age range was 20-30 years. Overall,70(70%)participants were osteopenic, while 30(30%) were normal. Age<25 years, living with less exposure to sun, less physical activity and diet low in calcium and vitamin D were common risk factors.

Conclusion: The frequency of osteopenia was significantly high among young female students.

Osteopenia is a term well defined as low bone density or decreased bone density. If not prevented earlier, it can worsen to severe osteoporosis and a risk for fractures.1 The burden of osteopenia at a younger age is considerably high in Pakistan. A study conducted in Khyber Pakhtunkhwa (KPK)province of Pakistan found osteopenia among 47.7% females and osteoporosis among 24.7%.2 Additionally, supportive findings were seen in a study conducted in Karachi where 64% of women aged below 30 years and 55% of women aged below 45 years were osteopenic.3 Furthermore, another local study showed that 77.77% females aged 30-45 years were having osteopenia.4 Hence, osteopenia is a major concern among young female population, especially from Asia. Its early detection is indeed desirable among our college and university-going students. Therefore, it is significant to set up cost-effective preventive approaches, specifically at young age, to overcome the later consequences of osteoporosis. The diet enriched in adequate levels of calcium and vitamin D, cessation of smoking, living under adequate sun exposure and being physically active may delay the magnitude of osteoporosis in later life.5-6 Walking has been found a necessary and cost-effective strategy to improve bone density at any age.7 However, a few studies lay more emphasis on weight-bearing exercises to have maximum effects on bone mineral density, especially when done at younger age, though it is a known fact that peak bone mass is attained around the age of 30 years.3
The high prevalence of osteopenia and osteoporosis in Pakistan is not a novel and uncommon public health problem. An estimated data presented at 4th National Seminar on Osteoporosis revealed that out of 171.8 million subjects throughout Pakistan there would be 40.18 million (including 20.73 million women and 19.45 million men) with osteopenia and 9.91 million (including 7.19 million women and 2.71 million men) with osteoporosis. This burden is expected to rise up to 11.30 million in 2020 and 12.91 million in 2050.8 Thus, the enormity of this health problem in Pakistan is of a major concern affecting young female population with osteopenia which can later on be victim of osteoporosis and its adversities. However, Pakistan as a developing country remains ill-adapted to handle the burden of this disease due to lack of awareness of this disease, poor literacy rate and its costly rehabilitation. In the country, lack of physical activity and sedentary lifestyle of younger generation may be major contributory factors to early loss of bone mass density. Medical and allied health students being overburdened with studies do not concentrate on healthy diet and physical activity to improve their bone status. After knowing the severity of problem and becoming aware of high prevalence of osteopenia in community, allied health female students were mainly focused to see the problem at younger age. Seeking the data in younger females will provide attentiveness to arrange awareness programmes to our universities/colleges regarding risk factors of osteopenia. The current study was planned to find out the frequency of osteopenia among young female students.

This cross-sectional, observational study was conducted at the Department of Physiotherapy, Institute of Physical Medicine and Rehabilitation (IPM&R), Dow University of Health Sciences (DUHS), Karachi, from August 2011 to January 2012, and comprised young female students. Approval was obtained from the institutional review board. Allied health students of physiotherapy, prosthetics and orthotics and occupational therapy department were selected for screening. Permission was taken from the principals concerned and they were requested to provide list of students aged 20-30 years of the ongoing semester.
Questionnaire/ screening proforma was filled by all participants which contained questions regarding their age, height, weight, physical activity, menstrual status, dietary factors, including intake of calcium and vitamin D, and amount of sun exposure.
Participants who agreed to have bone mineral density (BMD, g/cm2) scan on the lumbar spine (L1-L4), left hip, and left neck of femur and left distal radius with dualenergy X-ray absorptiometry (DEXA) were included. The scan is widely used and is considered as validated, most reliable and gold standard method. The scanning and analyses were done by the same operator. DEXA (GE LUNAR PRODIGY, ENCORE 2010 software version 13.31.016) was used to measure BMD. Because all the participants could not be tested in one day, they were divided into 5 equal groups. Group list and schedule for BMD test were displayed on the notice board and handed over to the principals of the departments concerned. Principals were requested to give off for one day because the students were taken to the Ojha Campus of DUHS for BMD test. The scan was done free of cost at the radiology department of Dow Hospital, Ojha. According to the World Health Organisation's (WHO) classification, T-score of DEXA represents a person with osteopenia and osteoporosis.9
According to the WHO study group,9 BMD is normal in a young adult when reference mean BMD is within -1 standard deviation (SD); osteopenia when it is below the young adult mean BMD more than -1 SD but less than -2.5 SD; osteoporosis when it is below the young adult mean BMD -2.5 SD or more; and there is severe osteoporosis when it is below the young adult mean BMD -2.5 SD or more in addition to one or more fragility fractures.
Data was entered and analysed using SPSS 16. Frequencies with percentages were calculated for categorical variables. Fisher's exact test was conducted to see the association of outcome with different risk factors with alpha value of 0.05 and 80% power. P<0.05 was considered significant.

Osteopenia was highly prevalent among young female population. Preventive measures should be advocated at school/university level to avoid osteoporosis and its consequences later in life.
Source of Funding: The Dow University of Health Sciences provided funding for this study.

Weak bones (Osteopenia) in 93 percent of women in Pakistan attending University and wearing Islamic clothes – March 2017         Printer Friendly PDF this page! Follow this page for updates
This page is in the following categories (# of items in each category)
Bone - Health 293 Middle East 147 Women 165