BACKGROUND:
Low levels of total 25-hydroxyvitamin D are common among black Americans. Vitamin D-binding protein has not been considered in the assessment of vitamin D deficiency.

METHODS:
In the Healthy Aging in Neighborhoods of Diversity across the Life Span cohort of blacks and whites (2085 participants), we measured levels of total 25-hydroxyvitamin D, vitamin D-binding protein, and parathyroid hormone as well as bone mineral density (BMD). We genotyped study participants for two common polymorphisms in the vitamin D-binding protein gene (rs7041 and rs4588). We estimated levels of bioavailable 25-hydroxyvitamin D in homozygous participants.

CONCLUSIONS:
Community-dwelling black Americans, as compared with whites, had low levels of total 25-hydroxyvitamin D and vitamin D-binding protein, resulting in similar concentrations of estimated bioavailable 25-hydroxyvitamin D. Racial differences in the prevalence of common genetic polymorphisms provide a likely explanation for this observation. (Funded by the National Institute on Aging and others.). 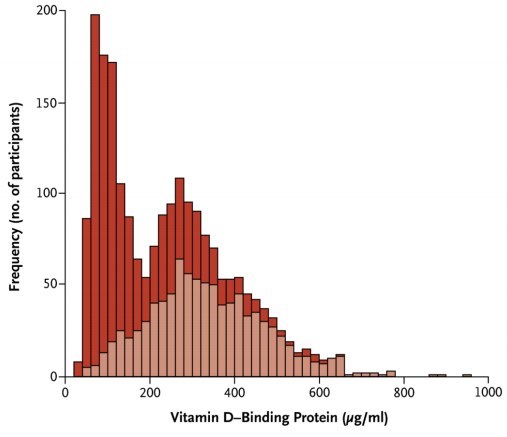 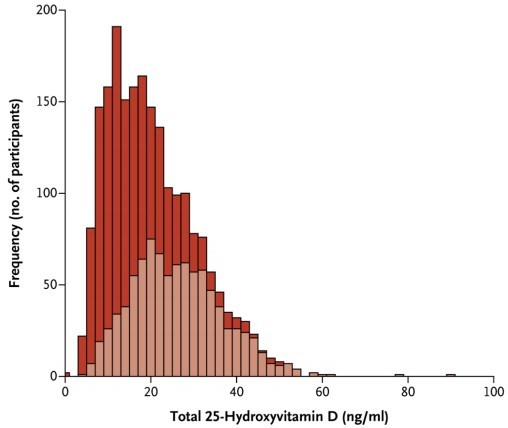 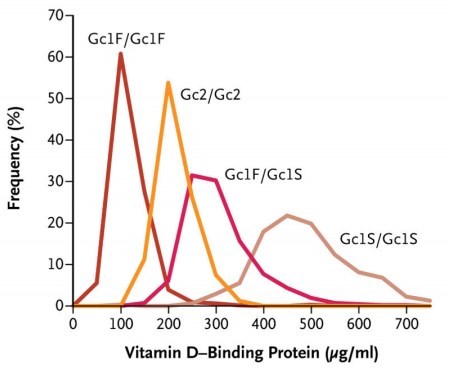 BACKGROUND: Vitamin D deficiency is associated with poor bone health and other adverse health outcomes; however, the associations are greatly attenuated in black vs white individuals. One possible explanation for this attenuation is different concentrations of bioavailable vitamin D metabolites in plasma, which are estimated with equations that include the total concentration of vitamin D binding globulin (VDBG) and haplotype-specific dissociation constants.

METHODS: We developed a method to quantify VDBG with LC-MS/MS that could also identify the haplotypes/isoforms of VDBG present. We validated the method according to recent recommendations for publications of biomarker studies. We determined serum VDBG concentrations in samples from the Atherosclerosis Risk in Communities cohort and compared the results with a widely used monoclonal immunoassay.

RESULTS: With 10 μL of serum or plasma, the lower limit of quantification for the assay (<20% CV) was 71 μg/mL. The assay was linear from 62 to 434 μg/mL, with total imprecision of 7.3–9.0% CV at approximately 250 μg/mL. Significant hemolysis interfered with quantification. The identification of isoforms was 97% concordant with genotyping (κ coefficient). Method comparison with immunoassay revealed significant isoform-specific effects in the immunoassay. Mean concentrations (SD) of VDBG by mass spectrometry were similar in whites and blacks [262 (25) vs 266 (35) μg/mL, respectively; P = 0.43].

CONCLUSIONS: Validated mass spectrometric methods for the quantification of proteins in human samples can provide additional information beyond immunoassay. Counter to prior observations by immunoassay, VDBG concentrations did not vary by race.

Vitamin D-binding protein and vitamin D status of black Americans and white Americans – Nov 2013         Printer Friendly PDF this page! Follow this page for updates
This page is in the following categories (# of items in each category)
Skin - Dark 447 Vit D Binding Protein 155