(Summary by VitaminDWiki: Camera on smartphone looks at the color of gold nanoparticle-based test strip – see last paragraph of story) 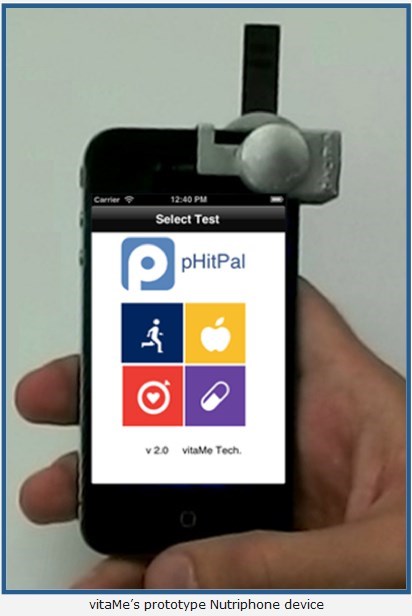 “The one area [in health sensors] that hasn’t been explored enough is chemical sensors on smarthphones,” Oncescu said. “We would like to see more of that. At some point we believe — potentially — that you’ll be able to analyze the effects of diet directly on your smartphone. You will also be able to test for cholesterol level and your vitamin levels on the smartphone — this is what we have done.”

The prototype for the Nutriphone is a smartphone accessory that attaches to the phone over its rear-facing camera. Similar to the urine analysis app, uChek from BioSense, Nutriphone enables a user’s smartphone camera to read colorimetric test strips specific to biomarkers. With the Nutriphone device, users insert a test strip into a chamber that holds it while the phone’s camera captures an image for analysis.

“We started with something very simple,” Oncescu said. “We started by monitoring pH and we found out that a lot of athletes at Cornell were interested in doing this — especially the track athletes. So we gave them test devices and some smartphones so they could test their pH level throughout their runs over a 30 to 60 minute period,” he said. “Then we were able to correlate that to sodium loss and ultimately to sweat loss.”

Oncescu and the company co-founder and CEO Matthew Mancuso did other small pilot tests with the technology, including one that quantified the amount of sweat loss over a 90 minute period doing hot yoga. VitaMe sees applications for pH testing of saliva alkalinity as it relates to diet as another potential opportunity.

“Below a certain threshold of pH you start having tooth decay and enamel decalcification,” he said. “[With a device like the Nutriphone] you could track your saliva pH throughout the day and the effect your diet has on it.”

“More recently we have moved to something we believe will ultimately change the way we go through blood based analysis — monitoring cholesterol levels. There is a lot of scientific evidence of increased mortality for cholesterol levels about 110 milligrams per deciliter. Something like 60 percent of US population has high cholesterol but not nearly enough of them are testing their cholesterol. That’s partially because the devices are very expensive but they also don’t allow really good tracking and sharing of information.”

Oncescu said based on a very small study their device appears to be as accurate as other cholesterol testing devices on the market.

The most immediate commercial application opportunity for Nutriphone, however, is in vitamin D deficiency testing, according to Oncescu.

“We have developed a gold nanoparticle-based assay that we can perform on a test strip and we have demonstrated we can do it with the accuracy of ELIZA kits,” he said.”This is something we are developing — so far we have only done it on serum samples.”

Vitamin D deficiency has been linked to a number of diseases and adverse outcomes including: osteoporosis, infections, diabetes, cardiovascular diseases, and even cancer. At present the vast majority of vitamin D testing is performed in large-scale laboratories at the request of a physician as part of an annual panel of blood tests. Here we present a system for rapid quantification of vitamin D levels on a smartphone.

The system consists of a smartphone accessory, an app, and a test strip that allows the colorimetric detection of 25-hydroxyvitamin D using a novel gold nanoparticle-based immunoassay.

We show that the system can be used to accurately measure physiological levels of 25-hydroxyvitamin D with accuracy better than 15nM and a precision of 10nM. We compare our system with well-established ELISA test kits for serum samples of unknown concentration and demonstrate equivalency of the results. We envision this as the first step towards the development of the NutriPhone, a comprehensive system for the analysis of multiple vitamins and micronutrients on a smartphone.

Protype of Feb 2013 shows the functionality 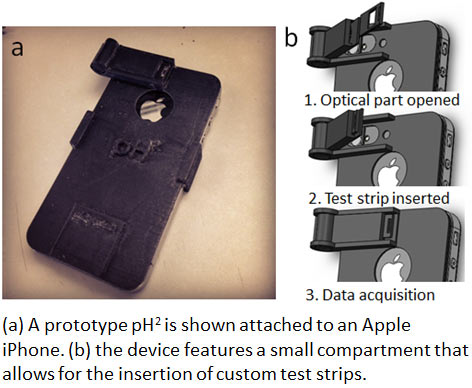 Vitamin D testing using smartphone camera: Prototype – Dec 2013         Printer Friendly PDF this page! Follow this page for updates
This page is in the following categories (# of items in each category)
Tests for Vitamin D 151