Temporal and regional variability in the request of vitamin D from general practitioners in Spain. 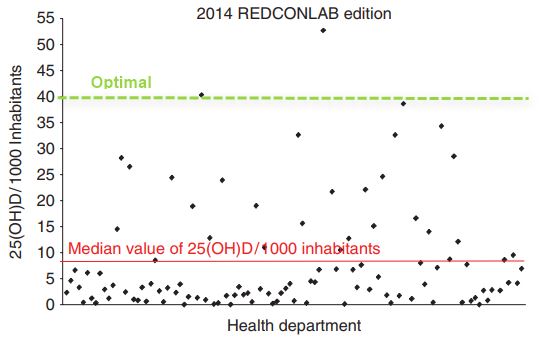 BACKGROUND:
Our main goal is to study the inter-practice regional variability and the temporal evolution in the request of 25-hydroxyvitamin D (25[OH]D) by general practitioners (GPs) in Spain.

METHODS:
Clinical laboratories in different autonomic communities (AACCs) were invited to report the number of 25(OH)D test requested by GPs during 2012 and 2014. The number of 25(OH)D requested per 1000 inhabitants and the index of variability were calculated, and compared between regions and time periods. We calculated the number of tests that could have been potentially saved in regions where 25(OH)D could be requested from primary care without restrictions taking into account the request in those where it is restricted, and the potential economical savings.

The variability index also increased from 51.7 to 68. There was a significantly variability among the different AACCs, ranging from 0.94 to 21.24 (p=0.002). 173,885 tests could have been not measured from primary care in regions without ordering restrictions, resulting in potential 886,813.5€ savings.