Vitamin D (VD) deficiency during pregnancy and early brain development is an important environmental risk factor for autism spectrum disorder (ASD). Its specific mechanism of action is still unclear. However, one study on the correlation between metabolomics and VD levels in children with ASD has found that the whole-blood arginine (Arg) levels of children with ASD are significantly negatively correlated with serum VD levels, suggesting that the effect of VD on ASD may be related to the signaling pathway involving Arg. Arg is a precursor of nitric oxide (NO), and changes in its levels most directly affect NO levels and signal transduction pathways. NO, a biologically active free radical, is both a neurotransmitter and a neuromodulator in the central nervous system and is related to the pathogeneses of various neurological diseases. The NO signaling pathway is not only affected by VD levels but also closely related to ASD through a series of mechanisms, such as neurotransmitter imbalance, immune disorders, and oxidative stress. Therefore, the effect of VD on ASD may be achieved via regulation of the NO signaling pathway. The current review discusses the relationship among VD, NO, and ASD as suggested by a large body of evidence in the literature in an effort to provide clues for researchers on the pathogenesis of ASD and the mechanism of VD's impact on ASD.
&nbspDownload the PDF from VitaminDWiki

In addition, NO can inversely regulate 1,25(OH)2D levels. CYP27B1 is a 1a hydroxylase gene whose expression is bidirectionally regulated by NO levels. The transcription of CYP27B1 can be upregulated at low concentrations of NO but inhibited by high concentrations of NO, thereby further affecting the levels of 1,25(OH)2D (81). Therefore, VD levels are closely related to NO levels, and the two influence each other.
CONCLUSIONS
VD deficiency during pregnancy and early brain development is an important environmental risk factor for ASD, and highdose VD can improve the core symptoms of ASD. The serum VD levels in children with ASD are significantly negatively correlated with the levels of the raw material for NO synthesis, Arg. NO, one of the most important signaling molecules in the brain, is involved in the occurrence of various brain- related diseases and is an important pathological molecule in ASD, Its role in ASD is mediated by a series of mechanisms, such as neurotransmitter imbalance, immune disorders, and oxidative stress. VD can regulate the levels of molecules in the NO signaling pathway. This review hypothesizes a potential mechanism in which abnormal levels of NO during the critical period of brain development caused by various factors (including abnormalities in neurotransmitters, immune disorders, etc.) are important factors in the pathogenesis of ASD, and VD affects the pathogenesis and severity of ASD by regulating NO levels. If this hypothesis is verified, monitoring NO levels during pregnancy and early brain development may become an important strategy for ASD risk prediction, and NO levels may guide the timing and dosing of VD supplementation. Researches on this pathway could contribute to detect more objective criteria for the diagnosis of ASD. The combination of VD and NO- related issues might indicate possible subtype of ASD. Eventually this may lead to more effective prevention and treatment of ASD. 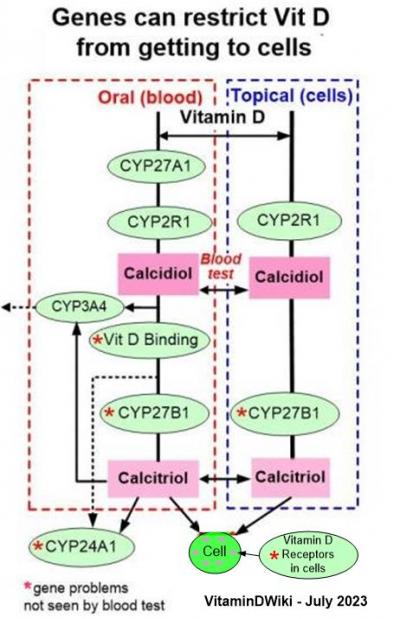 Dr. Cannell on Autism and Vitamin D in VitaminDWiki