Background:
Decades ago a flawed study estimated that no Vitamin D would be produced in the winter above latitude 37 degrees. That study lowered the UV intensity setting until no more vitamin D was produced, then calculated the latitude which was equal to that setting. The flaw was that the participants already had high enough levels of vitamin D. A much better study would have increased the UV intensity until vitamin D was produced.
Map of Vitamin D Winter - from the web 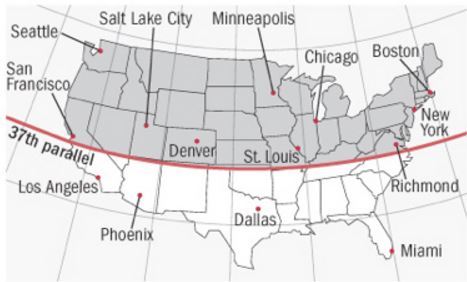 The study on this page looked at the amount of walking by German seniors
at latitude 48 degrees North (London, Calgary = 51 N)

Walking was measured for just 1 week - not for each season
Compared differences in vitamin D levels between those walking a lot vs a little
2.6 hour vs 1 hour


PDF was purchased and scanned

Possible errors in the study


However, many people feel very recharged by getting outdoors even when current belief says there is so little UV that no vitamin D should be generated

CONCLUSIONS:
Although a positive dose-response relationship was seen between walking duration and the 25(OH)D serum level for most seasons, vitamin D insufficiency was still very prevalent even in high-active persons during all seasons.
&nbspDownload the PDF from ResearchGate via VitaminDWiki

Vitamin D from the sun during Northern winters – contrary to current belief – April 2015         Printer Friendly PDF this page! Follow this page for updates
This page is in the following categories (# of items in each category)
Noontime sun and D 310 Top news 885

Half a billion people live with little vitamin D from the sun (behind paywall...Holick interview by Mercola on Vitamin D – Dec 2015Is there really a UV winterMaking vitamin D from sunshine – 2 minute cartoon video by Vitamin D Society ...The Healing Sun –1999 book highlights at VitaminDWikiUVB annual US - 1978-2014Vitamin D Myths - SUN