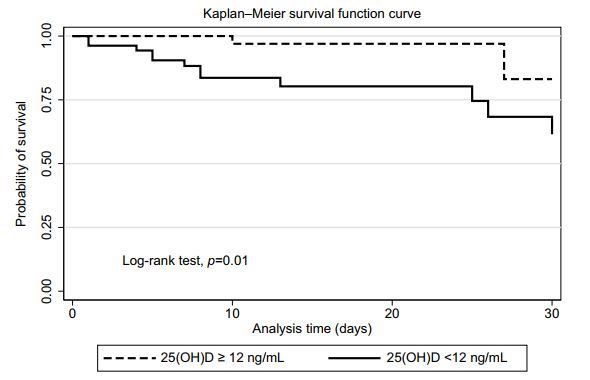 Background: Vitamin D is a steroid prohormone that regulates body calcium and phosphate metabolism. Recent studies have shown an association between low vitamin D status and high mortality in patients admitted to intensive care units. To date, there are limited data available specifically about severely septic patients in medical units.

Objectives: To determine the prevalence of vitamin D deficiency in severely septic patients and its clinical outcomes, including mortality rate.

Methods: A prospective observational study was conducted to investigate the prevalence of vitamin D deficiency and its association with 30-day mortality in patients with severe sepsis. Patients admitted to medical wards at our hospital between November 2014 and March 2015 were included in the study. A 25-hydroxyvitamin D level <20 ng/mL was defined as vitamin D deficiency, and <12 ng/mL as severe deficiency. For an association analysis, the patients were grouped into deficient versus not deficient and severely deficient versus not severely deficient.

Vitamin D deficiency with severe sepsis increased risk of dying by 7.7 X – Nov 2017         Printer Friendly PDF this page! Follow this page for updates
This page is in the following categories (# of items in each category)
Trauma and surgery 278 Inflammation 135