Vitamin D plays an important role in bone growth and maintenance because it helps the body absorb calcium and phosphorus.12 In children, low levels of vitamin D can cause rickets, a condition characterized by soft bones and skeletal deformities. In adults, low levels of vitamin D can lead to osteoporosis (decreased bone mass), which also increases the risk of fractures. Some research suggests that adequate vitamin D may have benefits, such as lowering the risk of breast and colorectal cancer3,4, cardiovascular disease in men5, and multiple sclerosis.6 However, the research supporting the benefits of vitamin D, other than for bone health, is still inconclusive.7

The CHMS collected blood samples from Canadians that measured the plasma 25-hydroxyvitamin D [25(OH)D] concentrations in nanomoles per litre (nmol/L) that reflect the number of molecules per litre of blood. The concentration of 25(OH)D reflects vitamin D levels in the blood from food, supplements, and sun exposure.7

What does this mean for bone health?

The following categories describe the amount of vitamin D in the blood relative to bone health, as suggested by the Institute of Medicine (IOM).
The categories were developed through a comprehensive review of scientific studies.7

Just over two-thirds of Canadians (68%) had vitamin D blood levels above the cut-off, according to Cycle 2 data from the CHMS (Chart 1). Conversely, about one third (32%) had concentrations of vitamin D below the cut-off, this rate also includes those who were vitamin D deficient- - 10%14 of Canadians were deficient.

The percentage of Canadians above the vitamin D cut-off across all age groups resembles a U-shape—highest among young children and seniors and lowest for ages 20 to 39 (Chart 1). The youngest children (aged 3 to 5) had the highest rates above the cut-off (89%), while the 20- to 39-year-olds had the lowest (59%).
Beyond examining a single cut-off, variations in average blood levels by age and sex provide more information about who is getting enough vitamin D.

The youngest and oldest age groups had levels of vitamin D that were notably higher than the national average of 64 nmol/L. The average level of vitamin D for 3- to 5-year olds was 74 nmol/L, while the average was 67 nmol/L for those aged 6 to 11, and 70 nmol/L for 60- to 79-year-olds.

Overall, the average blood level for females (67 nmol/L) was higher than males (61 nmol/L). The largest sex differences were seen among children aged 6 to 11 and adults aged 20 to 39. Among children aged 6 to 11, males had higher average blood levels of vitamin D (72 nmol/L) than females (63 nmol/L). This was the only age group where males had higher levels than females. The average vitamin D blood level for males aged 20 to 39 was 55 nmol/L, while it was 66 nmol/L for females—a sex difference of 11 nmol/L.

Chart 1 Percentage of Canadians > and < 50nmol/L, by age group 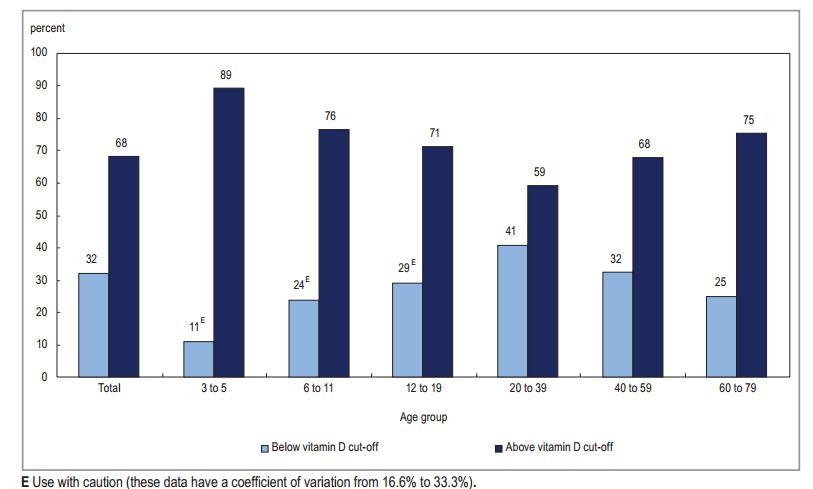 What else may be linked with higher blood levels of vitamin D?

The age and sex differences in blood levels of vitamin D may, to some extent, be related to how people in these groups obtain their vitamin D. For example, people can obtain vitamin D naturally from a few foods, including egg yolks and fatty fish such as mackerel or salmon.

The focus of the remainder of the article will be on other sources of vitamin D. Specifically, attention will be given to supplement use, milk consumption and sun exposure- - and how they may be related to vitamin D blood levels. A possible link between body mass index (BMI) and vitamin D is also explored.

According to CHMS Cycle 2 data, 34% of Canadians took a supplement containing vitamin D within the month before they were surveyed. Supplements include any prescription or over-the-counter medication, herbal product, botantical oil, vitamin or mineral that contain vitamin D. More females (41%) took supplements than males (28%). In terms of age, supplement intake was highest among 3- to 5-year-olds and 40- to 79-year-olds; and lowest among those aged 12 to 39.

Overall, a higher percentage of Canadians who took supplements containing vitamin D had blood concentrations above the cut-off (85%) compared to those who did not take supplements with vitamin D (59%).

Among supplement users, young children aged 3 to 5 (97%) and older Canadians aged 60 to 79 (93%), had the highest rates above the cutoff compared with the national average (85%). Of any age group taking supplements, 20- to 39-year-olds had the smallest percentage above the cut-off at 75%.

Osteoporosis is a disease leading to a loss of bone mass accompanied by increased risk of bone fragility and fracture.9 The condition primarily affects older people, mainly women.

Past research10 shows that 19% of women and 3% of men over 50 reported being diagnosed with osteoporosis by a health professional. Rates were higher with age—of those 71 or older, 31% of women and 6% of men had been diagnosed.

Adding vitamin D to cow's milk and margarine is mandatory in Canada as a preventative measure against rickets, osteomalacia, and osteoporosis.11 It is also added to some foods such as: goat's milk, fortified plant-based beverages (such as fortified soy beverages), and calcium-fortified orange juice.1

According to Cycle 2 of the CHMS, 75% of those who consumed milk once or more a day had levels of vitamin D above the cut-off, compared with 60% of those who had milk less than once a day.

Vitamin D is unique because it can be made by the body through exposure to sunlight while most vitamins need to be ingested. That is why it is commonly known as the 'sunshine vitamin.’

The body's ability to produce vitamin D is affected by factors such as latitude (distance from the sun), season, time of day, cloud cover, smog, clothing coverage, and sunscreen use. Skin pigmentation is also linked to vitamin D levels. Melanin in the skin evolved as an effective natural sunscreen. Those with darker skin pigment, or more melanin, have more difficulty producing vitamin D from the sun.2

The body's ability to produce vitamin D from the sun also declines with age. For example, a person aged 70 makes, on average, 25% of the vitamin D that a 20-year-old makes when exposed to the same amount of sunlight.2 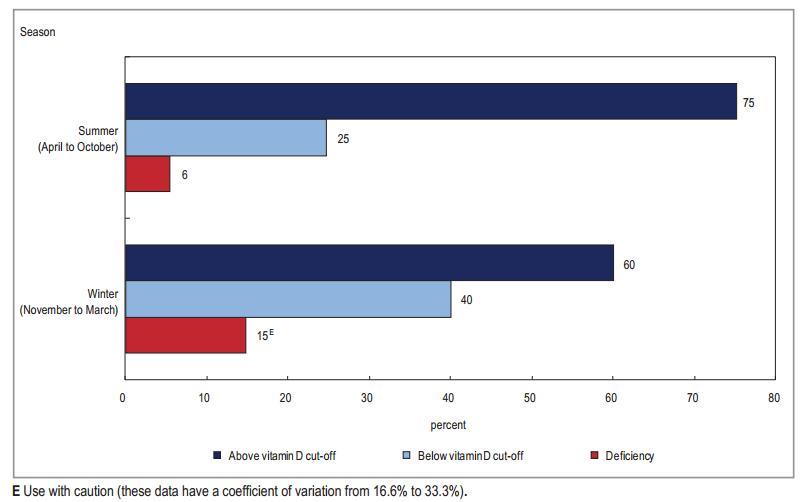 Geography is also a factor—during the winter months in Canada and other countries in the northern hemisphere, there are fewer ultraviolet B (UVB) photons reaching the earth. This means that very little, if any, vitamin D is produced by the body in the winter.2 According to CHMS Cycle 2 data, 40% of Canadians had concentrations of vitamin D below the cutoff in winter, compared with 25% in summer
(Chart 3).

Similar to previous research,12 Cycle 2 of the CHMS suggests a link between body mass index (BMI) and vitamin D. Children and adults who were overweight or obese generally had lower average vitamin D blood levels than those who were normal or underweight.

Body mass index (BMI) is the ratio of a person's weight, in kilograms, by their height in meters squared (kg/m2). It is useful for classifying body weight and identifying obesity. Adult BMI ranges are different than those for children and adolescents to account for growth-rate variations among youth.13

Vitamin D blood levels for obese adults were significantly lower than overweight and normal/underweight adults (Chart 4). However, there were no notable differences between the overweight and normal/ underweight adults. One exception was found in the 18 to 39 age group. For this age group, there were no significant differences in average vitamin D blood levels across any of the three BMI categories.

According to measurements taken during Cycle 2 of the CHMS from 2009 to 2011, most Canadians had levels of vitamin D at or above 50 nmol/L, a level sufficient for healthy bones for most people. In particular, children aged 3 to 11, and seniors aged 60 to 79 had blood concentrations of vitamin D higher than the national average. Furthermore, despite a reduced likelihood of vitamin D production year-round, Canadians generally had levels of vitamin D in their blood above the cut-off.

Teresa Janz and Caryn Pearson are analysts with the Health Statistics Division.

Vitamin D blood levels of Canadians – Jan 2013         Printer Friendly PDF this page! Follow this page for updates
This page is in the following categories (# of items in each category)
Vitamin D in Canada 49

Alaskan Resolutions to increase vitamin DCanadian Paediatric Society – vitamin D recommendations unchanged since 2007 ...Northern Canadians do not have low vitamin D levels (are they taking suppleme...Sun is needed, but as with ice cream, getting too much can cause problems – A...