Vitamin D and skin repair: a prospective, double-blind and placebo controlled study in the healing of leg ulcers.

METHODS:
We selected 26 patients with leg ulcers, and 26 control patients without ulcers, matched for gender, age, systemic arterial hypertension and tobacco use. The venous ulcer group was divided in two subgroups: one that received placebo (nine patients) and other receiving vitamin D, 50.000 IU per week over two months (13 patients). Blood was collected for 25 OH vitamin D dosage before and after the medication. In the ulcer group, we obtained data concerning demographics, leg ulcer size, as well as pain severity, measured by an analogical visual scale. Data was grouped in contingency and frequency tables, the tests of Fisher and chi-squared being used for nominal variables and Mann-Whitney for numerical variables. The adopted significance was of 5%.

RESULTS:
We found vitamin D insufficiency in the great majority of the patients.
The median level in the ulcer group was 17.05 ng/dl and 22.75 ng/dl in the group without ulcer (p=0,0182)
No relation was found between the ulcer size without treatment and the level of vitamin D.

After treatment, the average size of the ulcer changed from

Considering the variability of the size of the ulcer in the treatment group versus placebo group, the average size was equal to -0,75 cm² in the first group and +4cm² in the second (p=0,0676)

Decrease in size was computed by VitaminDWiki from the above abstract

The results of this small study were not statistically significant, but very interesting.

Suspect that had the vitamin D deficiency been previously treated that there would have been fewer leg ulcers.
Suspect that many of the leg ulcers were those of diabetics - who typically have a low level of vitamin D 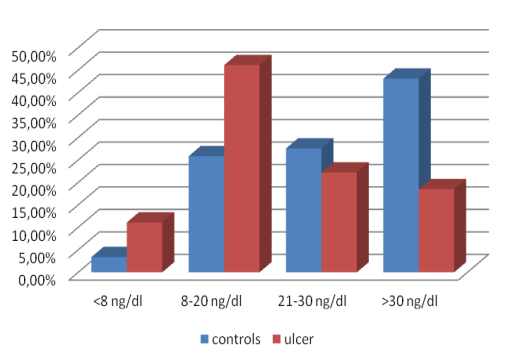 The authors speculate that this can be due to the fact that patients with venous ulcers were told to stay at home as part of treatment.
They also use more clothes in order to avoid the unpleasant odor and bad aesthetic appearance of the wounds, factors that can promote deficiency by decreasing the synthesis of epidermal action of ultra violet rays.

PDF (in English) is attached at the bottom of this page

Short URL for this page = http://is.gd/ulcersd