This article provides a detailed review of current knowledge on the role of vitamin D and its receptor in the biology and management of uterine fibroids (UFs). Authors present ideas for future steps in this area. A literature search was conducted in PubMed using the following key words: “uterine fibroid” and “vitamin D”. The results of the available studies, published in English from January 2002 up to April 2018, have been discussed. Vitamin D is a group of steroid compounds with a powerful impact on many parts of the human body. This vitamin is believed to regulate cell proliferation and differentiation, inhibit angiogenesis, and stimulate apoptosis.
Nowadays, hypovitaminosis D is believed to be a major risk factor in the development of UFs. In many studies vitamin D appears to be a powerful factor against UFs, resulting in inhibition of tumor cell division and a significant reduction in its size, however, the exact role of this compound and its receptor in the pathophysiology of UFs is not fully understood. According to available studies, vitamin D and its analogs seem to be promising, effective, and low-cost compounds in the management of UFs and their clinical symptoms, and the anti-tumor activities of vitamin D play an important role in UF biology. The synergy between vitamin D and selected anti-UF drugs is a very interesting issue which requires further research. Further studies about the biological effect of vitamin D on UF biology are essential. Vitamin D preparations (alone or as a co-drugs) could become new tools in the fight with UFs, with the additional beneficial pleiotropic effect.
&nbspDownload the PDF from VitaminDWiki

The aim of this study was to evaluate the effect of vitamin D supplementation in women with hypovitaminosis D and “small burden” uterine fibroids.

This study focused on 208 women diagnosed with uterine fibroids and concomitant hypovitaminosis D, from January to December 2014. One hundred eight women of the initial study population were diagnosed with “small burden” uterine fibroids. Among them, those who underwent a proper vitamin D supplementation constituted the “study group” (n = 53), while women who spontaneously refused the therapy or did not perform it properly, constituted the “control group” (n = 55). The characteristics of uterine fibroids, the fibroid-related symptoms, and the vitamin D serum levels were evaluated 12 months after the initial diagnosis.

Supplementation therapy with 25-OH-D3 restores normal vitamin D serum levels in women with “small burden” fibroids. In these women, vitamin D supplementation seems to reduce the progression to an extensive disease, and thus the need of conventional surgical or medical therapy.
&nbspDownload the PDF from VitaminDWiki
- - - - - - - -
All women with UF and < 30 ng of vitamin D were given 50,000 IU of cholecalciferol (oral solution) once per week for 8 weeks, followed by maintenance therapy of 2,000 IU daily for a year.

Vitamin d and the risk of uterine fibroids - 2013

BACKGROUND: : Uterine leiomyomata (also known as fibroids) are benign tumors of uterine smooth muscle that are characterized by overproduction of extracellular matrix. Fibroids are the leading indication for hysterectomy in the United States. The active metabolite of vitamin D has been shown to inhibit cell proliferation and extracellular matrix production in fibroid tissue culture and to reduce fibroid volume in the Eker rat. No previous study has examined whether vitamin D is related to fibroid status in women.

RESULTS: : Only 10% of blacks and 50% of whites had levels of 25(OH)D regarded as sufficient (>20 ng/ml). Women with sufficient vitamin D had an estimated 32% lower odds of fibroids compared with those with vitamin D insufficiency (adjusted odds ratio [aOR] = 0.68, 95% confidence interval [CI] = 0.48-0.96).
The association was similar for blacks and whites.
Self-reported sun exposure ≥1 hour per day (weather permitting) was also associated with reduced

CONCLUSIONS: : The consistency of findings for questionnaire and biomarker data, the similar patterns seen in blacks and whites, and the biological plausibility provide evidence that sufficient vitamin D is associated with a reduced risk of uterine fibroids.

Women who had sufficient amounts of vitamin D were 32 percent less likely to develop fibroids than women with insufficient vitamin D, according to a study from researchers at the National Institutes of Health.

CONTEXT: Recent in vitro and in vivo experimental evidence supports a role of vitamin D insufficiency as an important factor in the development of uterine leiomyomas.
However, epidemiological data supporting this possibility are scanty.

OBJECTIVE: Our objective was to investigate vitamin D status in women with and without uterine leiomyomas.

DESIGN: This was a case-control study of women referring to 2 infertility units in Italy. Women were eligible as cases if they were diagnosed with at least 1 uterine leiomyoma with a mean diameter ≥10 mm at transvaginal ultrasound. Each of them was matched to the 2 subsequent women of the same age (±1 year) whose uterus resulted unremarkable at ultrasound. Selected women provided a blood sample for the quantitative detection of 25-hydroxyvitamin D₃ levels.

CONCLUSIONS: Vitamin D is an emerging regulator of uterine leiomyoma development. Cohort and interventional studies are pressingly needed to confirm a causal relationship and to investigate the potential therapeutic benefits of vitamin D supplementation.

Racial and ethnic differences in the pathogenesis and clinical manifestations of uterine leiomyoma. (Sept 2013)

Uterine leiomyomas are the most common benign gynecologic condition. The prevalence is three times more common among women of African ethnicity. Disparity in this disease is evidenced by earlier age of onset, greater severity of symptoms, and different response to treatment. Although the pathogenesis of disease development is not completely known, growing evidence focuses on investigating the molecular mechanisms in disease development and the influence of ethnicity. Variation in the expression levels or function of estrogen and progesterone receptors, polymorphism of genes involved in estrogen synthesis and/or metabolism (COMT, CYP17), retinoic acid nuclear receptors (retinoid acid receptor-α, retinoid X receptor-α), and aberrant expression of micro-RNAs (miRNAs) are some of the molecular mechanisms that may be involved. Nutritional factors, such as vitamin D deficiency, might also contribute to the higher incidence in dark skinned populations who are also commonly suffer from hypovitaminosis D. Culture and environmental difference might have a role in disease development. Further analysis and better understanding of these mechanisms will provide insight into the molecular basis of racial disparities in leiomyoma formation and will help to develop new innovations in leiomyoma treatment.

PURPOSE:
Currently there is no effective medicinal treatment for uterine fibroids (UFs), a common health disorder that affects women of reproductive age. Identification of modifiable risk factors such as vitamin D (Vit D) deficiency could help develop novel strategies for the prevention and/or treatment of UFs. The purpose of this study was to identify whether low serum Vit D3 levels correlate with increased risk of UFs.
METHODS:
A total of 154 premenopausal women were recruited for this cross-sectional study. The control group comprised 50 subjects with a normal, fibroid-free uterine structure, confirmed by transvaginal ultrasonography. The 104 case subjects had at least one fibroid lesion that was 2 cm(3) in volume or larger, confirmed by transvaginal ultrasonography. For each case subject, total uterine volume and total volume of all existing fibroids were measured in three perpendicular planes, with volume determined according to the prolate ellipse formula (a × b × c × 0.523), where a is height, b is width, and c is depth. Serum Vit D 25(OH) D3 levels were measured by radioimmunoassay. The independent t-test was used to compare serum Vit D levels across groups. Correlations were assessed by Spearman's rank correlation test.
RESULTS:
Lower serum 25-(OH) Vit D levels were significantly associated with the occurrence of UFs (P = 0.01). A statistically significant inverse correlation was also observed between serum 25-(OH) Vit D levels and total UF volume (r = -0.31; P = 0.002) within the case cohort. Subjects with larger fibroid volumes had lower serum Vit D levels and vice versa. Data stratified for ethnicity showed a statistically significant inverse correlation between serum 25-(OH) Vit D levels and total fibroid volume in black subjects (r = -0.42; P = 0.001). An inverse correlation was also evident in white subjects (r = -0.86; P = 0.58) but this did not reach statistical significance.
CONCLUSION:
Lower serum Vit D levels are inversely correlated with UF burden in different ethnic groups. Vit D deficiency is a possible risk factor for the occurrence of UFs. 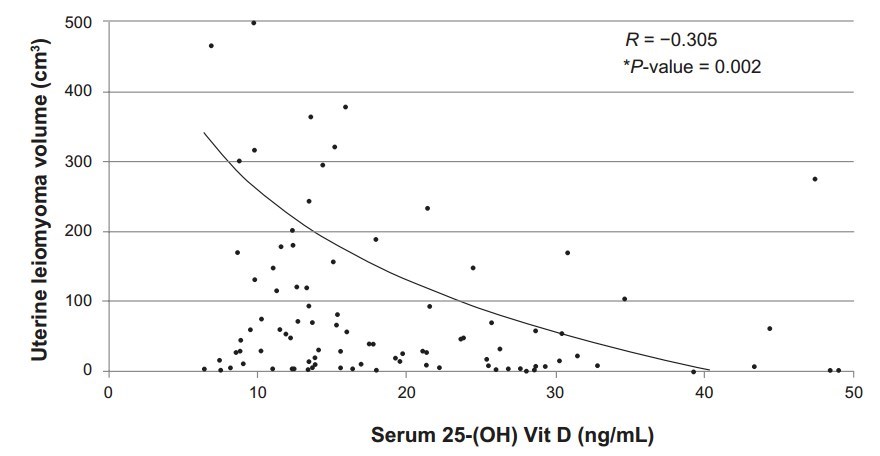 Uterine fibroids (hysterectomy) 32 percent more likely if less than 20 ng vitamin D – May 2013         Printer Friendly PDF this page! Follow this page for updates
This page is in the following categories (# of items in each category)
Women 144