UK parliament members starting to be interested in Vitamin D for COVID-19 – Oct 10, 2020 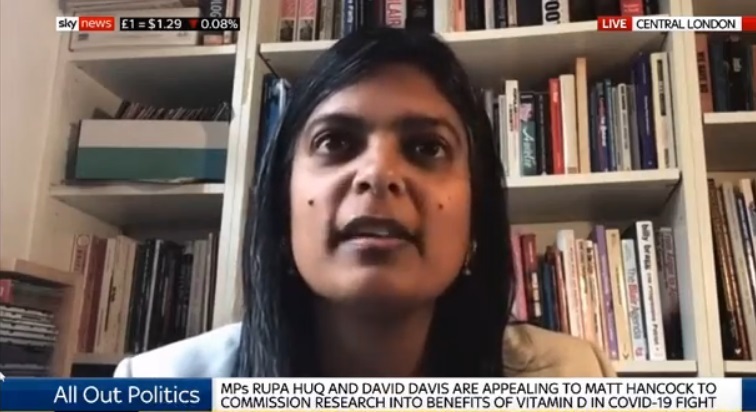 Her comments - from email


Who is who: by Robin Whittle
Vitamin-D-ophile British MPs,

00:00 Adam Boulton: Well, the Labor MP Rupa Huq has teamed up with the Conservative MP David Davis to appeal to the Health Secretary to commission urgent research into the benefits of vitamin D in the fight against Coronavirus and Rupa Huq joins me now. Thank you very much indeed, for being with us. I'm a little bit puzzled by this because of covering the COVID outbreak. I had experts talking to me about the possibility of vitamin D being a key factor in this outbreak. I went to see my GP the other day about another matter and he in conversation mentioned vitamin D. Why haven't we heard more about it?

00:39 Rupa Huq: Yeah. Look the more you look into it, there are studies as long as your arm from eminent scientists and I've mentioned this a couple of times in the Chamber. Every time I do, I'm deluged with medics emailing in, saying that the Health Secretary is wrong. He said that there was no association between COVID-19 and vitamin D. So David Davis and I went to see him yesterday and in one of those sit-down meetings, you can rationalize a bit more than across the Chamber, where it's these snippy exchanges and you never get a right of reply and I'm quite positive that he's looking into this now and just as long as we're not too late, because vitamin D is a weird one. It's not like a normal nutrient. It's not in food very much. We know vitamin C is in your citrus fruits and stuff. Vitamin D is only pretty much in oily fish and you have to eat a lot of it. It would be 10 portions of salmon a day I think, to get your required amount and it's in egg yolks.

01:35 RH: But it comes in UV rays as they hit the skin. So look, it's pretty murky outside now. We were meeting with Hancock when it was six o'clock, it was pitch black. I hope that we are not too late and why has it not been recommended up to now? Maybe it's 'cause it's sort of always been under our nose. Unlike some of these are the moon shots, things that we're promised, dexamethasone. Some of these are the new drugs. It's always been known for its properties on bones. So osteoporosis, that kind of thing but any vitamin really is good for immunity and up to now, the Health Department has been saying that it's not proven enough but the thing is, what have we got to lose really? We've got the worst death toll in Europe. It's not bad for you. So just putting it in government messaging to take your supplements, which I think you are now. Are you Adam? Do you feel a younger man?

02:29 AB: Well, I probably did [02:30] it. I'm not a doctor. You're not a doctor but it's also been suggested that vitamin D deficiency might explain why the BME community has been hit harder by this. Do you think there's anything in that?

02:46 RH: Yeah, you're right. When... And in fact, we first heard of it, didn't we, this year, when that PHE report came out and showed disproportionate numbers of deaths amongst the BME communities and one of the arguments given was that they're in frontline occupations, driving buses and Ubers, warehousing and medicine but then, if you look at the doctors, remember the faces of the original doctors who are dying, they all sort of seem to have the same pigmentation and it's a weird thing that the way it works with UV rays hitting the skin. If you've got darker skin, it doesn't... You need more of it, sort of thing.

03:17 RH: So the people that are most deficient in it are the elderly, the obese and the BME but to be honest, everyone in this country because it's a seasonal thing as well and it's a thing of how near you to the equator. It's latitudinal thing but in this country, it sort of depends on what time of year but most people, I think they say 60% of people anyway are deficient but BME people, even more so. So yeah, there is something in there but in countries where they have high levels of it, like New Zealand and the Nordic countries, they've had a very low number of deaths and it is something that can be supplemented in food. So I think in Sweden, they have it in their milk. It's added to dairy.

04:07 RH: Look, I'm sort of as I say, optimistic after our meeting. We had a good old sit down chat with him. David Davis has read... In fact he's been on this stuff for decades apparently. That's why he's such a picture of glowing health and fitness but Matt Hancock said he would go away and look at it. I think it should be in the messaging. So at the moment, we have these things like hands, face, space and the new Brexit one is check, change, go. They are just getting weirder and weirder to fathom what practically can you do.

04:38 RH: Whereas, if you did say "Take a vitamin D tablet" D3 I think it is, 'cause there's different ones, "every day." And it's very cheap. You can get it, for sort of between one and two quid from any high street pharmacy chain or your local pharmacy. So if you just said that as an extra thing. It's not a vaccine. It's not a smoking gun or a silver bullet but it's an extra thing as a preventative measure to stop people getting it and to ward off the worst effects. So I think they should put it in the messaging and then, if they're persuadable, apparently it wouldn't cost very much if the variant risk groups were prescribed it for free and David Davis...

05:17 AB: Well okay Rupa Huq, thank you very much indeed. I'm afraid that's all we have time for on All Out Politics for today.

A primary reason that they are open to solutions

The Increase may be associated with less UVB since July 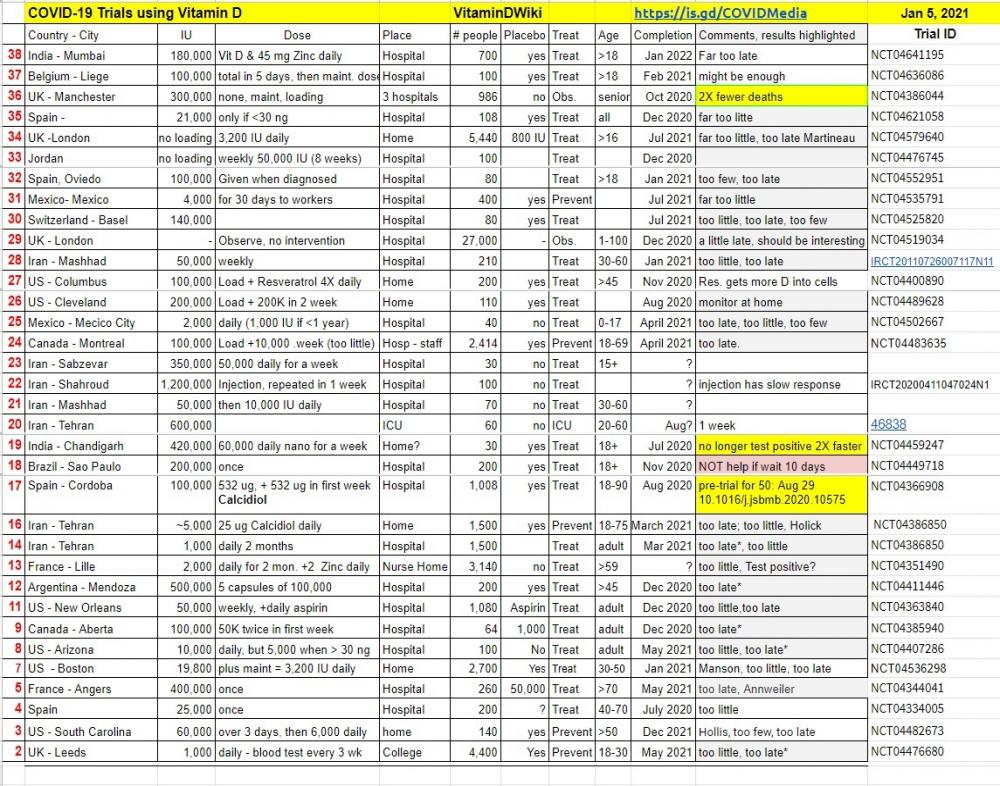 Note: Many trials are near them (UK, France, Spain, Switzerland)

UK parliament members starting to be interested in Vitamin D for COVID-19 – Oct 10, 2020         Printer Friendly PDF this page! Follow this page for updates
This page is in the following categories (# of items in each category)
Vitamin D in Europe 206 Virus 355