Vitamin D Binding Protein (GC) gene can decrease the bio-available Vitamin D that can get to cells,

VDBP is NOT directly detected by vitamin D blood tests 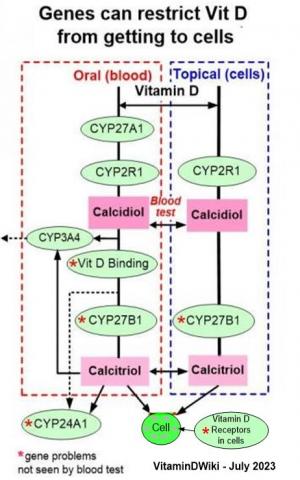 Higher total 25-hydroxyvitamin D [25(OH)D] levels are associated with an improvement in survival among colorectal cancer (CRC) patients, but the relationships between plasma vitamin D binding protein (VDBP), bioavailable or free 25(OH)D, and CRC survival remain unknown. In two prospective cohort studies, the Health Professionals Follow-Up Study and the Nurses’ Health Study, we examined the association between prediagnostic plasma levels of VDBP, bioavailable 25(OH)D, and free 25(OH)D and survival among 604 participants diagnosed with CRC between 1991 and 2011. Plasma 25(OH)D and VDBP were directly measured, while bioavailable and free 25(OH)D were calculated using a validated formula based on total 25(OH)D, VDBP, and albumin levels. Cox proportional hazards models were used to estimate hazard ratios (HRs) for overall and CRC-specific mortality, adjusted for other prognostic markers and potential confounders.
During the follow-up, there were 279 deaths, 177 of which were due to CRC (63%). Higher VDBP levels were associated with a significant improvement in overall and CRC-specific survival (Ptrend=0.005 and 0.02, respectively).

Compared to patients in the lowest quartile, those in the highest quartile of VDBP had a multivariable-adjusted HR of 0.61 (95% confidence interval CI, 0.42-0.89) for overall mortality and 0.56 (95% CI, 0.35-0.92) for CRC-specific mortality. The results remained similar after further adjustment for total 25(OH)D levels. In contrast, no association with overall or CRC-specific mortality was observed for bioavailable or free 25(OH)D levels. In conclusion, higher prediagnostic plasma VDBP levels were associated with improved survival among CRC patients. The clinical utility of VDBP as a prognostic marker warrants further exploration, as well as research into underlying mechanisms of action.

Printer Friendly PDF this page! Follow this page for updates
This page is in the following categories (# of items in each category)
Cancer - Colon 109 Vit D Binding Protein 132
Edit Comments
See any problem with this page? Report it (FINALLY WORKS)