Tonsillectomy may be an indicator of low vitamin D status

Tonsils and Adenoids become inflamed when a child is fighting infection
Adenoids are lymph nodes above the tonsils
When they become inflamed they need to be aided, by vitamin D?, but not removed
400,000 Tonsillectomies per year in US costing $ 5,400 each average 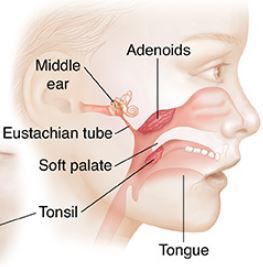 Note: Would need to breath thru the nose, not the mouth, to get any inhaled vitamin D to adenoids

Huge difference in rate of tonsil removals in different countries 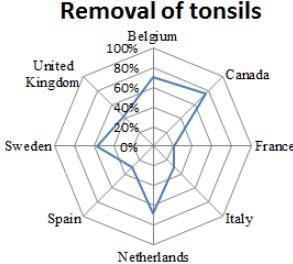 My opinion:
Low vitamin D increases the risk of many immune system problems, such as Tonsilitis
Tonsilitis might be treated vitamin D supplements
Removal of tonsils result in increased risk of various health problems:
respiratory, cancers, allergies, deep neck infection, etc.
Suspect that Vitamin D spayed orally or inhaled would be better
Getting vitamin D to the spot that needs it is very important
Henry Lahore, founder of VitaminDWiki

Importance Surgical removal of adenoids and tonsils to treat obstructed breathing or recurrent middle-ear infections remain common pediatric procedures; however, little is known about their long-term health consequences despite the fact that these lymphatic organs play important roles in the development and function of the immune system.

Design, Setting, and Participants A population-based cohort study of up to 1 189 061 children born in Denmark between 1979 and 1999 and evaluated in linked national registers up to 2009, covering at least the first 10 and up to 30 years of their life, was carried out. Participants in the case and control groups were selected such that their health did not differ significantly prior to surgery.

Exposures Participants were classified as exposed if adenoids or tonsils were removed within the first 9 years of life.

Results A total of up to 1 189 061 children were included in this study (48% female); 17 460 underwent adenoidectomy, 11 830 tonsillectomy, and 31 377 adenotonsillectomy; 1 157 684 were in the control group. Adenoidectomy and tonsillectomy were associated with a 2- to 3-fold increase in diseases of the upper respiratory tract (relative risk [RR], 1.99; 95% CI, 1.51-2.63 and RR, 2.72; 95% CI, 1.54-4.80; respectively). Smaller increases in risks for infectious and allergic diseases were also found: adenotonsillectomy was associated with a 17% increased risk of infectious diseases (RR, 1.17; 95% CI, 1.10-1.25) corresponding to an absolute risk increase of 2.14% because these diseases are relatively common (12%) in the population. In contrast, the long-term risks for conditions that these surgeries aim to treat often did not differ significantly and were sometimes lower or higher.

Conclusions and Relevance In this study of almost

surgeries were associated with increased long-term risks of respiratory, infectious, and allergic diseases. Although rigorous controls for confounding were used where such data were available, it is possible these effects could not be fully accounted for. Our results suggest it is important to consider long-term risks when making decisions to perform tonsillectomy or adenoidectomy.


Study reported on by GreenMedInfo (Founder of which had severe respiratory problems after A&T removal)
“Children who had undergone tonsillectomies were found to have a nearly three-fold increase in the risk of developing certain diseases of the upper respiratory tract, including 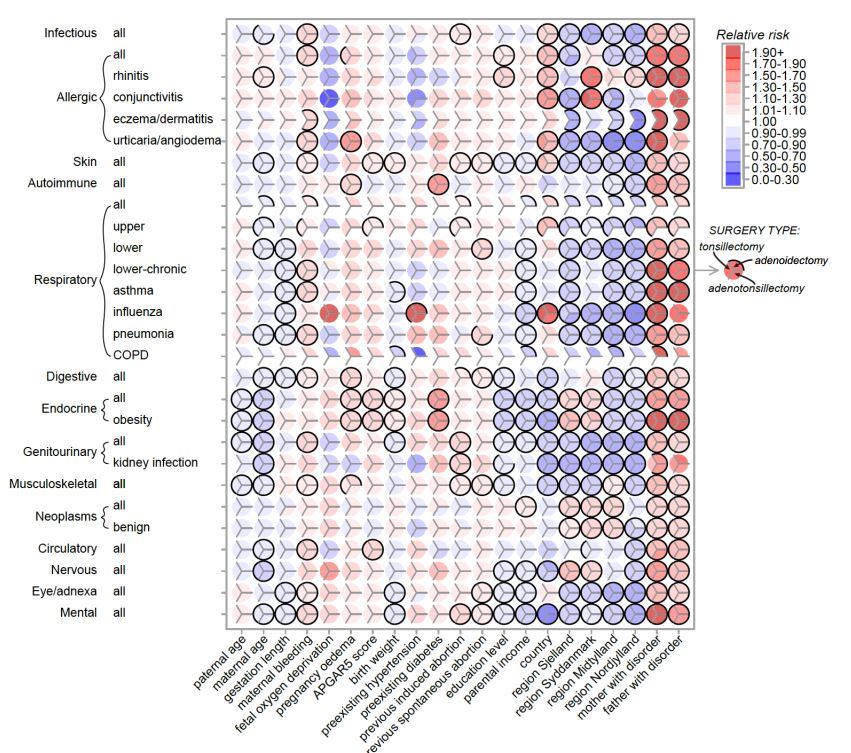 Relative risk magnitude and direction correspond to red (increased relative risk) and blue (decreased relative risk) colors (see key, top right) derived from Cox regressions capturing the risk of diseases (vertical axis) within the first 30 years of life depending on 21 covariates (horizontal axis). Within each circle there are three divisions corresponding to
surgery type (see mid-right key). A black border indicates whether risk for that particular disease-covariate combination was significant after Bonferroni correction for 78 tests; a complete black border surrounding a circle indicates that risks were
significant for all three surgeries. Disease risks for the covariate ‘region most lived in Denmark’ are relative to Hovedstaden (Copenhagen region).
&nbspDownload the PDF from VitaminDWiki

Removing Your Tonsils Is a Bad Idea - Mercola June 2018

Removing Your Tonsils Is a Bad Idea

Adenoids and Tonsils worse with low vitamin D, worse in the winter when D is low - Jan 2017

Is there an association between vitamin D deficiency and adenotonsillar hypertrophy in children with sleep-disordered breathing? 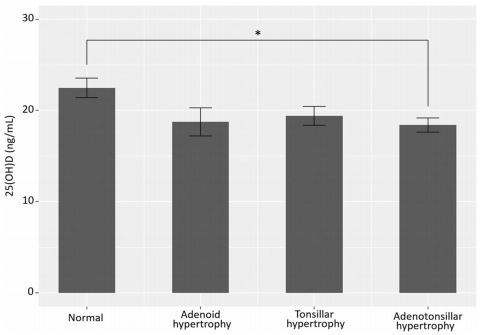 OBJECTIVE: Because of the recent data supporting an immunoregulatory role for vitamin D, we evaluated levels of vitamin D in children undergoing adenotonsillectomies (T&A) and controls.
METHODS: We prospectively collected data from 47 children undergoing T&As and 15 undergoing unrelated elective procedures at a tertiary care children's hospital. Demographic and disease specific data was obtained in addition to a blood sample for the measurement of 25-hydroxy (OH)-vitamin D.
RESULTS: There were no differences in vitamin D levels between the groups and levels did not correlate to any disease parameters in the children undergoing T&A. The only significant differences were related to race in that African American children had significantly lower vitamin D levels compared to Caucasians.
CONCLUSION: This pilot study did not show an association between serum vitamin D and the need to have adenotonsillectomy.

METHODS: A 106 children undergone tonsillectomy due to recurrent tonsillitis and a 127 healthy children aging between 2 and 12 years were enrolled in this study, to determine serum 25-hydroxyvitamin D level and vitamin D receptor gene polymorphisms (Apa1, Taq 1, fok1). Serum vitamin D level was measured with ELISA (nmol/L) and receptor gene polymorphism was determined by PCR. Vitamin D serum level below 80nmol/L was accepted as insufficient.

The role of vitamin D in children with recurrent Tonsillopharyngitis - 2012

There was no significant differences in vitamin D receptor gene polymorphisms between groups.

Conclusion: Serum 25-OH vitamin D levels in recurrent tonsillitis group were lower than those in healthy children. But, there was no difference in the incidence of vitamin D receptor gene polymorphism between the two groups.
&nbspDownload the PDF from VitaminDWiki

Items in both categories Breathing and Infant/Child are listed here:

Items in both categories Immunity and Infant/Child are listed here:

Items in both categories Immunity and Breathing are listed here:

Immunity category listing has 221 items along with related searches
Tonsillectomy may be an indicator of low vitamin D status         Printer Friendly PDF this page! Follow this page for updates
This page is in the following categories (# of items in each category)
Immunity 221 Infant-Child 678