2 publications of the extremely short trial are on this page

Correcting Vitamin D Insufficiency Improves Some, But Not All Aspects of Physical Performance during Winter Training in Taekwondo Athletes. 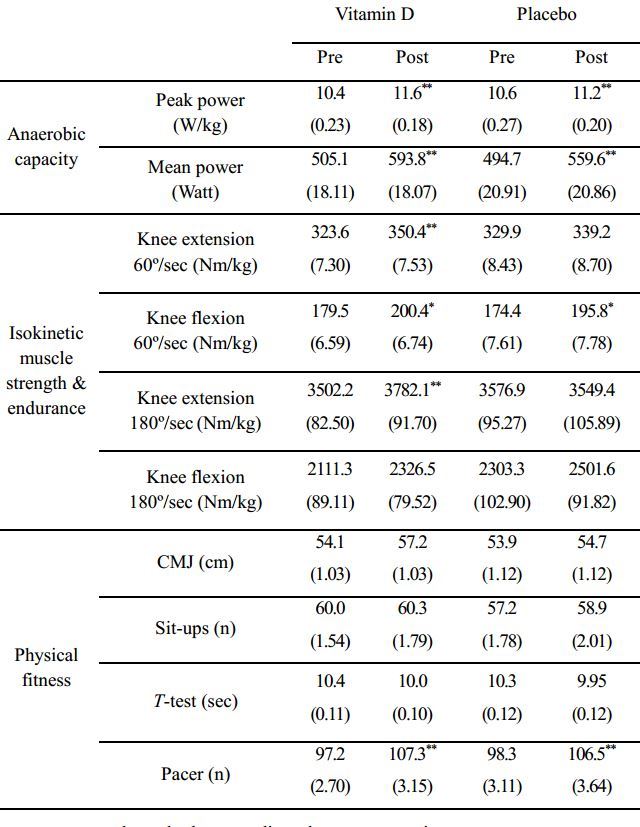 Changes in serum 25(OH)D concentration were positively associated with changes in peak power, and isokinetic knee extension at 180°/sec. However, no significant interaction effects were observed in other performance variables. This study suggests that four weeks of vitamin D supplementation elevates serum 25(OH)D concentration to sufficient levels. Correcting vitamin D insufficiency improves some, but not all aspects of performance. Thus, efficacy of vitamin D supplementation to enhance performance remains unclear.

Still not much results since the trial lasted only 1 month and they monitored the respiratory track problems from the first day, even though it would take 2-4 months to restore the levels of vitamin D
&nbspDownload the PDF from VitaminDWiki

Printer Friendly PDF this page! Follow this page for updates
This page is in the following categories (# of items in each category)
Sports and Vitamin D 229 Intervention 625
Edit Files 2