Normalization of Vitamin D Status is Associated with Reduced Risk of Surgery and Hospitalization in Inflammatory Bowel Disease: A Prospective Study

Introduction: Vitamin D may have an immunological role in Crohn's disease (CD) and ulcerative colitis (UC). Retrospective studies suggested a weak association between vitamin D status and disease activity but have been limited by inability to prospectively examine this hypothesis after excluding vitamin D values measured after outcomes of interest. Furthermore, no studies have examined whether normalization of vitamin D status is associated with improvement in patient outcomes.

Methods: Using a multi-institution validated inflammatory bowel disease (IBD) cohort, we identified all CD and UC patients who had at least one measured plasma 25-hydroxy vitamin D 25(OH)D. Our main outcomes were occurrence of first IBD-related surgery and IBD-related hospitalization. Secondary outcome included median C-reactive protein. We restricted our analysis to 25(OH)D measurements prior to the first surgery or IBD-related hospitalization. Logistic regression models adjusting for potential confounders were used.

Conclusion: To our knowledge, ours is the first study demonstrating prospectively that 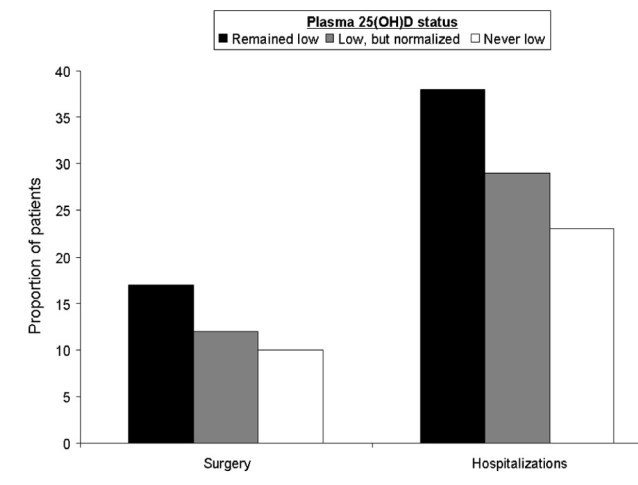 Surgery for Crohn's disease 2X less likely if managed to raise vitamin D above 30 ng – May 2013         Printer Friendly PDF this page! Follow this page for updates
This page is in the following categories (# of items in each category)
Gut 163

Is vitamin D supplementation a viable treatment for Crohn&#039;s disease – No...