Early-life adversity and long-term neurobehavioral outcomes: epigenome as a bridge? 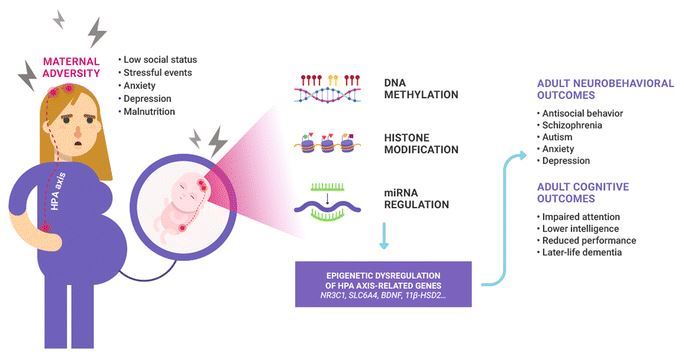 Accumulating evidence suggests that adversities at critical periods in early life, both pre- and postnatal, can lead to neuroendocrine perturbations, including hypothalamic-pituitary-adrenal axis dysregulation and inflammation persisting up to adulthood. This process, commonly referred to as biological embedding, may cause abnormal cognitive and behavioral functioning, including impaired learning, memory, and depressive- and anxiety-like behaviors, as well as neuropsychiatric outcomes in later life.
Currently, the regulation of gene activity by epigenetic mechanisms is suggested to be a key player in mediating the link between adverse early-life events and adult neurobehavioral outcomes.
Role of particular genes, including those encoding glucocorticoid receptor, brain-derived neurotrophic factor, as well as arginine vasopressin and corticotropin-releasing factor, has been demonstrated in triggering early adversity-associated pathological conditions.
This review is focused on the results from human studies highlighting the causal role of epigenetic mechanisms in mediating the link between the adversity during early development, from prenatal stages through infancy, and adult neuropsychiatric outcomes. The modulation of epigenetic pathways involved in biological embedding may provide promising direction toward novel therapeutic strategies against neurological and cognitive dysfunctions in adult life.

Stressors as a fetus or child can cause health problems in adult (perhaps via epigenetics) – Dec 2017         (Cached) Printer Friendly PDF this page! Follow this page for updates
This page is in the following categories (# of items in each category)
Pregnancy 782 Off Topic 136 Infant-Child 663

Beneficial action of resveratrol: How and why (BNDF, etc.)– Feb 2016Health problems can persist through many generations – Epigenetics and Vitamin DNerve growth and survival depends on BDNF (Brain-Derived Neurotrophic Factor)...