Background
Levels of vitamin D in the population have come under increasing scrutiny, however there are only a few studies in Australia which measure levels in the general population. The aim of this study was to measure the levels of vitamin D within a large population cohort and examine the association with seasons and selected demographic and health risk factors.

Methods
A longitudinal cohort study of 2413 participants in the northwest suburbs of Adelaide, South Australia conducted between 2008 and 2010 was used to examine serum levels of 25-hydroxy vitamin D (25(OH)D) in relation to demographic characteristics (age, sex, income, education and country of birth), seasons, the use of vitamin D supplements and selected health risk factors (physical activity, body mass index and smoking). Both unadjusted and adjusted mean levels of serum 25(OH)D were examined, as were the factors associated with the unadjusted and adjusted prevalence of serum 25(OH)D levels below 50 and 75 nmol/L.

Results
Overall, the mean level of serum 25(OH)D was 69.2 nmol/L with 22.7% of the population having a serum 25(OH)D level below 50 nmol/L, the level which is generally recognised as vitamin D deficiency. There were significantly higher levels of 25(OH)D among males compared to females (t = 4.65, p < 0.001). Higher levels of 25(OH)D were also measured in summer and autumn compared with winter and spring. Generally, mean levels of 25(OH)D were lower in those classified as obese. Smokers and those undertaking no or less than 150 minutes/week of physical activity also had lower levels of serum vitamin D. Obesity (as classified by body mass index), season and undertaking an insufficient level of physical activity to obtain a health benefit were significantly associated with the prevalence of vitamin D deficiency.

Conclusions
Vitamin D deficiency is prevalent in South Australia, affecting almost one quarter of the population and levels are related to activity, obesity and season even when adjusted for confounding factors. Improved methods of addressing vitamin D levels in population are required.

Evolution seems to indicate a vitamin D level of 45-60 ng: click on chart for details 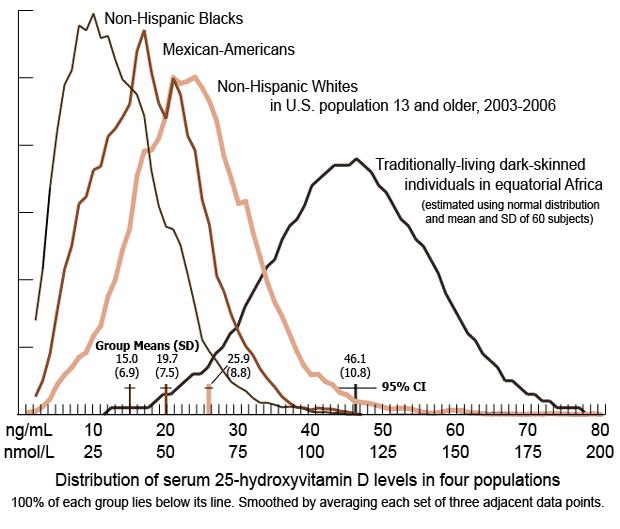 South Australians: 88 percent had less than 40 ng of vitamin D (lots more statistics) – Sept 2014         Printer Friendly PDF this page! Follow this page for updates
This page is in the following categories (# of items in each category)
Vitamin D in Australia and New Zealand 64 Optimum 93