IGF and IGFBP as an index for discrimination between vitamin D supplementation responders and nonresponders in overweight Saudi subjects.

200 Overweight Saudis, average age 40, with Vitamin D levels < 20 ng
3 sets of 8 weeks supplementation for each of the following 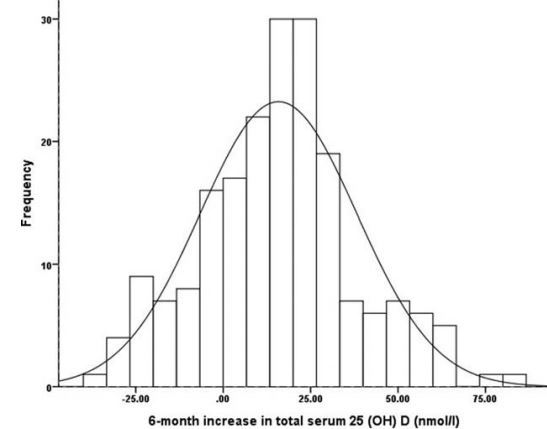 Note: Some overweight subjects experienced a DECREASE in Vitamin D blood levels
Probably due to not adjusting the resuts for seasonal change which is typical in most people

Vitamin D deficiency is common in the Kingdom of Saudi Arabia (KSA). Therefore, it is significant to recognize which biochemical markers modulate serum 25 hydroxyvitamin D (25(OH)D) in response to vitamin D supplementation in such a population. Our aim was to study the correlation of insulin-like growth factor (IGF) and insulin growth factor binding protein (IGFBP) with serum 25(OH)D in response to vitamin D supplementation in a Saudi population. A total of 199 (89 males/110 females) vitamin D deficient subjects (25(OH)D level <50 nmol/L), aged 40.4 ± 11.4 years, were given vitamin D supplements (50,000 IU/mL every week) for the first 2 months, then twice a month for 2 months, followed by daily 1000 IU in the last 2 months. Fasting blood samples were taken at baseline and 6 months after the final dose of vitamin D. Serum 25(OH)D, IGF-1 and IGF-2, and IGFBPs 2-5 were measured. Vitamin D response was computed for all subjects as the difference in levels of serum 25(OH)D concentration at the end of 6 months compared to baseline. After intervention, serum 25(OH)D concentration significantly increased from 35.6 nmol/L (26.6-43.5) to 61.8 nmol/L (54.8-73.3) in responder subjects (P < .01) and from 35.1 nmol/L (21.2-58.2) to 38.3 nmol/L (25.5-48.3) in nonresponders (P = .13). Subjects with lower baseline serum IGF-II, IGFBP-2, and IGF-1/IGFBP-3 ratio are more sensitive to acute vitamin D status changes. IGF1 and IGF-1/IGFBP-3 ratio significantly increased in all subjects after 6 months (P = .01). Changes in 25(OH)D was significantly associated with changes in IGFBP-2 and IGF-1/IGFBP-3 ratio in responders only. This study proposes that changes in circulating IGF-I and IGFBP-3 are modulated by vitamin D supplementation and can be taken into consideration in investigations involving vitamin D correction. Moreover, increase in serum 25(OH)D and IGF-I/IGFBP-3 molar ratio are more sensitive markers for the response to vitamin D supplementation in Saudi population.

Printer Friendly PDF this page! Follow this page for updates
This page is in the following categories (# of items in each category)
How much Vitamin D 329 Loading dose for Vitamin D 142
Edit Comments Files 1