My 102 year-old father-in-law moved in with us June 2015.
I found that he has to urinate 3 times per night
reviewed people's comments on web forums to see what works.
The following are the scientific studies of of what people have found to work
I have decided to try him on the best three concurrently, and perhaps later narrow down to what is needed. 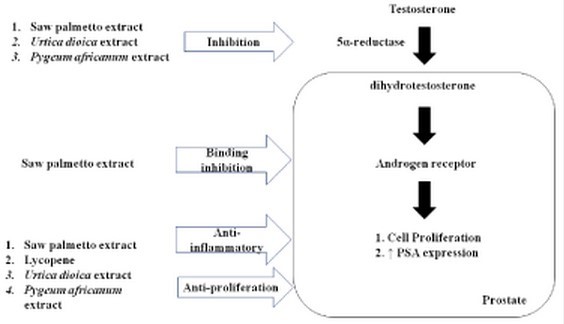 One company states that the ripest berries provide the most benefit 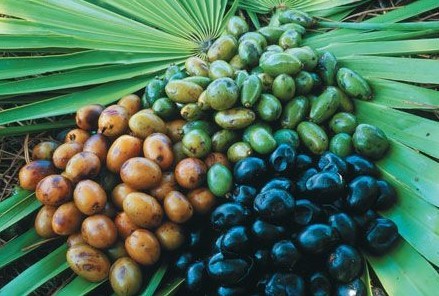 Note: One company states that the ripest berries provide the most benefit

Efficacy and safety of drug with plant extract of saw palmetto in patients with lower urinary tract symptoms because of benign prostatic enlargement
12 months 320 mg (Prostasan), IPSS (International Prostate Symptom Score) score reduced from 14 to 11
"patients and doctors rated the efficacy of drug as good (69.7% and 72.4%) "

Saw Palmetto for Benign Prostatic Hyperplasia
In this double-blind trial, we randomly assigned 225 men over the age of 49 years who had moderate-to-severe symptoms of benign prostatic hyperplasia to one year of treatment with saw palmetto extract (160 mg twice a day) or placebo.

Saw palmetto has undergone numerous trials and meta-analyses for BPH, with mixed results.

Efficacy and Acceptability of Tadenan®(Pygeum africanum Extract) in the Treatment of Benign Prostatic Hyperplasia (BPH): A Multicentre Trial in Central Europe
2 months of 50 mg twice a day
Initially nocturia was 2.6 times per night. ==>1.8 per night (32% reduction)
Initially International Prostate Symptom Score was 16. ==> 9.6 (40% reduction)
Researchers were surprised to find that many of the benefits lasted for one month after supplementation was stopped.
Publisher wants $52 for the study

http://examine.com/supplements/Pygeum
Urinary complications with Benign prostatic hyperplasia appear to be reduced with Pygeum supplementation in the range of 19-23% (including nocturia, residual urine volume,. . .
The bark of Pygeum tends to contain . . β-sitosterol (349-583mg/kg)
Also has a discussion on 2002 Cochrane meta-analysis of Pygeum

Beta-sitosterols for benign prostatic hyperplasia
"The review found that beta-sitosterol treatments were well tolerated and improved urinary symptoms and flow measures in men with mild to moderate BPH."   full free text for patients, otherwise the publisher charges for the study

Off topic - Prostate problem (BPH) reduced by herbs         Printer Friendly PDF this page! Follow this page for updates
This page is in the following categories (# of items in each category)
Cancer - Prostate 94 Off Topic 133