Off topic: Low salt is actually bad for you - IoM reversal Summer 2013

From Dr. Heany's Blog (who also blogs a lot about Vitamin D)

Also has video
Over the years I have attended many official dinner events, usually seated next to people not previously known to me. When I would ask one of my table companions to pass the salt shaker, I would inevitably be greeted with, “You’re a doctor! You know salt is bad for you . . .” It’s something everybody seemed to know. Is it true? What are the facts?

While the foregoing is accurate, it’s only a part of the story. First, what we colloquially call “salt” is chemically, sodium chloride. Both sodium and chloride are nutrients. A nutrient is a substance the body needs for health but which it cannot make for itself. The reason sodium and chloride are essential is that our blood and body fluids are intrinsically salty – a reflection of the saltiness of the sea in which vertebrate life evolved on our planet. The body absolutely depends upon a certain degree of saltiness – anything appreciably more dilute or more concentrated is not compatible with life (let alone health). In maintaining the ideal concentration, the body regulates body water and blood volume up and down. Blood volume in turn is a major factor in maintaining normal blood pressure – which is the amount of force needed to pump blood to all the vital organs and to push it through the tiny blood vessels that nourish the billions of cells in our tissues.

Salt is at the very heart of this system. Salt, of course, is needed for saltiness. We lose salt every day in sweat, tears, and urine; and it has to be replaced. The role of salt intake is so central that all land-living vertebrates exhibit what is called a “salt appetite”, meaning they are drawn to natural sources of salt – salt licks, brine pools, and the like, which abound in the landscape. Mark Kurlansky, in his fascinating book “A World History of Salt” notes that the early American pioneers, exploring the territory west of the Appalachian Mountains, didn’t have to hack their way through dense forest. They simply followed the trails blazed by generations of wild animals leading to salt sources. That preference for things with a salty taste is driven not so much by the taste itself as by the animal’s own management of its internal environment. When it senses a decrease in central blood volume, salt appetite increases; and when that volume is adequate, the drive to find salt abates. Exactly that same regulation occurs in modern humans and, while it is possible to develop a taste for salt that exceeds our actual needs (which is where the common perception that perhaps we get too much comes into the picture), it is also true that basically, our drive to eat salty foods reflects real need to maintain an adequate body salt content.

There should be no doubt: the body absolutely needs sodium. The real question, as for most nutrients, is not whether it’s essential, but how much is enough? How much is too little? And how much is too much?

Those “how much” questions for all nutrients are answered for us in the U.S. and Canada mainly by a quasi-governmental body called the Institute of Medicine (IOM), which periodically publishes recommendations for the intakes of all nutrients, based on its up-to-date evaluation of the continuously accumulating evidence. [Another source of related guidance is the “Dietary Guidelines for Americans” published every 5 years by the U.S. Departments of Agriculture and Health and Human Services.] Over the past 40 years both bodies have emphasized what they thought was the importance of reducing salt intake. This thrust dates back at least to 1972, when the recommendation was to “use salt in moderation”. The pace quickened over the next 40 years with each successive set of recommendations, reaching a peak in the 2005 IOM recommendations, which called for keeping total sodium intake under 1500 mg per day for adults up to age 50, and under 1300 from age 50 to 70. To put these numbers in perspective, it’s helpful to note that average sodium intake in the U.S. and much of Europe is between 3400 and 3600 mg per day, and has been constant at that figure for as long as it’s been measured. So, if 1500 mg per day is the right number, then it’s clear that we’re all eating way too much salt. However, the fact that sodium intake hasn’t budged despite massive public education campaigns (and the awareness of my dinner companions) suggests that this is the intake that “seems” right to our bodies.

Not widely recognized is the fact that the severely restrictive recommendations of the IOM have not elicited a consensus within the scientific community. Several years ago the editor-in-chief of the Journal of the American Medical Association was quoted in an article in Science as saying that these current recommendations “go way beyond the evidence”. That was not a solitary dissent by any means, as other prestigious scientific journals have recently published editorials making the same point – namely that there was no evidence of benefit from such low intakes, and, in fact, no assurance that they were not actually harmful.

The 40-year era of attempting to reduce everyone’s salt intake came to an end on May 14, 2013, when the IOM issued new guidelines for American salt intakes. Recent studies had provided compelling evidence that salt intake in the range recommended by the IOM in 2005 could actually increase heart-related illness and death. So, in a dramatic reversal, the 2013 recommendation acknowledged that there was no evidence that reducing intake below 2300 mg per day was beneficial. It said that it thought U.S. sodium intake was still higher than it ought to be; however that statement seems to me to have been more a concession to the anti-sodium forces in the nutrition policy establishment, than an evidenced-based conclusion.

The reasons behind this shift can be briefly summarized as follows: The chemical messengers (hormones) that humans produce to throttle back salt losses from the body are compounds called renin, angiotensin, and aldosterone. These hormones begin to be produced in increased amounts when sodium intakes drop below about 3200 mg/d. The lower the intake gets, the more of these protective compounds is produced. These are what are called in physiology “rescue” mechanisms, which means they function to tide an organism over a temporary problem (as from sudden blood loss or dehydration), until the animal (or human) can access the salt and water it needs to restore central blood volume. In that sense, they’re just like adrenaline, which is also produced in times of stress (though of a different sort). They’re both emergency tools, automatically deployed by the body in times of need.

The principal problem with the 2005 IOM recommendation (under 1500 mg sodium per day) was that, if followed, it would create a situation in which these rescue mechanisms were being constantly deployed. There has been evidence for years that sustained high levels of renin, for example, actually increase the risk of heart attacks and cardiac death, particularly in patients who already had heart disease.
Until recently the IOM had simply focused on the blood pressure effects of sodium intake reduction – believing apparently that any decrease in blood pressure was good for you – and ignoring (or unaware of) the harmful effects of living 24/7 with high levels of the rescue hormones. Belatedly the emphasis has now shifted from blood pressure (with implications for health) to the actual health outcomes themselves.

Another problem with the 2005 IOM recommendations – indeed with most IOM nutrient intake recommendations – is that they treat individual nutrients in isolation. But, as I have noted in earlier posts, nutrients are like the instruments in a symphony orchestra. They play together and the totality is often more than the sum of the parts (see “Change your oil, Ma’am?”). It is known, for example, that increasing intake of calcium and potassium to levels closer to what our ancestors received (see “Defining Normal – Lessons from our ancestors”) lowers blood pressure as much as does the most severe restriction of sodium intake. A small fraction of the modern human population has what is termed “salt sensitivity”. Their blood pressure does go up as salt intake increases. But ensuring adequate calcium and potassium intakes minimizes or protects against this tendency, a fact that the anti-sodium bloc had ignored.

I have heard complaints about this recent IOM reversal, not so much from people who disagree – but from people who say “What are we to do? We thought we could count on the IOM to tell us what was right.” The good news response is that science is a self-correcting enterprise. All we can tell you today is what we know today. And when we know more or know better, we will tell you that. Perhaps all along we should have communicated the inevitable tentativeness of any conclusions that we can draw. Unfortunately, people often want more certainty than the science permits. Also, scientists themselves are not always totally dispassionate or objective. It’s easy to feel certain about something one cares deeply about, and scientists, being human, often are vocal advocates for one position or another. Sometimes it seems that the one who shouts the loudest gets his viewpoint adopted by the others. But in science, at least, that’s only temporary. Sooner or later, as the impact of personality fades and the mass of the evidence grows, science rights itself.

Bottom line. For the average healthy person, be assured that your current sodium intake is probably OK. The U.S. average of about 3450 mg sodium per day is just above the point where the rescue mechanisms begin to kick in. So it’s not too much by any means. On the other hand, an intake of 6000 mg/day or higher can increase your risk of developing high blood pressure. So 6000 is too much. If you have a medical condition and are under the care of a physician who has recommended reduced sodium intake, take his/her advice; you’re paying for it. But, in view of the new IOM statement that there is no evidence of benefit for intakes below 2300 mg sodium per day, you might wish to ask your physician whether he/she is aware of the change and seek reassurance that continuing on a low salt diet is actually right for you.

We anticipate that it will take one or two decades to change attitudes about salt, somewhat similar amount of time to change attidues about vitamin D

Dr. Dowd believes that excreting too much salt decreases vitamin D in the body
Wonder if bodies are trying to preserve vitamin D by retaining more salt - even if doing so results in high blood pressure?

Most things are a result of a trade off - perhaps salt retention is too.

No Benefit Seen in Sharp Limits on Salt in Diet NYT May 2013
As you go below the 2,300 mark, there is an absence of data in terms of benefit and there begin to be suggestions in subgroup populations about potential harms,

Sodium: How and How Not to Set a Nutrient Intake Recommendation - Dr. Heaney again. who has the following graphic 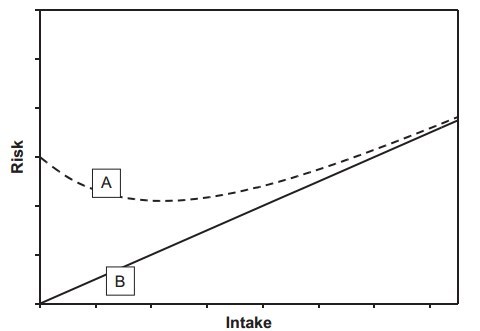 Figure  2. Contrast between a J-shaped curve and a linear curve of risk on intake.
Curve A  is the curve recently reported for sodium and generally accepted for most other nutrients;
curve B is the curve implicitly employed in the setting of sodium Dietary Reference Intakes. 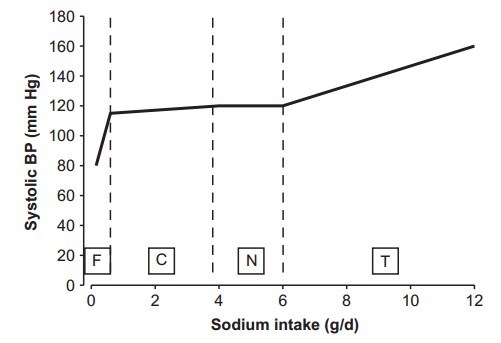 Figure 3. Diagrammatic representation of blood pressure over 4 zones of sodium intake.
Zone F is severe deficiency;
zone C is moderate deficiency;
zone N is normal; and
zone T is toxicity.
PDF is attached at the bottom of this page

Off topic: Low salt is actually bad for you - IoM reversal Summer 2013         Printer Friendly PDF this page! Follow this page for updates
This page is in the following categories (# of items in each category)
Top news 849