YES!! by admin of VitaminDWiki

40 years ago I discovered that about 3 hours of exercise each week felt best.
I have not missed a single week of exercise since then. (I added vitamin D in 2009)
I tried more than 3 hours per week - but found that the benefits decreased - as is indicated by this study

Of course, this study might just as well have concluded that people who weigh less (and can exercise more) live longer

Methods and Findings
We examined the association of leisure time physical activity with mortality during follow-up in pooled data from six prospective cohort studies in the National Cancer Institute Cohort Consortium, comprising 654,827 individuals, 21–90 y of age. Physical activity was categorized by metabolic equivalent hours per week (MET-h/wk). Life expectancies and years of life gained/lost were calculated using direct adjusted survival curves (for participants 40+ years of age), with 95% confidence intervals (CIs) derived by bootstrap. The study includes a median 10 y of follow-up and 82,465 deaths. A physical activity level of 0.1–3.74 MET-h/wk, equivalent to brisk walking for up to 75 min/wk, was associated with a gain of 1.8 (95% CI: 1.6–2.0) y in life expectancy relative to no leisure time activity (0 MET-h/wk). 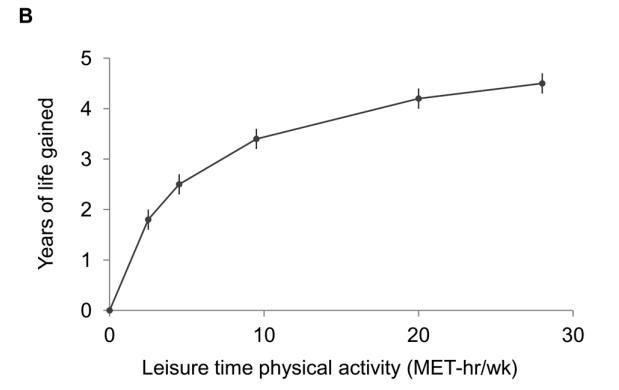 Leisure time physical activity level and hazard ratios for mortality and gains in life expectancy after age 40.The points shown represent the HR (A) or years of life gained (B) for each of the physical activity categories examined, and the vertical lines represent the 95% CIs for that physical activity category. The reference category for both (A) and (B) is 0.0 MET-h/wk of leisure time physical activity. The lines connecting the points help to illustrate the dose–response relationship between physical activity and risk of mortality; the shape of the association shown here is similar to that obtained using spline modeling (Figure S1). HRs were calculated in models stratified by study that used age as the underlying time scale. Multivariable models were adjusted for gender, alcohol consumption (0, 0.1–14.9, 15.0–29.9, 30.0+g/d), education (did not complete high school, completed high school, post-high-school training, some college, completed college), marital status (married, divorced, widowed, unmarried), history of heart disease, history of cancer, BMI (,18.5, 18.5–19.9, 20–22.4, 22.5–24.9, 25–27.4, 27.5–29.9, 30+kg/m 2), and smoking status (never, former, current). Years of life expectancy gained after age 40 were derived using direct adjusted survival curves 31,32 for participants who were 40+y of age at baseline (97.5% of participants). 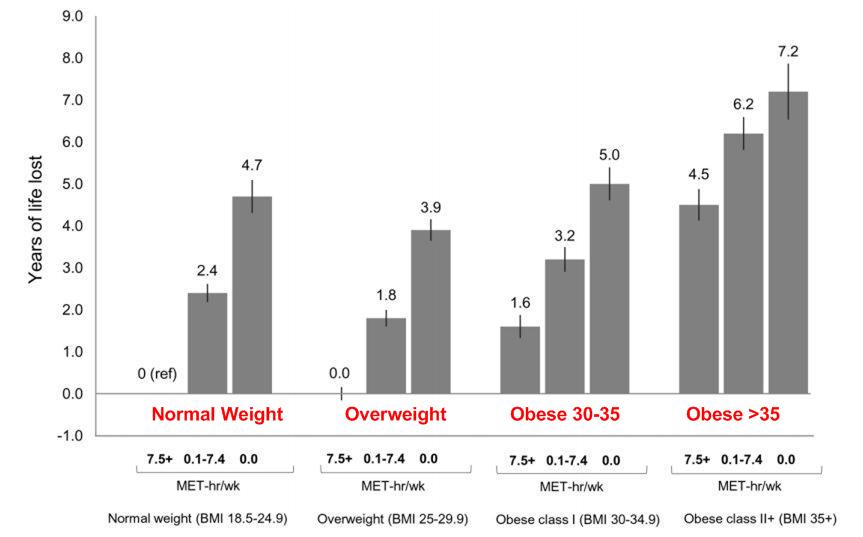 PDF and supporting tables are online

Printer Friendly PDF this page! Follow this page for updates
This page is in the following categories (# of items in each category)
Sports and Vitamin D 229 Off Topic 129
Edit Comments Files 2