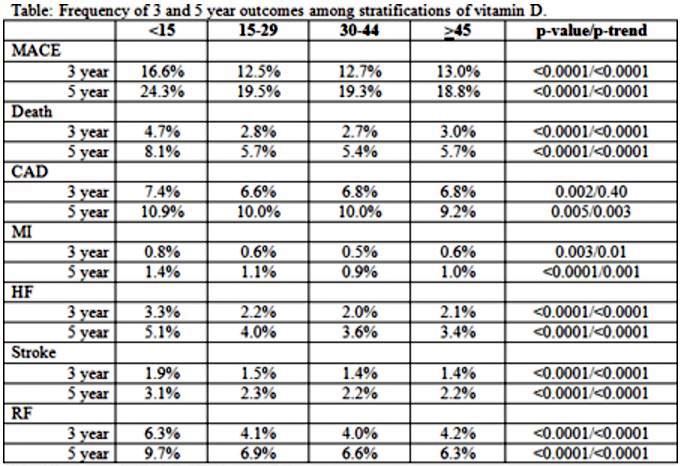 The Meta-analyses of Cardiovascular and Vitamin D

Hypothesis: Among a large general population of patients undergoing clinical testing for vitD, a specific threshold level below which CV risk rises can be identified.

Methods: All patients in the Intermountain Healthcare clinical database with at least one vitD level and no history of heart or renal failure were identified. Baseline vitD levels were stratified into four groups (

Conclusions: Among a large general population undergoing clinical testing for vitD, a 35% increased CV risk was identified, and was limited to only those with vitD levels <15 ng/mL, comprising 9.2% of the entire group. It is therefore likely that any clinical cardiovascular benefits from vitD supplementation will be limited to those with the lowest baseline vitD levels.

Printer Friendly PDF this page! Follow this page for updates
This page is in the following categories (# of items in each category)
Cardiovascular 422 Hypertension 132 Stroke 89
Edit Comments Files 1