Many studies have found MRSA to be associated with a poor Vitamin D Receptor
Resveratrol is one of the ways to activate the Vitamin D receptor
and thus get more Vitamin D to the tissues
In this study the vitamin D level in the blood was raised to a good level of 40 ng,
which is normaly enough to have a benefit
however the tissues containing the MRSA apparently did not get much

Vitamin D Receptor table shows what compensates for low VDR activation
Compensate for poor VDR by increasing one or more:

Note: 2 ways to Improve activation of the Vitamin D Receptor:
1) Adding Reveratrol
2) Taking the vitamin D infrequently (~every two weeks) instead of daily

Unknown for MRSA
Poor Receptor ==> MRSA   OR   MRSA ==> Poor Receptor
Whereas for several Cancers
Cancer ==> Poor Vitamin D Receptor    that is, a Cancer has learned how to deactive the local VDR 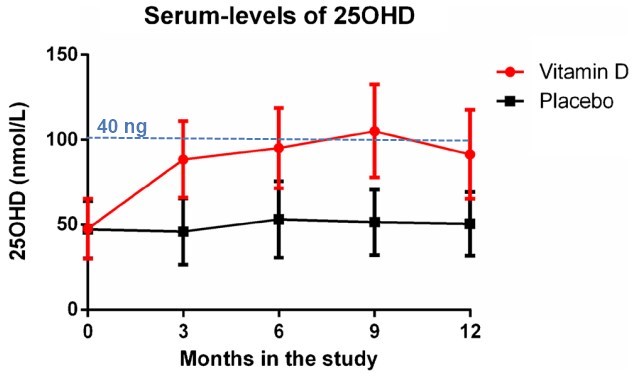 Methicillin-resistant Staphylococcus aureus (MRSA) is resistant to all beta-lactam antibiotics and can cause severe infections that are difficult to treat. Eradication strategies with conventional antibiotics are not always effective and alternative approaches are warranted. Here, we tested the hypothesis that daily supplementation with vitamin D for 12 months would reduce MRSA carriage rates among a group of persistent carriers. This was a double-blind, placebo-controlled randomized trial with n = 65 persistent MRSA carriers with 25-hydroxy vitamin D3 (25OHD) < 75 nmol/L, who were followed up with bacterial cultures at baseline and every 3 months for 1 year. The primary endpoint was the decline in MRSA positivity during the study period. The study was conducted in two MRSA outpatient clinics at the Karolinska University Hospital, Stockholm, Sweden. In total, n = 65 persistent MRSA carriers were randomized and n = 3 were lost to follow-up. Only patients deficient in vitamin D (< 75 nmol/L) were included. Vitamin D (4000 IU) or placebo/day was administered for 12 months. The decline in MRSA positivity was equal in the vitamin D and placebo group during the study period (OR, 1.00; 95% CI, 0.97-1.03; p = 0.928) and approximately 40% in both groups were MRSA-negative after 12 months. The vitamin D group produced 103 positive cultures out of 318 cultures (32.4%) from nose, throat, and perineum over the study period, whereas the placebo group produced 135/393 positive cultures (34.0%) (Fisher's exact test, p = 0.94). Vitamin D supplementation did not influence MRSA carriage. Thus, available data does not support vitamin D supplementation to persistent MRSA carriers.
Trial registration: www.clinicaltrials.gov ; NCT02178488.

MRSA Carriers not helped by 4,000 IU of Vitamin D (probably poor Vitamin D Receptor) – RCT Sept 2018         Printer Friendly PDF this page! Follow this page for updates
This page is in the following categories (# of items in each category)
Immunity 241 Vitamin D Receptor 462