Vitamin D status among the juvenile population: A retrospective study

Items in both categories Middle East and Youth are listed here:

Items in both categories Middle East and Infant-Child are listed here: 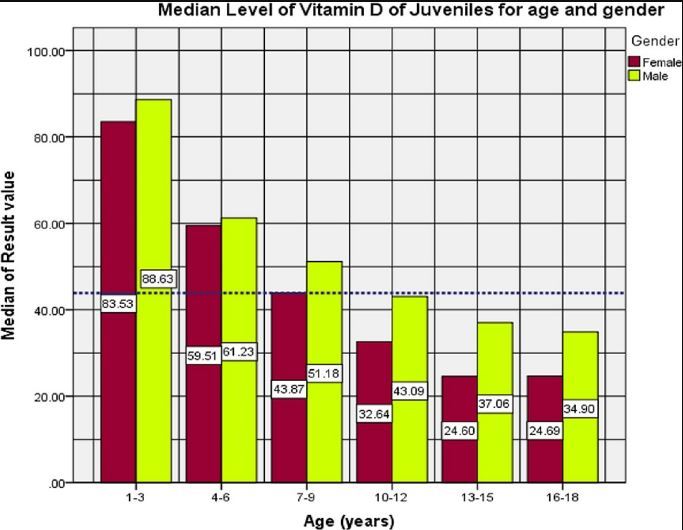 Vitamin D deficiency is a clinical problem and recently we have shown that 82.5% of our entire study cohort had inadequate serum 25(OH)D levels. In this study, we analysed serum 25(OH)D levels of juvenile patients admitted to the Burjeel Hospital of VPS Health care in Abu Dhabi, United Arab Emirates (UAE) from October 2012 to September 2014. Out of a total of 7883 juvenile patients considered in this study, almost 58.1% of females and 43.3% of males in the age group of 1–18 years were found to have low serum 25(OH)D levels (<50 nmol/L). According to the coefficient of variation, females had significantly higher variability among juveniles (63.8%) than males (49.9%). Among the juveniles group of patients, age appears to be an important determining factor for defining vitamin D deficiency.
The risk of deficiency (<30 nmol/L) was found to be present in 31.4% of patients in the age group of 10–12 years, followed by 50.4% of patients in the age group of 13–15 years and 52.9% of patients in the age group of 16–18 years. The analysed age groups of females were found to have lower levels of 25(OH)D than males. It is important and perhaps alarming to note that such high rate of vitamin D deficiency is present in the juvenile age.

Printer Friendly PDF this page! Follow this page for updates
This page is in the following categories (# of items in each category)
Middle East 127 Youth 145 Infant-Child 588
Edit Comments Files 2