894 Brazillians: age 58: Vitamin D deficiency does not vary much with skin color (Figure 3B) 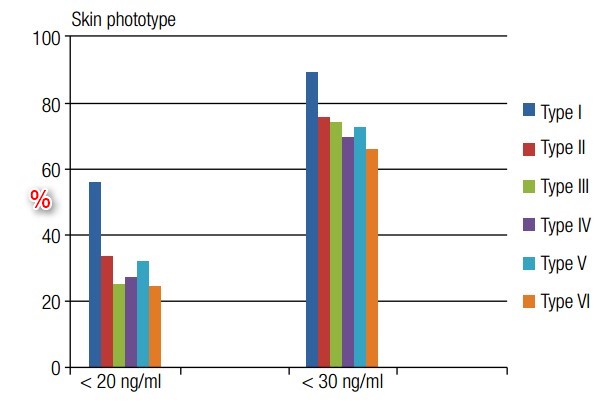 Vitamin D deficiency has been linked to bone fragility in children and adults, and to an increased risk of chronic diseases. The main sources of vitamin D are the diet and cutaneous synthesis, the latter being the most important one, since foods are relatively poor in vitamin D. The main factors influencing this endogenous production are the seasons, the time of day, latitude and skin phototype.
Due to the contribution of sun exposure in maintaining vitamin D levels, it would be expected that this deficiency would be more prevalent in countries at a high latitude; it has been shown, however, that hypovitaminosis D is commonly found in tropical regions such as Brazil. In high latitude regions in which extreme skin phototypes have been compared, the prevalence of vitamin D deficiency is more common in people with originally darker skin who have a natural barrier to the already lower UV irradiation penetrating the skin.
In Brazil, particularly in the areas where sun rays are more abundant, the difference in sunlight exposure between subjects showed no significant variation in serum 25-hydroxyvitamin D (25OHD).|

Vitamin D deficiency has been associated with bone fragility in children and adults and an increased risk of chronic diseases such as cardiovascular diseases, diabetes mellitus type 1 and 2 and cancer (1). The sources of vitamin D are cutaneous production and diet; however, only some foods naturally contain it, and few are rich in vitamin D. In Brazil, diet is usually poor in vitamin D and supplementation with multivitamin preparations is rarely seen (2). Exposure to sunlight is the main source of vitamin D and factors such as season, time of day, latitude, skin phototype, sun exposure duration, type of clothing and the use of sunscreens may influence its synthesis (3).

When the early humans, who originated in Africa, migrated northwards, skin lightening occurred, as an adaptation to the lower amount of ultraviolet irradiation required for the cutaneous synthesis of vitamin D (4). Melanin evolved as an effective natural sunscreen, decreasing the production of vitamin D in the skin, because of its capacity to absorb ultraviolet radiation (UVB) photons, as people with increased skin pigmentation require longer exposure to the sun for synthesizing the same amount of vitamin D than persons with fair skin (1). The differences in serum 25OHD levels between individuals of different ethnicities is based on the view that contemporary humans are genetically adapted to the environment of our ancestors and that the profound changes in lifestyle that have occurred over the last 10,000 years (including reduced sun exposure) have been too fast for the human genome to adjust to them (5).

The concept of skin phototype was described by Fitzpatrick (Table 1) about 3 decades ago, classifying individuals according not only to skin color, but also to the way in which they respond to repetitive sun exposure regarding melanin production (tanning) (6). Most studies to date have evaluated the differences between serum 25OHD concentrations in phototypes type I or II, compared to the darkest type (VI), claiming that less pigmented skin has higher concentrations due to its greater capacity to synthesize vitamin D (7).

Sun exposure may also be estimated using the sun index (number of hours per week of sun exposure multiplied by the fraction of the total body surface area exposed – using the rule of 9 adapted from the burning patient score) (8). There are few studies quantifying the response of serum 25OHD according to sun exposure and skin type (2).

At high latitudes serum 25OHD levels exhibit variability throughout the year, with a peak in late summer and a nadir in late winter, due to the variation in the UVB that reaches the skin (9). A paradox exists in countries with a low sun incidence, such as Norway (60°N), which show a lower frequency of vitamin D deficiency (probably because of the diet), when compared to countries with a higher solar incidence, such as those of Mediterranean Europe. In the Middle East (lower latitudes) there is a high prevalence of vitamin D deficiency, which can be explained by the habitual use of clothing covering almost the entire body (9). These locations are usually in semiarid and arid areas with year-round sunshine and little rain throughout the year (Figures 1 and 2).

Figure 2 The tropics and semiarid and arid regions globally. Adapted from Bandeira and cols. 2006 (9).

There is much debate concerning the ideal serum 25OHD concentrations. The Endocrine Society (10) recommends 30 ng/mL or above, with a parathyroid hormone plateau occurring between 30 and 40 ng/mL; the Institute of Medicine (11), on the other hand, considers levels above 20 ng/mL to be appropriate for most individuals.

Based on the important contribution of sunlight exposure to the production and maintenance of serum 25OHD levels, it would be reasonable to believe that vitamin D deficiency may be a problem restricted to countries situated at higher latitudes. However, several studies from sunny countries have shown that vitamin D deficiency is a common phenomenon, despite the abundance of sunlight in these locations, such as Brazil, making it a global health problem (12-14).

In a study on 503 volunteers (aged between 18 and 85 years) the association of ethnicity, skin color and sun exposure with serum levels of 25OHD was evaluated. It was noted that among the ethnic groups, Asians had the lowest mean (15 ng/mL), ethnicity being one of the main determinants of the variations in serum 25OHD levels (19).

In a study on construction workers in the United States a significant correlation between the sun index and serum 25OHD levels was found (8). In a study conducted in Hawaii (20°N) by Binkley and cols. (20) with a population of young surfers, vitamin D deficiency was found in 51%, using 30 ng/mL as cutoff point, despite a high rate of sun exposure in that tropical location. These results suggest that sun exposure alone is not the predominant factor in the prevention of vitamin D deficiency. Ginter and cols. (21), in a study of 224 elderly patients (> 60 years), showed a prevalence of vitamin D deficiency (< 30 ng/mL) of 40% (44°N). In this sample, individuals from three different ethnic groups were evaluated with no significant differences being found between them. Interestingly, another similar study in young patients (22) revealed lower serum 25OHD levels in individuals of non-European ancestry. The main predictors of vitamin D status were vitamin D intake (particularly from supplements) and skin pigmentation.

The prevalence of vitamin D deficiency (serum 25OHD < 30 ng/mL) in those individuals with a low sun index (< 1) was 71.2%, and in those with a higher one (> 7) it was 67.9%. These differences were very small considering the amount of sun exposure in the 2 groups. Likewise, the differences in mean serum 25OHD levels between the 2 groups, although statistically significant (25.3 vs. 27.8 ng/mL; p = 0.012), was small in absolute terms, considering the differences in the amount of sunlight that both groups of individuals were exposed to, demonstrating that, despite a high sun exposure in everyday life, the mean serum 25OHD concentrations were below 30 ng/mL in the vast majority of subjects (25) (Figure 3).

Figure 3 Distribution of vitamin D deficiency (%) according to sun index and skin phototype.

Most of the population (60.6%) had a skin phototype of III or IV, and there was no statistical significance (p = 0.158) between mean serum 25OHD levels of those with very fair skin (type I) and those with dark skin (type VI) (25).

We also conducted a study at two beaches located on the coastline of the state of Pernambuco (latitude 8°S) in order to evaluate the changes in serum 25OHD levels after prolonged sun exposure in 10 healthy subjects with pigmented skin due to frequent exposure to sunlight with more than 70% of body surface area exposed. Serum 25OHD levels increased from 22.59 ± 5.45 ng/mL to 24.39 ± 6.60 ng/mL after 4 hours of sunlight exposure and to 25.80 ± 5.81 ng/mL after one week, before the next exposure. Changes in serum 25OHD levels were fewer than expected for the intensity of sun exposure, suggesting that unprotected sun exposure can be a less appropriate approach for correction of vitamin D deficiency than oral vitamin D supplementation (26).

Note by VitaminDWiki: 4 hours of sun on 70% of body raised blood level by 3 ng

In another study from our institution on 284 elderly men from the city of Recife attending a primary care clinic, vitamin D deficiency (serum 25OHD levels < 20 ng/mL) was observed in 31.5% and insufficiency (25OHD levels < 30 ng/mL) in 66.7%. There were no significant differences in the serum 25OHD levels between individuals with higher sun exposure and those with lower sun exposure. Most individuals (66.7%) had skin phototype IV, V or VI, according to the Fitzpatrick classification (2).

In summary, regarding ethnicity, sun exposure and the differences between high and low latitudes, the data presented above suggest that in high latitude regions in which extreme skin phototypes have been compared, the prevalence of vitamin D deficiency is more common in people with originally darker skin who have a natural barrier to the already lower UV irradiation penetrating the skin.
On the other hand, in tropical regions in which extreme skin phototypes (type I and VI) are not common, higher sun exposure rates lead to tanner skins and a lower prevalence of vitamin D deficiency. However, in those areas most individuals with high rates of daily exposure to the sun have serum 25OHD below 30 ng/mL, suggesting that skin tanning limits the progressive rise in serum 25OHD towards optimal concentrations.

Comment: Most, but not all, studies disagree with this one.

Speculations which try to make sense of this data 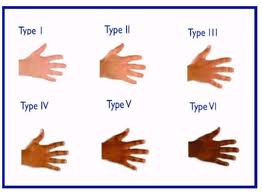 Little variation in vitamin D levels with skin color in Brazil – July 2014         Printer Friendly PDF this page! Follow this page for updates
This page is in the following categories (# of items in each category)
Skin - Dark 434